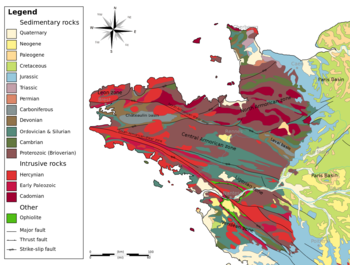 Geologic map of the Armorican Massif and surrounding areas.

The Armorican Massif (French: Massif armoricain) is a geologic massif that covers a large area in the northwest of France, including Brittany, the western part of Normandy and the Pays de la Loire. It is important because it is connected to Dover on the British side of the English Channel and there has been tilting back and forth that has controlled the geography on both sides.[1]

Its name comes from the old Armorica, a Gaul area between the Loire and the Seine rivers. The massif is composed of metamorphic and magmatic rocks that were metamorphosed and/or deformed during the Hercynian or Variscan orogeny (400 to 280 million years ago) and the earlier Cadomian orogeny (650 to 550 million years ago). The region was uplifted when the Bay of Biscay opened during the Cretaceous period. The Cantabrian Mountains and the Armorican Massif were then rift shoulders of the Bay of Biscay.

During the Neoproterozoic, older parts of the Armorican Massif formed the northern margin of the paleocontinent Gondwana. During the Paleozoic era, the Armorican Massif was part of the microcontinent Armorica, which probably also included terranes found in the Vosges, Black Forest and Bohemian Massif further east. Armorica rifted off the northern margin of Gondwana somewhere during the Ordovician or Silurian periods to move northward and collide with Laurussia during the Hercynian orogeny.

The oldest rocks of the massif are Neoproterozoic sediments of the Brioverian Supergroup which were deformed and metamorphosed during the Cadomian orogeny. These are overlain by lower Paleozoic (Cambrian to Devonian) (meta-)sediments. The whole sequence was deformed, metamorphosed and intruded by felsic magmas during the Hercynian orogeny.