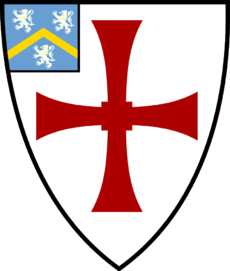 Arms of the University of Durham

Durham University has 16 colleges, of which University College is the oldest, founded in 1832. The newest college is Josephine Butler, founded in 2006. The last single sex college, St Mary's, became mixed in 2005 with the admittance of male undergraduates. One college, Ustinov, admits only postgraduates. 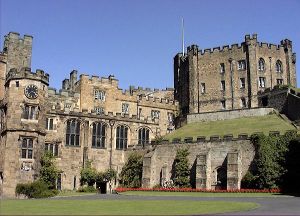 University college, the oldest of the 16 Durham Colleges

Formal dinners (known as "formals") are held at many colleges; gowns are often worn to these events. There is a great deal of intercollegiate rivalry, particularly in rowing and other sporting activities. There is also rivalry between the older colleges of the Bailey and the newer colleges of the Hill. 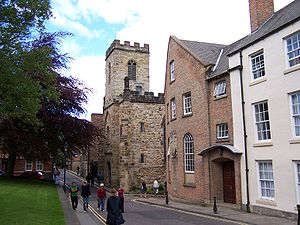 St Chad's College, one of the two independent colleges

The University is collegiate in structure. There are four different sorts of college: Maintained Colleges and Societies, Recognised Colleges, Licensed Halls of Residence, and Affiliated Colleges.

The University validates degrees at other colleges not recognised under any of the above categories. Current arrangements include the validation of the Church of England's Common Award at a number of theological colleges.[5] The Royal Academy of Dance also used to teach courses leading to degrees validated by Durham.

Most of the colleges located in Durham itself can be grouped into two areas of the city. Bailey colleges are those located on the peninsula formed by a meander of the River Wear, and Hill colleges are on Elvet Hill on the other side of the river. Queen's Campus, Stockton, is 23 miles (37 km) south of Durham, in the town of Stockton-on-Tees.

The student numbers in the table below are up to date for the 2010/11 year.

The senior member of each college is an officer known generically as the Head of College.[7] His or her specific title varies from college to college as indicated in the list below, but there is no particular significance to the variation. The heads of the maintained colleges are also part-time members of an academic department.

†The Principal of St Chad's is also officially known as 'President' (as was the head of Ushaw College). The titual head of that college is known as the 'Rector'. Similarly, the Chair of the St John's College Council is the 'President' of that College.

A number of colleges that that have been part of the University of Durham, Durham, England, but have since folded or cancelled their association with the university.

Durham University currently recognises sixteen colleges. However, since its foundation in 1832, a number of other colleges have been part of the university. Two of these have become completely defunct; others have ended their association with the university, or left to become independent institutions of their own.

Neville's Cross College was opened in 1921. It was primarily a teacher-training college; but from 1924 it was also a licensed hall of the University and admitted students to read for both undergraduate courses and postgraduate degrees. The College merged with Durham Technical College in 1977 to form New College Durham, whereupon it ceased to be associated with the University.[3]

Ushaw College was a Catholic seminary located in Ushaw Moor, a village to the west of Durham. It was opened in 1808 by scholars who had fled from Douai, France, when English College was forced to close during the French Revolution. It affiliated with Durham as 'Licensed Hall' in 1968, though it retained its role primarily as a seminary. It shut as a seminary in 2011 due to a declining number of vocations in the Catholic Church, but remains recognised as a licensed hall in the University's statutes. Part of the college is now used by Durham Business School,[11] and it is also used for conferences and lectures by the Department of Theology and Religion.[12][13]

Relations between the two campuses were often strained. They became two autonomous parts of the same university, with the Newcastle colleges merging to become King's College in 1937.[14] In 1947 a proposal to rename the university as the "University of Durham and Newcastle" was approved by all the governing bodies, but was defeated at convocation by 135 votes to 129 in the spring of 1952.[17][18] This defeat led to King's College eventually leaving the university, to create the new University of Newcastle upon Tyne in 1963.[16]

Durham University has had two affiliated colleges outside England. Of these, Fourah Bay College is a former part of the university, having ended its affiliation in 1967. It became a constituent college of the University of Sierra Leone on that date.[31] The other affiliate, Codrington College, remained listed as an affiliated college until removed in the revision of the University's statutes approved by the Queen in Council on 13 July 2011.[32]

The College of St Hild and St Bede was formed from the merger of two separate colleges in 1975. The College of the Venerable Bede (usually known as Bede College) had been an all male college formed in 1838, with St Hild's College formed as an all female college in 1858. The merged College continued as a recognised college until 1979, when it was taken over by the University and became a maintained college. Prior to this, the two colleges had specialised in the teaching of education;[33] on becoming a maintained college the teaching part of Hild Bede was separated from the College to become the University's School of Education.

The Graduate Society became a full college in 2003 and was subsequently renamed Ustinov College. The Home Students Association (for non-collegiate women) became St Aidan's Society in 1947 and subsequently St Aidan's College in 1961. Hatfield College was originally established as Bishop Hatfield's Hall, taking on its current name in 1919. St Mary's College was founded as the Women's Hostel, becoming a college and taking its current name in 1920.

Stephenson College (originally George Stephenson College) and John Snow College were created in 2001. They replaced the original University College Stockton and are located on the Queen's Campus at Stockton-on-Tees.[34]

Jesus College and Coverdale Hall are the settings for the events in Angels and Men, Durham alumna Catherine Fox's first novel (published by Hamish Hamilton in 1996). The location is nowhere stated explicitly, but it is obvious to anyone familiar with the city and the university that it takes place in Durham; Jesus and Coverdale are modelled (very closely) on St John's College and Cranmer Hall.

That Hideous Strength (1943) by C. S. Lewis is set in a fictional university town, whose resemblance to Durham is close enough to require Lewis to insist in the book's preface that it is not so.[35]