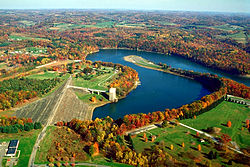 The Crooked Creek Lake Recreation Area is a dam, reservoir, and park near Ford City in Armstrong County.

Armstrong County is a county located in the U.S. state of Pennsylvania. As of the 2010 census, the population was 68,941.[2] The county seat is Kittanning.[3] The county was organized on March 12, 1800, from parts of Allegheny, Westmoreland and Lycoming Counties. It was named in honor of John Armstrong, who represented Pennsylvania in the Continental Congress and served as a major general during the Revolutionary War.

The County was named after John Armstrong, who served as a brigadier general and major general in the Revolutionary War.

Armstrong County is home to the City of Parker, an incorporated third-class city, which was an oil boom town with a population rumored to be approximately 20,000 in 1873, but now is the "Smallest City in America" with a population of just under 800. Parker is located in the extreme northwest portion of the county.

Iron was made in the Brady's Bend area of the county twenty years before there was a foundry in Pittsburgh doing so. Ford City is home to the plate-glass industry, as John Ford created the company which later became Pittsburgh Plate Glass.

Kittanning once boasted more millionnaires than anywhere else in Pennsylvania during the 1880s.

Leechburg was the first place in the United States to use natural gas for metallurgical purposes, in 1869. Natural gas was found while drilling for oil, and eventually introduced into the boilers and furnaces of Siberian Iron Works here.

Freeport, Leechburg and Apollo were communities built along the Pennsylvania Canal, which passed through on the Allegheny and Kiskiminetas rivers, at the southern border of the county.

The Allegheny and Kiskiminetas rivers; Buffalo, Crooked, Cowanshannock, Redbank, and Mahoning creeks; and Carnahan Run, among others, have watersheds within the county. The Murphy, Nicholson, Ross, and Cogley islands are in the Allegheny in Armstrong County.

Register of Wills and Recorder of Deeds:

Prothonotary and Clerk of Courts: 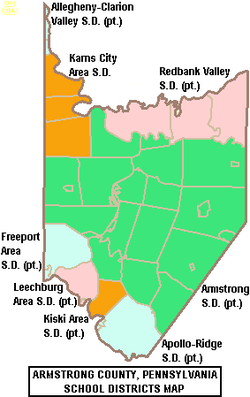 The 498 school districts of Pennsylvania, that have high schools, were ranked for student academic achievement as demonstrated by four years of writing, science math and reading PSSA results by the Pittsburgh Business Times in 2010.

As reported by the Pennsylvania Department of Education - EdNA. April 2012.

There are six public libraries in Armstrong County:[15][16] 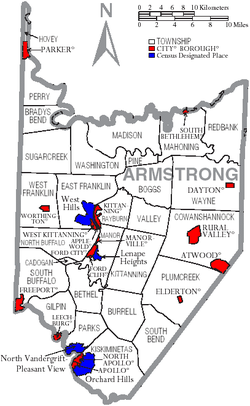 Under Pennsylvania law, there are four types of incorporated municipalities: cities, boroughs, townships, and, in at most two cases, towns. The following cities, boroughs and townships are located in Armstrong County:

The population ranking of the following table is based on the 2010 census of Armstrong County.[17]