The Army Air Corps is a component of the British Army, first formed in 1942. There are eight regiments (7 Regular Army and 1 Reserve) of the AAC as well as four Independent Flights and two Independent Squadrons deployed in support of British Army operations across the world. They are located in Britain, Brunei, Canada, and Germany. The AAC provides the offensive air elements of 16 Air Assault Brigade through Joint Helicopter Command.

The British Army first took to the sky during the 19th century with the use of observation balloons.[2] In 1911 the Air Battalion of the Royal Engineers was the first heavier-than-air British military aviation unit.[3] The following year, the Battalion was expanded into the Military Wing of the Royal Flying Corps which saw action throughout most of the First World War until 1 April 1918, when it was merged with the Royal Naval Air Service to form the Royal Air Force.[4]

Between the wars, the Army used RAF co-operation squadrons,[5] though a true army presence did not occur until the Second World War.

At the beginning of the Second World War, Royal Artillery officers, with the assistance of RAF technicians, flew Auster observation aircraft under RAF-owned Air Observation Post (AOP) Squadrons. Twelve such squadrons were raised[6][7][8] —three of which belonged to the RCAF— and each performed vital duties in a wide array of missions in many theatres.

Early in the war, Winston Churchill, Prime Minister of the United Kingdom, announced the establishment of a new branch of army aviation, the Army Air Corps, formed in 1942. The corps initially comprised the Glider Pilot Regiment and the Parachute Battalions (subsequently the Parachute Regiment), and the Air Observation Post Squadrons. In 1944, the SAS Regiment was added to the Corps.

One of their most successful exploits during the war was Operation Deadstick the attack on Pegasus Bridge, which occurred on 6 June 1944, prior to the landings on Normandy. Once the three gliders landed, some roughly which incurred casualties, the pilots joined the glider-borne troops (Ox & Bucks Light Infantry) to act as infantry. The Bridge was taken within ten minutes of the battle commencing and the men there withstood numerous attempts by the Germans to re-capture the location. They were soon reinforced and relieved by soldiers from Lord Lovat's 1 Special Service Brigade, famously led by piper Bill Millin. It was subsequently further reinforced by units of the British 3rd Division.

The AAC was broken up in 1949, with the SAS returning to its independent status, while the Parachute Regiment and Glider Pilot Regiment came under the umbrella of the Glider Pilot and Parachute Corps. The pilots who had once flown the gliders soon had to transfer to flying powered aircraft, becoming part of the RAF Air Observation Post (AOP) Squadrons, several of which were manned by reserve personnel. 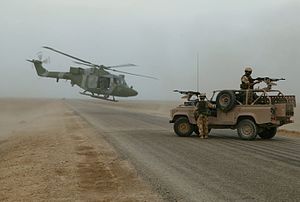 A Westland Lynx of the Army Air Corps ready to touch down on a desert road south of Basra Airport, November 2003

From 1970, nearly every army brigade had at least one Aviation Squadron that usually numbered twelve aircraft. The main rotor aircraft during the 1970s were the Westland Scout and Bell Sioux general purpose helicopters. The Sioux was replaced from 1973 by the Westland Gazelle used for Airborne recce,[10] initially unarmed, they were converted to carry 68mm SNEB rocket pods in 1982, during the Falklands War. The Scout was replaced from 1978 by the Westland Lynx capable of the additional fire power when carrying the Elite Air Door Gunners.

Basic rotary flying training was carried out on the Bell Sioux in the 1970s, the Westland Gazelle in the 1980s and 1990s and is currently conducted on the Eurocopter AS350 Squirrel.

Fixed-wing types in AAC service have included the Auster AOP.6 and AOP.9 and DHC-2 Beaver AL.1 in the observation and liaison roles. Since 1989, the AAC have operated a number of Britten-Norman Islander and Defender aircraft for surveillance and light transport duties. The corps operated the DHC-1 Chipmunk T.10 in the training role until its replacement by the Slingsby T67 Firefly in the 1990s. The Firefly was replaced by the Grob Tutor in 2010.

A further boost in the Army Air Corps' capability came in the form of the Westland Apache AH.1 attack helicopter. In 2006, British Apaches deployed to Afghanistan as part of the NATO International Security Assistance Force.

The strength of the Army Air Corps is believed to be some 2,000 Regular personnel, of which 500 are officers. However, the AAC draws an additional 2,600 personnel from the Royal Logistic Corps and the Royal Electrical and Mechanical Engineers. Therefore, total related Army Air Corps personnel is around 4,600.[11]

The AAC operates fixed-wing and rotary-wing aircraft. The AAC uses the same designation system for aircraft as the Royal Air Force and the Fleet Air Arm. Two types of fixed-wing aircraft are operated by the Corps, primarily for reconnaissance purposes: the Britten-Norman Islander AL1[12] and the Britten-Norman Defender AL1/AL2/T3. The Defenders are also employed in the command and communication role with limited use in transporting personnel. Additionally, AAC pilots use the fixed-wing Grob Tutor for Elementary Flying Training (at Army Flying Grading & DEFTS).

Today the larger section of the AAC is the rotary-wing part. Its aviators fly four types of helicopter, and within each type there are usually several marks/variants which carry out different roles. Pilots designated for rotary-wing service train at the Defence Helicopter Flying School, RAF Shawbury. The School is a tri-Service organisation consisting of civilian and military instructors that take the student from basic flying through to more advanced flying such as instrument flying, navigation, formation flying and captaincy. In service rotary-wing aircraft include: the Bell 212HP AH1,[13] the Eurocopter AS365N3 Dauphin II,[14] the Eurocopter Squirrel HT2,[15] the Westland Gazelle AH1,[16] the Westland Lynx AH9A[17] and the AgustaWestland Apache AH1.[18] 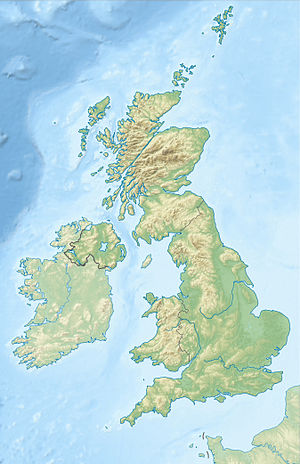 RAF Cranwell
Bases of the Army Air Corps in 2020

In the future, the current regiments will be consolidated into the following structure:[20]

1 and 9 Regt AAC will merge under one headquarters (1 Regt AAC) and re-locate to RNAS Yeovilton to form a large regiment equipped with the new AgustaWestland Wildcat helicopter not before Oct 15. The Regular component of Army Air Corps capability will consist of two regular aviation regiments equipped with Apache, one large regular aviation regiment equipped with Wildcat, and one regular manned aerial surveillance regiment,[22] although the Gazelle out-of-service date is currently 2018 and it has not yet been confirmed whether or how the capability will be replaced.[23] All five squadrons from 1 and 9 AAC. will remain. Four squadrons will be the front line Lynx Wildcat squadrons, one (652 Squadron) will become the Wildcat Operational Conversion Squadron.[24] There will be two frontline squadrons of Apache helicopters in both 3 and 4 Regiment AAC, with 3 Regiment also parenting the Apache OCU, 653 Squadron. One Regiment will be at high readiness at any one time. One of the squadrons will be attached to HMS Ocean and/or the new Queen Elizabeth-class aircraft carriers for expeditionary operations. Another will be attached to the lead armoured battlegroup.[25]

The Army Air Corps is classed, in UK military parlance, as a "Combat Arm". It therefore carries its own guidon and is awarded battle honours. The honours awarded to the AAC are: