Arnaud de Cervole, also de Cervolles, de Cervolle, Arnaut de Cervole or Arnold of Cervoles (c. 1300 – 25 May 1366), known as l'Archiprêtre (The Archpriest), was a French mercenary soldier and Brigand of the Hundred Years War in the 14th century.[1][2]

He was born into the minor nobility in what is now the Lot-et-Garonne in the Périgord somewhere around the year 1300. Even though a layman, he possessed the ecclesiastical fief of Velines in Dordogne; because of it he was called the Archpriest of Vélines (Archiprêtre de Velines).[3] He was deprived of his benefice by the archbishop of Bordeaux because he was mixing "with brigands and men of base extraction".[4] 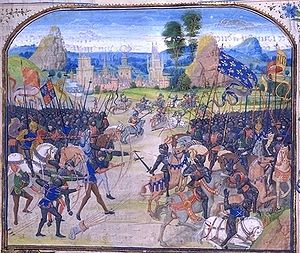 Battle of Poitiers(1356) in Froissart Chronicle.

The Archpriest quickly made a name in the world of mercenaries specializing in scaling castle walls. His meteoric rise, despite his noble status, astonished his contemporaries.

In the early 1350s, Arnaud commanded a band of 80 men in South-West France, and was known for his skill at taking walled cities and castles by escalade (ladders). He was equally known for repeatedly crossing line between military service and banditry. In 1356, he was wounded and captured after fighting in the forces of the Count of Alençon at the Battle of Poitiers.[5] After his release he married a rich widow.

In 1357 Arnaud was elected commander of the "Great Company", a loose collection of companies of freebooters of various nationalities. While most ordinary companies numbered no more than a few hundred men, the shifting membership brought at its height made up an army of about 2700 men.[4]

In 1357, Arnaud de Cervole married Jeanne de Graçay, and after Arnaud she married Enguerran of Eudin In 1358, Arnaud and his troops travelled to Avignon where Pope Innocent VI gave him 20,000 gold florins to distribute among his companions in exchange for giving up all the castles his men had occupied in the papal territories.[4]

The Dauphin Charles draws in his service until the Peace of Brétigny (1360). In 1363, after the Treaty of Brétigny, Arnaud de Cervole[6] and his men began to pillage the countryside. His was one of the many so called Tard-Venus bands, groups of mercenaries left without employment by the end of hostilities.

His troops attacked Avignon and ransomed the Pope. They then plundered Burgundy. They crossed the Rhone on July 13, 1357. 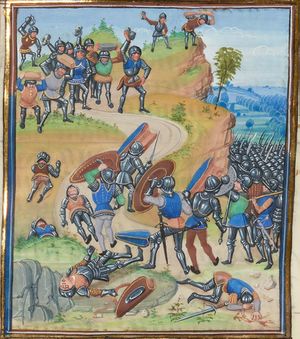 In 1362, he was hired by the French king John II to deal with brigands, dispatching him with a small royal army led by the Comte de Tancarville and the Comte de la Marche. [1] This army was defeated at the Battle of Brignais, where Arnaud was captured.[7]

Here the troops raised by the king were routed due to the betrayal of the Archpriest.[8]

In 1365, the Duke of Burgundy offered to lead a major crusade against the Turks in Hungary (to take out the companies of the kingdom of France). The crusade had the support of Pope Urban V who wanted to get rid of Tard-Venus companies operating in the Rhone Valley, but never happened.[9] Although the Archpriest did set about collecting mercenaries together, the project progressed slowly and many had dispersed again by the end of the year. A fresh attempt was made in 1366 but supply problems caused discontent.

Arnaud (as Arnaut) appears as a character in Michael Crichton's novel Timeline and its film adaptation, where he is played by Lambert Wilson.