Enoch Arnold Bennett (27 May 1867 – 27 March 1931) was an English writer. He is best known as a novelist, but he also worked in other fields such as the theatre, journalism, propaganda and films.

Bennett was born in a modest house in Hanley in the Potteries district of Staffordshire. Hanley was one of the Six Towns that were joined together at the beginning of the 20th century as Stoke-on-Trent and are depicted as "the Five Towns" in some of Bennett's novels. Enoch Bennett, his father, qualified as a solicitor in 1876, and the family moved to a larger house between Hanley and Burslem.[1] Bennett was educated in Newcastle-under-Lyme.

Bennett was employed by his father, but the working relationship failed. He found himself doing jobs such as rent-collecting which were uncongenial. Bennett also resented the low pay: it is no accident that the theme of parental miserliness is important in several of his novels. In his spare time he was able to do a little journalism, but his breakthrough as a writer came after he had left the Potteries. At the age of 21 he left his father's practice and went to London as a solicitor's clerk. 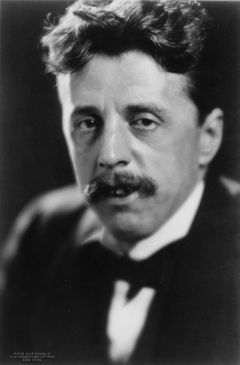 In 1889 Bennett won a literary competition run by the magazine Tit-Bits and was encouraged to take up journalism full-time. In 1894 he became assistant editor of the magazine Woman. He noticed that the material offered by a syndicate to the magazine was not very good, so he wrote a serial that was bought by the syndicate for 75 pounds (equivalent to £10,000 in 2015).[3] He then wrote another. This became The Grand Babylon Hotel. Just over four years later his novel A Man from the North was published to critical acclaim and he became editor of the magazine.

In 1900 Bennett gave up the editorship of Woman and dedicated himself to writing full-time. However, he continued to write for newspapers and magazines while finding success in his career as a novelist. In 1926, at the suggestion of Lord Beaverbrook, he began writing an influential weekly article on books for the London newspaper the Evening Standard.

One of Bennett's most popular non-fiction works was the self-help book How to Live on 24 Hours a Day. His diaries have yet to be published in full, but extracts from them have often been quoted in the British press.[4]

In 1903 Bennett moved to Paris, where other artists from around the world had converged on Montmartre and Montparnasse. Bennett spent the next eight years writing novels and plays. He believed that ordinary people had the potential to be the subjects of interesting books, and in this respect, as he himself acknowledged, he was influenced by the French writer Maupassant. Maupassant is also one of the writers on whose work Richard Larch, the protagonist of Bennett's novel A Man from the North tries in vain to model his own writing.

Bennett's novel The Old Wives' Tale had an immediate success throughout the English-speaking world when it was published in 1908. In 1911 he visited the United States, then returned to England, where The Old Wives' Tale was reappraised and hailed as a masterpiece. 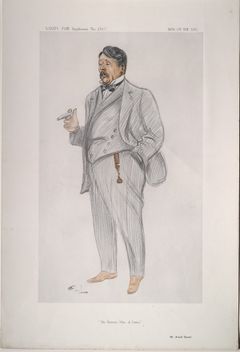 During the First World War Bennett became Director of Propaganda for France at the Ministry of Information. His appointment was made on the recommendation of Lord Beaverbrook, who also recommended him as Deputy Minister of the Department at the end of the war.[5] He refused a knighthood in 1918.

Osbert Sitwell,[6] noted in a letter to James Agate[7] that Bennett was not "the typical businessman, with his mean and narrow outlook". Sitwell cited a letter from Bennett to a friend of Agate's, who remains anonymous, in Ego 5:

I find I am richer this year than last; so I enclose a cheque for 500 pounds for you to distribute among young writers and artists and musicians who may need the money. You will know, better than I do, who they are. But I must make one condition, that you do not reveal that the money has come from me, or tell anyone about it.

Bennett separated from his French wife in 1921 and fell in love with the actress Dorothy Cheston (b. 1896), with whom he stayed for the rest of his life. She changed her last name to Bennett, although they were never married. They had one child, Virginia, born in London in 1926.[8]

Bennett died of typhoid at his home in Baker Street, London, on 27 March 1931, after returning from a visit[9] to Paris where, in defiance of a waiter's advice, he had drunk tap water in a restaurant. His ashes are buried in Burslem Cemetery. His death is believed to have been one of the last occasions when the practice of spreading straw in the street to dull the sound of traffic outside the home of a dying person was carried out in London.[10][11]

Bennett's daughter, Virginia (Mary) Bennett/Eldin (1926–2003), lived in France and was President of the Arnold Bennett Society.

References to the Staffordshire Potteries in his works

The name "Knype" may have been taken from the village of Knypersley near Biddulph, and/or Knypersley Hall.

Several of Bennett's novels set in the Potteries have been made into films, for example The Card starring Alec Guinness, or television mini-series, such as Anna of the Five Towns[12] and Clayhanger.[13]

Bennett's output was prodigious and, by his own admission, was based on maximising his income. As Bennett put it:

Am I to sit still and see other fellows pocketing two guineas apiece for stories which I can do better myself? Not me. If anyone imagines my sole aim is art for art’s sake, they are cruelly deceived.

Contemporary critics, notably Virginia Woolf, perceived weaknesses in his work. To her and other Bloomsbury authors Bennett represented the "old guard". His style was traditional rather than modern, which made him an obvious target for those who liked to present themselves as challenging literary conventions.[14][15] Max Beerbohm criticised Bennett as a social climber who had forgotten his origins, and drew a mature and well-fed Bennett expounding, "All gone according to plan, you see" to a younger and leaner version of himself, who replies: "Yes — MY plan." Bennett in his turn regarded the Bloomsberries as decadents, whose vices and general sense of life were contrary to the optimism and decency he saw in the mass of the people.

For much of the 20th century the critical and academic reception of Bennett's work was affected by the Bloomsbury intellectuals' perception and it was not until the 1990s that a more positive view of his work became widely accepted.[16] The English critic John Carey had a major influence on this reassessment. Carey praises him in his book The Intellectuals and the Masses, declaring Bennett his "hero" because his writings "represent a systematic dismemberment of the intellectuals' case against the masses".[17]

In Queen's Quorum (1951), a survey of crime fiction, Ellery Queen listed Bennett's The Loot of Cities among the 100 most important works in the genre. This collection of stories recounts the adventures of a millionaire who commits crimes to achieve his idealistic ends. Although it was "one of his least known works," it was nevertheless "of unusual interest, both as an example of Arnold Bennett's early work and as an early example of dilettante detectivism".[18] 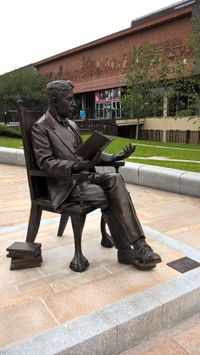 Statue of Arnold Bennett outside the Potteries Museum & Art Gallery in Hanley, Stoke-On-Trent

While Bennett was staying at the Savoy Hotel in London the chefs perfected an omelette incorporating smoked haddock, Parmesan cheese and cream, which pleased him so much that he insisted that it be prepared wherever he travelled. The Omelette Arnold Bennett has remained a standard dish at the Savoy ever since.[23]

A number of streets in the Bradwell area of Newcastle-under-Lyme, which neighbours Stoke-on-Trent, are named after places and characters in Bennett's works, and Bennett himself.

Two blue plaques have been installed to commemorate Bennett. The first, at his former residence in Cadogan Square, London was placed by London County Council in 1958.[24] The second was placed in 2014 by Stoke-on-Trent City Council at Bennett's childhood home on Waterloo Road in Cobridge.[25]

A brown plaque has also been placed by the Arnold Bennett Society on Bennett's final residence at Chiltern Court in London.[26]

A two-metre-high bronze statue of Bennett has been placed outside the Potteries Museum & Art Gallery in Hanley, Stoke-On-Trent in June 2017 during the events marking the 150th anniversary of his birth.[27]