Arnold Daniel Palmer (born September 10, 1929) is a retired American professional golfer, who is generally regarded as one of the greatest players in professional golf history. He has won numerous events on both the PGA Tour and Champions Tour, dating back to 1955. Nicknamed "The King", he is one of golf's most popular stars and its most important trailblazer, because he was the first superstar of the sport's television age, which began in the 1950s.

Palmer's social impact on behalf of golf was perhaps unrivaled among fellow professionals; his humble background and plain-spoken popularity helped change the perception of golf as an elite, upper-class pastime to a more democratic sport accessible to middle and working classes.[1] Palmer is part of "The Big Three" in golf during the 1960s, along with Jack Nicklaus and Gary Player, who are widely credited with popularizing and commercializing the sport around the world.

Palmer won the PGA Tour Lifetime Achievement Award in 1998, and in 1974 was one of the 13 original inductees into the World Golf Hall of Fame. 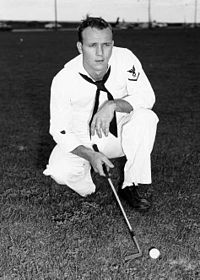 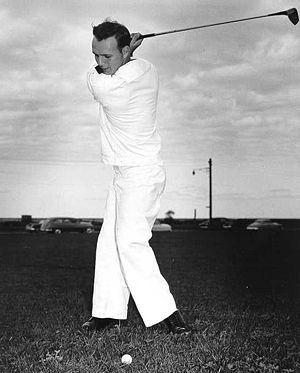 Palmer was born in the Pittsburgh suburb of Latrobe, Pennsylvania. He learned golf from his father, Milfred (Deacon) Palmer who had suffered from polio at a young age and was head professional and greenskeeper at Latrobe Country Club, allowing young Arnold to accompany his father as he maintained the course.[2]

Palmer attended Wake Forest College on a golf scholarship. He left upon the death of close friend Bud Worsham and enlisted in the United States Coast Guard, where he served for three years and had some time to continue to hone his golf skills. Palmer returned to college and competitive golf. His win in the 1954 U.S. Amateur made him decide to try the pro tour for a while, and he and new bride Winifred Walzer (whom he had met at a Pennsylvania tournament) traveled the circuit for 1955. Fred Rogers of Mister Rogers' Neighborhood, was a one-year ahead of Palmer at Latrobe high school.

Palmer won the 1955 Canadian Open in his rookie season, and raised his game status for the next several seasons. Palmer's charisma was a major factor in establishing golf as a compelling television event in the 1950s and 1960s, setting the stage for the popularity it enjoys today. His first major championship win at the 1958 Masters Tournament cemented his position as one of the leading stars in golf, and by 1960 he had signed up as pioneering sports agent Mark McCormack's first client.

In later interviews, McCormack listed five attributes that made Palmer especially marketable: his good looks; his relatively modest background (his father was a greenskeeper before rising to be club professional and Latrobe was a humble club); the way he played golf, taking risks and wearing his emotions on his sleeve; his involvement in a string of exciting finishes in early televised tournaments; and his affability.[3]

Palmer is also credited by many for securing the status of The Open Championship (British Open) among U.S. players. After Ben Hogan won that championship in 1953, few American professionals had traveled to play in The Open, due to its travel requirements, relatively small prize purses, and the style of its links courses (radically different from most American courses). Palmer was convinced by his business partner Mark McCormack that success in the Open — to emulate the feats of Bobby Jones, Walter Hagen, Sam Snead and Hogan before him — would truly make him a global sporting star, not simply a leading American golfer. In particular, Palmer traveled to Scotland in 1960, having already won both the Masters and U.S. Open, to try to emulate Hogan's feat of 1953, of winning all three in a single year. He failed, losing out to Kel Nagle by a single shot, but his subsequent Open wins in the early 1960s convinced many American pros that a trip to Britain would be worth the effort, and certainly secured Palmer's popularity among British and European fans, not just American ones.

Palmer's most prolific years were 1960–1963, when he won 29 PGA Tour events, including five major tournament victories, in four seasons. In 1960, he won the Hickok Belt as the top professional athlete of the year and Sports Illustrated magazine's "Sportsman of the Year" award. He built up a wide fan base, often referred to as "Arnie's Army", and in 1967 he became the first man to reach one million dollars in career earnings on the PGA Tour. By the late 1960s Jack Nicklaus and Gary Player had both acquired clear ascendancy in their rivalry, but Palmer won a PGA Tour event every year from 1955 to 1971 inclusive, and in 1971 he enjoyed a revival, winning four events.

Palmer was eligible for the Senior PGA Tour (now the Champions Tour) from its first season in 1980, and he was one of the marquee names who helped it to become successful. He won ten events on the tour, including five senior majors.

Palmer won the first World Match Play Championship in England, an event which was originally organized by McCormack to showcase his stable of players. Their partnership was one of the most significant in the history of sports marketing. Long after he ceased to win tournaments, Palmer remained one of the highest earners in golf due to his appeal to sponsors and the public. 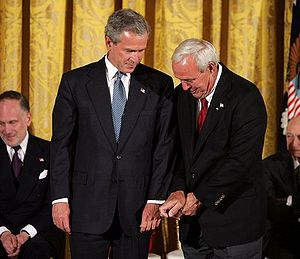 In 2004, he competed in The Masters for the last time, marking his 50th consecutive appearance in that event. After missing the cut at the 2005 U.S. Senior Open by 21 shots, he announced that he would not enter any more senior majors.

Since 2007, Palmer has served as the honorary starter for the Masters.[5] He retired from tournament golf on October 13, 2006, when he withdrew from the Champions Tours' Administaff Small Business Classic after four holes due to dissatisfaction with his own play. He played the remaining holes but did not keep score.[6] Palmer's legacy was reaffirmed by an electrifying moment during the 2004 Bay Hill Invitational. Standing over 200 yards from the water-guarded 18th green, Palmer, who is known for his aggressive play, lashed his second shot onto the green with a driver. The shot thrilled his loyal gallery and energized the excitable Palmer. He turned to his grandson and caddie, Sam Saunders, and gave him a prolonged shimmy and playful jeering in celebration of the moment.

Palmer has had a diverse golf-related business career, including owning the Bay Hill Club and Lodge, which is the venue for the PGA Tour's Arnold Palmer Invitational (renamed from the Bay Hill Invitational in 2007), helping to found The Golf Channel,[7] and negotiating the deal to build the first golf course in the People's Republic of China. This led to the formation of Palmer Course Design in 1972, which was renamed Arnold Palmer Design Company when the company moved to Orlando, Florida, in 2006. Palmer's design partner was Ed Seay. The Palmer–Seay team has designed over 200 courses around the world. Since 1971, he has owned Latrobe Country Club, where his father used to be the club professional. The licensing, endorsements, spokesman associations and commercial partnerships built by Palmer and McCormack are managed by Arnold Palmer Enterprises. Palmer is also a member of the American Society of Golf Course Architects.

A case was initiated in 1997 by Palmer and fellow golfer Tiger Woods, in an effort to stop the unauthorized sale of their images and alleged signatures in the memorabilia market, against Bruce Matthews, the owner of Gotta Have It Golf, Inc. and others. Matthews and associated parties counter-claimed that Palmer and associated businesses committed several acts, including breach of contract, breach of implied duty of good faith and violations of Florida's Deceptive and Unfair Trade Practices Act.[8] Woods was also named in the counter-suit, accused of violating the same licensing agreement.

On March 12, 2014, a Florida jury found in favor of Gotta Have It on its breach of contract and other related claims, rejected Palmer's and Woods's counterclaims, and awarded Gotta Have It $668,346 in damages.[9][10] The award may end up exceeding $1 million once interest has been factored in, though the ruling may be appealed.[citation needed]

One of Palmer's most recent[when?] products is a branded use of the beverage known as the Arnold Palmer, which combines sweet iced tea with lemonade.[11]

In 2000, Palmer was ranked the sixth greatest player of all time in Golf Digest magazine's rankings.[12]

In addition to Palmer's impressive list of awards, he has been bestowed the honor of kicking off the Masters Tournament since 2007. From 2007 to 2009, Palmer was the sole honorary starter. In 2010, longtime friend and competitor Jack Nicklaus was appointed by Augusta National to join Palmer.[16] In 2012, golf's The Big Three reunited as South African golfer Gary Player joined for the ceremonial tee shots as honorary starters for the 76th playing of the Masters Tournament.[17]

Arnold Palmer's name has been mentioned in passing many times various television shows and movies over the years. One of the more memorable instances is in Episode 2 of Season Three ( 46th overall ), of MacGyver, also entitled Lost Love : Part Two, in which Angus MacGyver and Jack Dalton have to break into a secure glass case to steal a Ming Dynasty era jade dragon. The combination, set by Mac's friend Pete Thornton, happens to be 9-10-29, which is the way an American would enter Arnold Palmer's birthday ( September 10th, 1929 ), this being so because Pete was said to be a great fan of Arnold Palmer's.

Palmer's grandson, Sam Saunders, is a professional golfer. Saunders grew up playing at Bay Hill, and won the Club Championship there at age 15. He attended Clemson University on a golf scholarship and turned pro in 2008. Saunders stated that Palmer's family nickname is "Dumpy".[19]

Palmer appears on the cover of Tiger Woods PGA Tour 14 alongside Tiger Woods.

He has been a member of the Freemasons since 1958.[22] He was raised to the sublime degree of Master Mason at Loyalhanna Lodge No. 275 in Latrobe, Pennsylvania where he remains an active member.

An avid pilot for over 50 years, Palmer thought he would pilot a plane for the last time on January 31, 2011. He flew from Palm Springs, California to Orlando, Florida in his Cessna Citation X.[23] His pilot's medical certificate expired that day and he chose not to renew it. However, public FAA records show he was issued a new third class medical in May 2011.

Arnold Palmer Regional Airport in Latrobe, Pennsylvania, is named for him. According to their website: "[The airport] started as the Longview Flying Field in 1924. It became J.D. Hill Airport in 1928, Latrobe Airport in 1935 and Westmoreland County Airport in 1978. Complimenting a rich history rooted in some of the earliest pioneers of aviation, the name was changed to Arnold Palmer Regional in 1999 to honor the Latrobe, Pennsylvania native golf legend who grew up less than a mile from the runway where he watched the world's first official airmail pickup in 1939 and later learned to fly himself."[24] There is a statue of Palmer holding a golf club in front of the airport's entrance, unveiled in 2007.

Palmer's early "fear of flying" was what led him to pursue his pilots license. After almost 55 years, he logged nearly 20,000 hours of flight time in various aircraft.[25]

Senior majors are shown in bold.

DNP = Did not play
WD = Withdrew
CUT = missed the half-way cut
"T" indicates a tie for a place
Green background for wins. Yellow background for top-10.