The Arnold Palmer Hospital for Children is a 158-bed pediatrics hospital facility located in Orlando, Florida, United States. The hospital is part of Orlando Health and is supported by the Arnold Palmer Medical Center Foundation. It was ranked as one of the nation's Top 30 pediatric hospitals for heart care and heart surgery by U.S. News & World Report, in their 2008 edition of America’s Best Children’s Hospitals.

Arnold Palmer Hospital is the only hospital in the central Florida area with an emergency/trauma department dedicated to pediatric patients. The hospital’s Congenital Heart Institute (CHI), created by a partnership with Miami Children’s Hospital, is well known for its pediatric cardiovascular services. The Congenital Heart Institute combines a select group of cardiologists, cardiac anesthesiologists, cardiovascular surgeons, physicians, nurses, intensivists and technicians to diagnosis and offer treatment to infants and children with heart disease or congenital heart disorders. The CHI is the only pediatric cardiology center to offer real time web-based surgical outcome data. 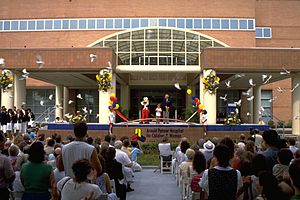 In the late 1970s, a group of local pediatricians decided that a healthcare facility dedicated solely to the care of children and women was needed for Central Florida. As a first step, the Children's Medical Foundation of Greater Orlando was founded by the group in February 1980. The group shortly changed the name to the Children's Hospital Foundation. A study conducted by Ross Laboratories concluded that special services for women, as well as children, should be included to make the hospital more successful. The Orlando Regional Medical Center (ORMC) decided to join the effort and create the hospital.

ORMC approached golf legend Arnold Palmer, who coincidentally was looking for a charity to support. Arnold and his late wife Winnie Palmer were first introduced to Orlando Health when they toured the newly opened neonatal intensive care unit and pediatrics wing of Orlando Regional Medical Center in the mid-1980s. The Children's Hospital Foundation, along with some encouragement from personal friends, convinced the Palmers to lend the “Arnold Palmer” name to the facility. The Palmers also agreed to help with the fundraising for the new hospital. ORMC decided to refurbish the old Holiday Hospital building, built in the 1960s, and construct an adjoining building of 160,000 square feet (15,000 m2). The hospital opened its doors on September 10, 1989, the date of Arnold Palmer’s 60th birthday. 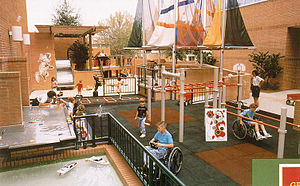 The "Playworks" play area when the hospital first opened

The hospital was designed with kids in mind and includes the ‘Playworks’ playground, which includes an interactive play area, with a pirate ship and meditation garden for patients and families.

The children's hospital is connected to the 285-bed Winnie Palmer Hospital for Women & Babies through an elevated two-level bridge. Together with the Howard Phillips Center for Children & Families, they comprise the Arnold Palmer Medical Center, the largest facility dedicated to children and women in the United States.