listen)) is a town in Ilm-Kreis, Thuringia, Germany, on the river Gera about 20 kilometres south of Erfurt, the capital of Thuringia. Arnstadt is one of the oldest towns in Thuringia, and has a well-preserved historic centre with a partially preserved town wall. The town is nicknamed Das Tor zum Thüringer Wald ("The Gateway to the Thuringian Forest") because of its location on the northern edge of that forest. Arnstadt has a population of some 25,000. The city centre is on the west side of Gera. The municipality comprises four "villages": Angelhausen–Oberndorf, Dosdorf–Espenfeld, Rudisleben, and Siegelbach. The neighbouring municipalities are Wachsenburggemeinde, Kirchheim, Alkersleben, thorn Home, Wipfratal, Plaue and Gossel.

A deed of gift issued 1 May 704 in Würzburg by the Thuringian Duke Hedan II to the Anglo-Saxon bishop Willibrord of Utrecht is the first written reference to Arnstadt ("Arnestati"), along with two other towns—the oldest documented reference of settlements in Thuringia and central and eastern Germany.[2] In 726, Arnstadt passed to the Abbey of Echternach (later known as the Abbey Hersfeld). According to historian August Beck, in 925 the territories of Henry I were extended as a bulwark against the invading Hungary.[3] On 17 December 954, Holy Roman Emperor Otto I made peace in Arnstadt with his rebellious son Liudolf of Swabia and another son, William, whom he appointed archbishop of Mainz, and decided that the Liebfrauenkirche (Church of our Lady) would be built.

In the 12th century a part of Arnstadt fell under the rule of the Counts of Kevernburg. On 8 March 1198 the princes gathered in Arnstadt and elected Philip of Swabia as King of Germany. In 1220 Arnstadt was first described as a civitas, that is, a city. On 21 April 1266, the abbot of the Abbey of Hersfeld granted a charter;[5 ] thereafter, Arnstadt became a hub for trade in timber, grain, wine and wood.

After the extinction of Kevernburger from 1302 to 1306, the counts of Schwarzburg took possession of Arnstadt. Attempts by Erfurt 1342 and 1345 to seize what was now a wealthy town failed due to the strong attachment. Arnstadt's prosperity was based on the milling industry, the cloth-making trade, tanneries, and trade in wine , wood, grain, wool, and vegetables.

On 30 January 1349 Count Günther XXI of Schwarzburg, an adversary to king Charles IV, was elected and crowned sovereign of Arnstadt in Frankfurt. He renounced this title on 26 May for 20,000 silver marks. A 1404 reference was found in 2000 to Bratwurst originating in Arnstadt, therefore the town claims its invention. In 1496, ownership of Arnstadt was divided into the supremacy Arnstadt and subrule Sondershausen. During the German Peasants' War 95 participants in the uprising were beheaded as ringleaders in the Arnstadt marketplace, on 17 June and 2 August 1525. The city was forced to pay 3000 guilders for supporting the insurgents. In 1531 the Reformation was introduced into Arnstadt. At first, even the Franciscan mendicant was the Benedictine Novodevichy Convent, 1538 secularized. From 1581 the Church of Barfüßerklosters (now the Oberkirche) was the main church of the city. In 1553, work began on the count's residence, the Neideck Castle. The water palace was completed in 1560. Since 1306 Arnstadt was ruled by the counts of Schwarzburg, and from the 16th century until 1920 it was part of Schwarzburg-Sondershausen.

With the onset of industrialisation, a residential emerged to the west and south of the old town, and industrial areas to the north. During the Second World War, it was the site of a prisoner camp, mainly for Poles and Russians. 1700 were housed in tents that contained only 100 bunks. The camp was liberated by American Forces in April 1945. A number of mass graves were discovered. 1200 civilians from the neighbouring city of Weimar were brought on a forced tour of the camp. This included a "parchment display" which displayed a "lampshade made of human skin." The display also included pieces of skin used for painting pictures.[4] After the Second World War, the town expanded further to the north along the Geratals, new residential areas emerged in the 1970s and 80s, in the east and southeast of Arnstadt, including the residential Raven Hold. Arnstadt is a manufacturing centre with glassworks and foundries, a solar panel production plant, and glove-manufacturing and wood-finishing businesses; manganese is mined in the vicinity. 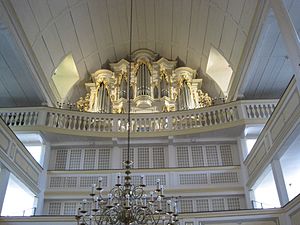 The restored Wender organ in the Bachkirche

Arnstadt has a beautifully kept old city, restricted to pedestrian traffic. Its noteworthy buildings include:

The composer Johann Sebastian Bach, whose family lived for generations in the vicinity of Arnstadt, became the organist at St Boniface's church in 1703 while he was still in his teens. He stayed there until 1707. Bach had a high opinion of Wender, the organ-builder who had recently constructed the church's organ.[5] While there is some uncertainty about which of his surviving compositions were produced in Arnstadt, there is evidence that the Wender organ, which still survives, allowed Bach to experiment with unusual modulations and harmonies. Many Bach scholars believe his well-known "Toccata and Fugue in D Minor" was composed with the Arnstadt organ in mind.[6]

The town hosts an annual high jump meet – Hochsprung mit Musik – which attracts some of the world's foremost high jumpers. Kajsa Bergqvist set a world record in Arnstadt's Sporthalle am Jahn-sportpark in 2006.[7]