Arques-la-Bataille is a commune in the Seine-Maritime department in the Normandy region in north-western France.

Arques is situated near the confluence of the rivers Eaulne, Varenne and Béthune, with the forest of Arques to the north-east. It lies 4 miles (6 km) southeast of Dieppe at the junction of the D23, D154 and D56 roads.

The center houses a castle dominating the town, which was built in the 11th century by William of Talou; his nephew, William the Conqueror, regarding it as a menace to his own power, besieged and occupied it. After frequently changing hands, it came into the possession of the English, who were expelled in 1449 after an occupation of thirty years. In 1589, its cannon decided the battle of Arques in favor of Henry IV. 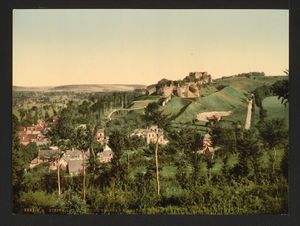 The ruined château dominating the town

Since 1869, the castle has been state property. The first line of fortification was the work of Francis I; the second line and the donjon date back to the 11th century.

The church of Arques, a building of the 16th century, preserves a stone rood screen, statuary, stained glass and other relics of the Renaissance period.

Just outside the town is the World War I Commonwealth War Graves Commission cemetery, designed by J R Truelove, the final resting place of 377 men of the South African Native Labour Corps.