From Infogalactic: the planetary knowledge core
Jump to: navigation, search
For other uses, see Arrest (disambiguation). 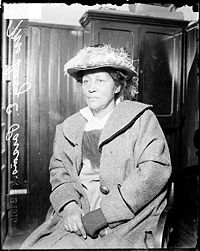 Lucy Parsons after her arrest for rioting during an unemployment protest at Hull House in Chicago, Illinois. 1915 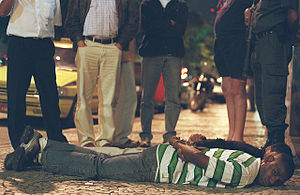 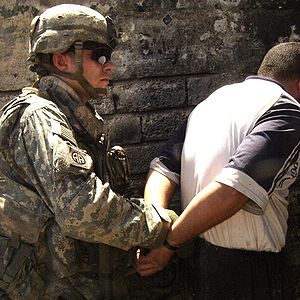 A United States Army soldier arrests a man in June 2007, during the Iraq War.

An arrest is the act of depriving a person of their liberty usually in relation to the purported investigation or prevention of crime and presenting (the arrestee) to a procedure as part of the criminal justice system. The term is Anglo-Norman in origin and is related to the French word arrêt, meaning "stop".

Arrest, when used in its ordinary and natural sense, means the apprehension of a person or the deprivation of a person's liberty. The question whether the person is under arrest or not depends not on the legality of the arrest, but on whether the person has been deprived of personal liberty of movement. When used in the legal sense in the procedure connected with criminal offences, an arrest consists in the taking into custody of another person under authority empowered by law, to be held or detained to answer a criminal charge or to prevent the commission of a criminal or further offence. The essential elements to constitute an arrest in the above sense are that there must be an intent to arrest under the authority, accompanied by a seizure or detention of the person in the manner known to law, which is so understood by the person arrested

Police and various other bodies have powers of arrest. In some places, the power is more general; for example in England and Wales, any person can arrest "anyone whom he has reasonable grounds for suspecting to be committing, have committed or be guilty of committing an indictable offence," although certain conditions must be met before taking such action.[1]

Article 9 of the Universal Declaration of Human Rights states that, "No one shall be subjected to arbitrary arrest, detention or exile."

The word "arrest" is Anglo-Norman in origin, derived from the French word arrêt meaning 'to stop or stay' and signifies a restraint of a person. Lexicologically, the meaning of the word arrest is given in various dictionaries depending upon the circumstances in which word is used. There are numerous slang terms for being arrested throughout the world. In British slang terminology, the term "nicked" is often synonymous with being arrested, and "nick" can also refer to a police station, and the term "pinched" is also common.[2] In the United States and France the term "collared" is sometimes used.[3] The term "lifted" is also heard on occasion.[4]

According to Indian law, no formality is needed during the procedure of arrest.[5] The arrest can be made by a citizen, a police officer or a Magistrate. The police officer needs to inform the person being arrested the full particulars of the person's offence and that they are entitled to be released on bail if the offence fits the criteria for being bailable.[6]

When there exists probable cause to believe that a person has committed a minor crime, such as petty theft, driving on a suspended license, or disturbing the peace, law enforcement agents typically issue the individual a citation but do not arrest them. The person must then appear in court on the date provided on the citation. Prior to the court date, the prosecution will decide whether to file formal criminal charges against the individual. When the accused appears in court, they will be advised if formal criminal charges have been filed. If charges are filed, they will be asked to plead guilty or not guilty at the initial court hearing, which is referred to as the arraignment.[7]

When a citation is issued, you have been arrested[citation needed] but released on your own recognizance based on your signature. This is often referred to as a "signature bond".

When a person is arrested for a serious crime, in California for example, the accused is entitled to be released upon reasonable bail. The accused will be advised of the bail amount, which is based upon a bail schedule that is established on an annual basis by the judges in each county. When law enforcement agents believe to have probable cause to arrest a person for a serious crime, the police typically handcuff an arrested person. The accused will have their mug shot taken and be held in a police station or jail pending their ability to post bail. If the accused cannot post bail, they will appear at their arraignment where the judge will determine if the bail set by the schedule should be raised, lowered, or remain at the initial amount.[8]

In 2010, the FBI estimated that law enforcement agencies made 13,120,947 arrests (excluding traffic violations). Of those persons arrested, 74.5% were male and 69.4 percent of all persons arrested were white, 28.0 percent were black, and the remaining 2.6 percent were of other races.[10]

Arrests under English law fall into two general categories—with and without a warrant—and then into more specific subcategories. Regardless of what power a person is arrested under, they must be informed:[11]

otherwise, the arrest is unlawful.[11] An arrest is still lawful even if the subject escapes custody before the fact they are under arrest and the grounds can be explained to them.

Arrest with a warrant

A justice of the peace can issue warrants to arrest suspects and witnesses.

Arrest without a warrant

Main article: Powers of the police in England and Wales § Arrest without warrant

There are four subcategories of arrest without warrant:

The police may arrest a person according to a warrant issued by a Magistrate under sections 31, 72, 73 or 74 of the Magistrates Ordinance. For example, an arrest warrant may be issued if an accused person does not appear in Court when he is due to answer a charge.

However, an arrest warrant is not always necessary. Under section 50(1) of the Police Force Ordinance, a police officer can "apprehend" (i.e. arrest) a person if he reasonably suspects the person being arrested is guilty of an offence. Whether there is such a reasonable suspicion in a particular case is to be determined objectively by reference to facts and information which the arresting officer has at the time of the arrest. It is not necessary that the officer knows the exact statutory provision that the suspect has violated, so long as the officer reasonably suspects that the suspect has done something amounting to an offence.[13]

See also: Right to silence in England and Wales

In the United Kingdom a person must be told that they are under arrest,[14] and "told in simple, non-technical language that he could understand, the essential legal and factual grounds for his arrest".[15] A person must be 'cautioned' when being arrested or subject to a criminal prosecution procedure, unless this is impractical due to the behaviour of the arrestee (for example, violence or drunkenness). The caution required in England and Wales states:

"You do not have to say anything, but it may harm your defence if you do not mention when questioned something which you later rely on in court. Anything you do say may be given in evidence."[16]

Deviation from this accepted form is permitted provided that the same information is conveyed.

Based on the U.S. Supreme Court ruling in Miranda v. Arizona, after making an arrest, the police must inform the detainee of their Fifth Amendment and Sixth Amendment rights in order for statements made during questioning to be admissible as evidence against the detainee in court. A Miranda warning is required only when a person has been taken into custody (i.e. is not free to leave) and is being interrogated, and the results of this interrogation are to be used in court. An officer is not required to inform a person of their Miranda rights if they will not be questioning them any further after their arrest. An officer is also not necessarily required to provide a Miranda warning if the person they are questioning has not been arrested or if a person they have arrested speaks spontaneously without being questioned. There is also an exception that permits questioning without providing the warning under circumstances involving urgent matters of public safety.

The warning must inform the detainee that they have the right to be silent and the right to have an attorney present during questioning, and the detainee must be told that what they say can be used against them and that if they want an attorney but cannot afford one, then an attorney will be provided at no cost to represent them. The failure to provide a detainee with an adequate warning could make information obtained from an interrogation inadmissible in court, but does not prevent other evidence from being used to obtain a conviction. As in the British system, the exact phrasing of the warning is not explicitly mandated under federal law. There are also additional requirements about the warning that vary from state to state and may depend on the circumstances (such as when the arrestee is a non-citizen or juvenile). Police officers often carry a copy of an exact wording with them and read from it when providing the warning, so they can later testify as to the exact wording they used as a way to show that they phrased the warning appropriately.

Immediately after the arrest, the police must inform you of your right to remain silent. You may choose whether or not to answer any questions posed by the police (except that you may need to provide your name and address to the police). The police officer will caution you by saying,

"You are not obliged to say anything unless you wish to do so but whatever you say will be put into writing and may be given in evidence."

Main article: Powers of the police in England and Wales § People or vehicles

Breach of a court order can be civil contempt of court, and a warrant for the person's arrest may be issued. Some court orders contain authority for a police officer to make an arrest without further order.

If a legislature lacks a quorum, many jurisdictions allow the members present the power to order a call of the house, which orders the arrest of the members who are not present. A member arrested is brought to the body's chamber to achieve a quorum. The member arrested does not face prosecution, but may be required to pay a fine to the legislative body.

While an arrest will not necessarily lead to a criminal conviction, it may nonetheless in some jurisdictions have serious ramifications such as absence from work, social stigma, and in some cases, the legal obligation to disclose a conviction when a person applies for a job, a loan or a professional license. In the United States, a person who was not found guilty after an arrest can remove their arrest record through an expungement or (in California) a finding of factual innocence. Of course, there are times when an arrest can be wrongful, and the charges are sometimes dropped right afterwards; the cleared person then has the choice to file a complaint or a lawsuit if they choose to. Legal action is sometimes filed against the government after a wrongful arrest.[citation needed]

For convictions, the collateral consequences are more severe in the United States than in the UK, where arrests without conviction do not appear in standard criminal record checks and need not be disclosed, whereas in the United States, people have to expunge or (if the case goes to court) seal arrest without convictions, or if the charges are dropped. However, in the UK, 'Enhanced' CRB disclosures permit a Chief Constable to disclose this data if they believe it relevant to the post for which the CRB disclosure was applied.[citation needed]