Arromanches-les-Bains (or, simply Arromanches) is a French commune in the Calvados department in the Basse-Normandie region of north-western France.

The commune has been awarded one flower by the National Council of Towns and Villages in Bloom in the Competition of cities and villages in Bloom.[2]

Arromanches-les-Bains is located some 12 km north-east of Bayeux and 10 km west of Courseulles-sur-Mer on the coast in the heart of the area where the Normandy landings took place on D-Day, 6 June 1944. Access to the commune is by the D514 road from Tracy-sur-Mer in the west passing through the town and continuing to Saint-Côme-de-Fresné in the east. The D87 road also goes from the town south to Ryes. The D65 road goes east to Meuvaines. About a third of the commune is the urban area of the town with the rest farmland.[3]

Arromanches is remembered as a historic place of the Normandy landings and in particular as the place where an artificial port was installed. This artificial port allowed the disembarkation of 9,000 tons of material per day.

It was on the beach of Arromanches that, during the Invasion of Normandy immediately after D-Day, the Allies established an artificial temporary harbour to allow the unloading of heavy equipment without waiting for the conquest of deep water ports such as Le Havre or Cherbourg. Although at the centre of the Gold Beach landing zone, Arromanches was spared the brunt of the fighting on D-Day so the installation and operation of the port could proceed as quickly as possible without damaging the beach and destroying surrounding lines of communication. The port was commissioned on 14 June 1944.

This location was one of two sites chosen to establish the necessary port facilities to unload quantities of supplies and troops needed for the invasion during June 1944, the other was built further West at Omaha Beach. The British built huge floating concrete caissons which, after being towed from England, then had to be assembled to form walls and piers forming and defining the artificial port called the Mulberry harbour. These comprised pontoons linked to the land by floating roadways. One of these ports was assembled at Arromanches and even today sections of the Mulberry harbour still remain with huge concrete blocks sitting on the sand and more can be seen further out at sea.

Today, Arromanches is mainly a tourist town. Situated in a good location for visiting all of the battle sites and war cemeteries, there is also a museum at Arromanches with information about Operation Overlord and in particular, the Mulberry harbours.[4]

On 21 September 2013 Bradford-based sand sculpting company Sand in Your Eye created a tribute called "The Fallen 9,000". It was a temporary sculpture project—a visual representation of 9,000 people drawn in the sand which equates the number of civilians, German forces and Allies that died during the D-day landings. It coincided with Peace Day, and was washed away with the tide at the end of the day.[5]

In 2010 the commune had 587 inhabitants. The evolution of the number of inhabitants is known from the population censuses conducted in the commune since 1793. From the 21st century, a census of communes with fewer than 10,000 inhabitants is held every five years, unlike larger towns that have a sample survey every year.[Note 1] 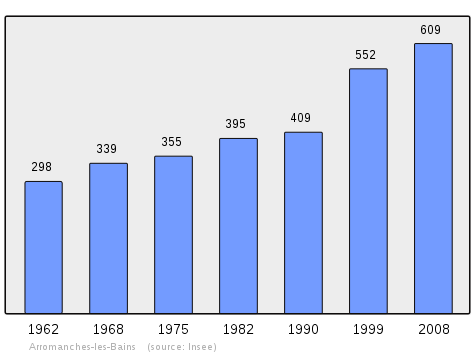 The commune has many buildings and sites that are registered as historical monuments:

Other sites of interest

The commune has several religious buildings and sites that are registered as historical monuments:

[22] The Church contains many items that are registered as historical objects:

Notable people linked to the commune