The city of Paris is divided into twenty arrondissements municipaux, administrative districts, more simply referred to as arrondissements (pronounced [aʁɔ̃dismɑ̃] in French). These are not to be confused with departmental arrondissements, which subdivide the 101 French départements. The word "arrondissement", when applied to Paris, refers almost always to the municipal arrondissements listed below. The number of the arrondissement is indicated by the last two digits in most Parisian postal codes (75001 up to 75020).

The twenty arrondissements are arranged in the form of a clockwise spiral (often likened to a snail shell), starting from the middle of the city, with the first on the Right Bank (north bank) of the Seine. The French cities of Lyon and Marseille are also subdivided in this way.

In French, notably on street signs, the number is often given in Roman numerals. For example, the Eiffel tower belongs to the VIIe arrondissement while Gare de l'Est is in the Xe arrondissement. 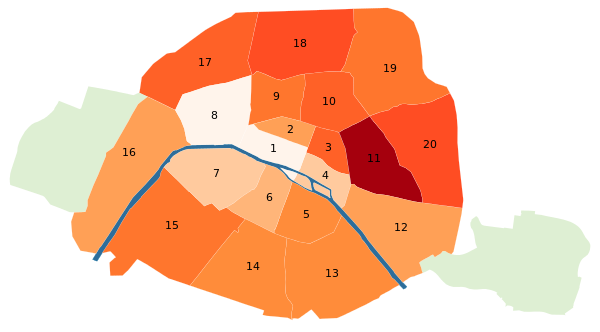 Population density map of Paris in 2012. 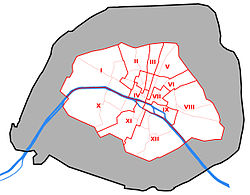 Map showing the twelve old arrondissements. The surrounding grey area shows the size of Paris after the expansion in 1860.

On 11 October 1795, Paris was divided into twelve arrondissements. They were numbered from west to east, with numbers 1-9 situated on the Right Bank of the Seine, and numbers 10-12 on the Left Bank.

Each arrondissement was subdivided into four quartiers, which corresponded to the 48 original districts created in 1790.

On 1 January 1860, a new territorial division was defined within the city by Napoleon III. The previous twelve arrondissements were rearranged with this new territory to become the present twenty.

In references to historical records (where it is important to distinguish between the old and new systems), the old arrondissements are indicated by following the number with the term ancienne ("old") (e.g. 2ème ancienne or 7ème anc.).