The Arrow Collar Man was the name given to the various male models who appeared in advertisements for shirts and detachable shirt collars manufactured by Cluett Peabody & Company of Troy, New York. The original campaign ran from 1905–31, though the company continued to refer to men in its ads and its consumers as "Arrow men" much later.

The Arrow Collar ads were a collaborative production of New York ad agency Calkins and Holden; Cluett, Peabody advertising director Charles Connolly; and commercial illustrator J. C. Leyendecker. One of Leyendecker's models was his live-in companion, a Canadian named Charles Beach.[1] Another model was a young Huntley Gordon.[2] Hundreds of printed advertisements were produced from 1907 to 1931 featuring the Arrow Collar Man. The fictional Arrow collar man became an icon, and by 1920 received fan mail. Fans would cut their favorite collar men out advertisements and hang them on their wall.[2] He inspired a Broadway musical Helen of Troy in 1923.

Today, the Arrow (officially stylized as ARROW) trademark is owned by PVH as part of its Heritage Brands division, along with Izod, Van Heusen, Warner’s, Olga, and Speedo (the latter in North America only).

In the early 1920s, Cluett, Peabody & Co. began manufacturing their shirts with attached collars in response to consumer demand and became the most successful company in the U.S. at that time. Their sales increased to 4 million collars a week and Arrow shirts with attached collars were being exported to foreign ports such as Batavia (Jakarta) and the Belgian Congo. The Arrow Collar Man campaign ended in 1930, having been one of the most successful advertising campaigns in history. 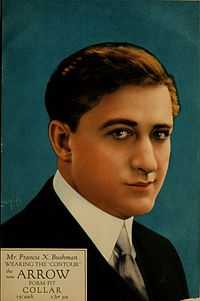