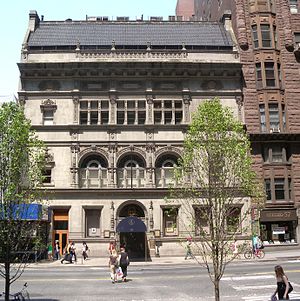 The Art Students League of New York is an art school located on West 57th Street in Manhattan, New York City, New York. The League has historically been known for its broad appeal to both amateurs and professional artists and has maintained, for over 130 years, a tradition of offering reasonably priced classes on a flexible schedule to accommodate students from all walks of life.

Although artists may study full-time, there have never been any degree programs or grades, and this informal attitude pervades the culture of the school. From the 19th century to the present, the League has counted among its attendees and instructors many historically important artists, and contributed to numerous influential schools and movements in the art world.

The League also maintains a significant permanent collection of student and faculty work, and publishes an online journal of writing on art-related topics, entitled LINEA. The journal's name refers to the school's motto Nulla Dies Sine Linea or "No Day Without a Line," traditionally attributed to the famous Greek painter Apelles by the historian Pliny the Elder, who recorded that Apelles would not let a day pass without at least drawing a line to practice his art.[1]

Founded in 1875, the League's creation came about in response to both an anticipated gap in the program of the National Academy of Design's program of classes for that year, and longer-term desires for more variety and flexibility in education for artists. The breakaway group of students included many women, and was originally housed in rented rooms at 16th Street and Fifth Avenue.[2]

When the Academy resumed a more typical, but liberalized, program, in 1877, there was some sentiment that the League had served its purpose, but its students voted to continue its program, and it was incorporated in 1878. Influential board members from this formative period included painter Thomas Eakins and sculptor Augustus Saint-Gaudens. Membership continued to increase, forcing the League to relocate to increasingly larger spaces.

In 1889, the League participated in the founding of the American Fine Arts Society (AFAS), together with the Society of American Artists and the Architectural League, among others. The American Fine Arts Building at 215 West 57th Street, constructed as their joint headquarters, has continued to house the League since 1892.[3] Designed in the French Renaissance style by one of the founders of the AFAS, architect Henry Hardenbergh (in collaboration with W.C. Hunting & J.C. Jacobsen), the building is a designated New York City Landmark[4][5] and is listed on the National Register of Historic Places.

In the late 1890s and early 1900s an increasing number of women artists came to study and work at the league many of them taking on key roles. Among them was a young Miss Wilhelmina Weber Furlong and eventually her husband Thomas Furlong (artist). The avant-garde couple served the league in executive and administrative roles and as student members throughout the American modernism movement.[6] Alice Van Vechten Brown, who would later develop some of the first art programs in American higher education, also studied with the league until prolonged family illness sent her home.[7]

In a room innocent of ventilation, the job was to draw Venus (just the head) and her colleagues. We were not allowed to hitch bodies to the heads——yet. The dead white plaster of Paris was a perfect inducer of eye-strain, and was called "The Antique." One was supposed to work from "The Antique" for two years. The advantage of "The Antique" was that all these gods and athletes were such excellent models: there never was the twitch of an iron-bound muscle. Venus never batted her hard-boiled egg eye, and the Discus-thrower never wearied. They were also cheap models and did not have to be paid union rates.

In his official biography, My Adventures as an Illustrator, Norman Rockwell recounts his time studying at the school as a young man, providing insight into its operation in the early 1900s.

The League's popularity persisted into the 1920s and 1930s under the hand of instructors like painter Thomas Hart Benton, who counted among his students there the young Jackson Pollock and other avant-garde artists who would rise to prominence in the 1940s.

In the years after World War II, the G.I. Bill played an important role in the continuing history of the League by enabling returning veterans to attend classes.[9] The League continued to be a formative influence on innovative artists, being an early stop in the careers of Abstract expressionists, Pop Artists and scores of others including Lee Bontecou, Helen Frankenthaler, Al Held, Eva Hesse, Roy Lichtenstein, Donald Judd, Knox Martin, Robert Rauschenberg, James Rosenquist, Cy Twombly and many others vitally active in the art world.

The League's unique importance in the larger art world dwindled somewhat during the 1960s, partially because of higher academia's emergence as an important presence in contemporary art education, and partially due to a shift in the art world towards minimalism, photography, conceptual art, and a more impersonal and indirect approach to art making.

As of 2010[update], the League remains an important part of New York City art life. The League continues to attract a wide variety of young artists; and the focus on art made by hand, both figurative and abstract, remains strong; its continued significance has largely been in the continuation of its original mission - to give access to art classes and studio access to all comers, regardless of their financial ability or technical background.[10]

From 1906 until 1922, and again after the end of World War II from 1947 until 1979, the League operated a summer school of painting at Woodstock, New York. In 1995, the League's facilities expanded to include the Vytlacil campus in Sparkill, New York, named after and based upon a gift of the property and studio of former instructor Vaclav Vytlacil.[11]

Since its inception, the Art Students League has employed notable professional artists as instructors and lecturers. Most engagements have been for a year or two, and some, like those of sculptor George Grey Barnard, were quite brief.

Others have taught for decades, notably Frank DuMond and George Bridgman, who taught anatomy for artists and life drawing classes for some 45 years, reportedly to 70,000 students. Bridgman's successor was Robert Beverly Hale. Other longtime instructors included the painters Frank Mason (DuMond's successor, over 50 years), Kenneth Hayes Miller (forty years) from 1911 until 1951, sculptor Nathaniel Kaz (50 years), Peter Golfinopoulos (over 40 years), Knox Martin (over 40 years), and the sculptors William Zorach (30 years), and Jose De Creeft, American impressionist William Merritt Chase (over 20 years), and Robert Brackman (19 years), and Will Barnet (50 years) from the 1930s to the 1990s. Fashion illustrator Dagmar Freuchen (20 years) from the late 1940s to the 1970s.