Arthur Henry "Art" Young (1866–1943) was an American cartoonist and writer. He is most famous for his socialist cartoons, especially those drawn for the left wing political magazine The Masses between 1911 and 1917.

Art Young was born January 14, 1866, near Orangeville, in Stephenson County, Illinois. His family moved to Monroe, Wisconsin, when he was a year old. He enrolled in the Chicago Academy of Design in 1884, where he studied under J. H. Vanderpoel. His first published cartoon appeared the same year in the trade paper, Nimble Nickel. Also in that same year, he began working for a succession of Chicago newspapers including the Evening Mail, the Daily News, and the Tribune.

In 1888, Young resumed his studies, first at the Art Students League of New York (until 1889), then at the Académie Julian in Paris (1889–90). Following a long convalescence, he joined the Chicago Inter-Ocean (1892), to which he contributed political cartoons and drawings for its Sunday color supplement.

In 1895 he married Elizabeth North. In 1895 or 1896, he worked briefly for the Denver Times, then moved again to New York City after his separation with North, where he sold drawings to the humor magazines Puck, Life, and Judge, and drew cartoons for William Randolph Hearst's New York Evening Journal and Sunday New York American. From 1902 to 1906, Young studied rhetoric at Cooper Union in order to improve his skills as a cartoonist.

Young started out as a generally apolitical Republican, but gradually became interested in left wing ideas, and by 1906 or so considered himself a socialist. Young would begin increasingly to associate with such political leftist as John Sloan and Piet Vlag, both of whom he would work with at the radical socialist monthly, The Masses. He became firmly ensconced in the radical environment of Greenwich Village after moving there in 1910. He became politically active, and by 1910, racial and sexual discrimination and the injustices of the capitalist system became prevalent themes in his work. Young would explain these sentiments in his autobiography, Art Young: His Life and Times (1939),

I am antagonistic to the money-making fetish because it sidetracks our natural selves, leaving us no alternative but to accept the situation and take any kind of work for a weekly wage [...] We are caught and hurt by the system, and the more sensitive we are to life's highest values the harder it is to bear the abuse.[1]

One facet of the establishment Young challenged in his cartoons and drawings was the Associated Press. His attacks became overt and damning once he joined the staff of the Masses as a co-editor and contributor. He held this position from 1911 to 1918. Young was one of the few original editorial members that stayed with the magazine for its entire run until it folded in December 1917. In July 1913, the magazine published Young's cartoon "Poisoned at the Source", which depicted the AP's president, Frank B. Noyes, poisoning a well labeled "The News" with lies, suppressed facts, slander, and prejudice. The cartoon was a response to the lack of national news coverage on the Paint Creek-Cabin Creek strike of 1912 in Kanawha County, West Virginia. The strike had lasted more than a year, and was characterized by deadly clashes between miners and militia hired by the coal companies. The coal companies were successful in having the Federal government declare martial law under a military tribunal, an egregious act according to the editors of the Masses.

The fact that little had been heard about these occurrences outside of West Virginia troubled those on the magazine's staff. Young's cartoon and Max Eastman's editorial, published in the same issue, claimed the AP had willfully suppressed the facts in order to aid the coal companies. The AP responded in kind with two suits of libel against Eastman and Young on November 1913 and January 1914. Both suits eventually were dropped after Young and Eastman's attorney subpoenaed the records of the AP's Pittsburgh office, possibly out of fear that the testimony and evidence would be damaging after becoming public through the legal proceedings.

In 1918 Young subsequently helped to establish a similar publication to the Masses, the above-mentioned Liberator. He also served as an illustrator and Washington correspondent for Metropolitan Magazine (1912–17) until the magazine released him due to his outspoken anti-war sentiments. In 1918, Young again ran unsuccessfully for public office on the Socialist ticket, this time for the New York State Senate.

Unhappy with the way that editors Max and Crystal Eastman and a few others were able to live off the struggling magazine, while he received a nominal fee or worked pro bono, Young left The Liberator in 1919 to start a magazine of his own, Good Morning This publication was later absorbed by the Art Young Quarterly in 1922.

Young also contributed illustrations to The Nation, The Saturday Evening Post and Collier's Weekly, New Leader, New Masses, The Coming Nation, Dawn, The Call, The New Yorker (after 1930), and Big Stick. Of the many books he wrote, two, On My Way (1928) and Art Young: His Life and Times (1939), are autobiographical. Of special note are his series of drawings depicting Hell, published in Cosmopolitan magazine and in several books, including Through Hell With Hiprah Hunt, available at Google Books.[2] He issued a collection of his drawings, The Best of Art Young, in 1936. 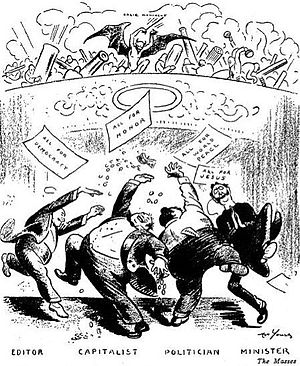 Having Their Fling by Art Young was brought into court as evidence during the second trial in September/October 1918.

Young would continue to get himself into legal trouble with his drawings during his years at the Masses. In October 1917, Art Young, Max Eastman, John Reed, Floyd Dell, Merrill Rogers, and a one-time contributor were charged under the Espionage Act by the federal government on the charge of conspiracy to obstruct enlistment. The trial began in April the following year and Young was asked to justify his cartoon "Having Their Fling" in which four men, an editor, a capitalist, a politician, and a minister are depicted dancing in orgiastic bliss as Satan leads a band of war implements. Young stated he was simply illustrating General Sherman's well-known saying that "war is hell." It seemed appropriate to Young, then, to have Satan as the conductor. The first trial ended in a hung jury. The official tally was 11-1 for conviction.

The second trial began in September 1918, and it was as full of humor and irreverence as the first, perhaps more humorous for the historian than for Young. Throughout the trial, Young had the tendency to nap, an act that brought him dangerously close to being charged with contempt of court. Afraid Young would get into more trouble than he already was, his attorneys insisted he be awakened and given a pencil and pad. Young took the pencil and pad and quickly completed a self-portrait. The drawing, "Art Young on Trial for His Life", appeared in the Liberator in June 1918. The cartoon depicted Young slumped in a chair, dozing the trial away.

Young's propensity for napping worked to the defendant's advantage during the closing arguments. Prosecutor Barnes, wrapped in an American flag and giving a moving speech, told a story of a dead soldier in France. This soldier, Barnes claimed, "is but one of a thousand whose voices are not silent. He died for you and he died for me. He died for Max Eastman. He died for John Reed. He died for Merrill Rogers. He demands that these men be punished."[3] Roused from his slumber by the impassioned speech, Young exclaimed, "What! Didn't he die for me too?" The beautiful oration successfully ruined, the second jury was unable to convict or acquit. Eight jurors voted for acquittal and four for conviction. It would be the last time Young appeared in court for the charges, as they were dropped after failing twice to garner any convictions.

Young's papers are housed in the Special Collections Library of the University of Michigan in Ann Arbor.