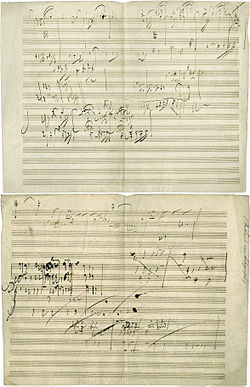 Art music—also known as formal music,[1] serious music,[2] erudite music,[3] or legitimate music[4][5] (sometimes shortened to legit music)[6] —is an umbrella term that refers to musical traditions, implying advanced structural and theoretical considerations[7] and a written musical tradition.[8] The notion of art music is a frequent and well-defined musicological distinction, e.g., referred to by musicologist Philip Tagg as one of an "axiomatic triangle consisting of 'folk', 'art' and 'popular' musics."[9] He explains that each of these three is distinguishable from the others according to certain criteria.[9] The main tradition in the Western world is usually called classical music. In this regard, it is frequently used as a contrasting term to popular music and traditional or folk music.[8][10][11]

This term is mostly used to refer to music descending from the tradition of Western classical music. This is the common definition referred by many musicologists and scholars, including Susan McClary,[12] Lawrence Kramer,[13] Theodor Adorno,[14] Deryck Cooke,[15] Joseph Swain,[16] Nicholas Cook, Nicola Dibben,[17] Philip Tagg,[18] and Gregory Booth and Terry Lee Kuhn.[19] Many of these authors, however, tend to be critical or prudent with respect to certain implications of this classification. Those authors most particularly associated with critical musicology movement and popular music studies like Tagg tend to reject latent social elitism that has sometimes been associated with this classification.

Some other authors interested in music theory may define art music differently. Musician Catherine Schmidt-Jones for example defines art music as "a music which requires significantly more work by the listener to fully appreciate than is typical of popular music." In her view, "[t]his can include the more challenging types of jazz and rock music, as well as Classical."[20]

While often used to refer primarily to Western historical classical music, the term may refer to:

While earlier musicological approaches tended to consider art music in an elitist way, asserting the superiority of art music over other forms of music (for example Adorno[22]), many modern musicologists (most particularly ethnomusicologists) dispute the notion of superiority. In a recent international musicology colloquium dedicated to music and globalization,[23] some ethnomusicologists such as Jean During insisted that no matter the technicity and difficulty of music, every musical tradition has the same dignity and no one can claim any superiority over another.[24]

Moreover, in some cases the distinction between popular and art music has been blurred, particularly in the late 20th century.[8]

The term primarily refers to classical traditions (including contemporary as well as historical classical music forms) that focus on formal styles, invite technical and detailed deconstruction[7] and criticism, and demand focused attention from the listener. In strict western practice, art music is considered primarily a written musical tradition,[8] preserved in some form of music notation, as opposed to being transmitted orally, by rote, or in recordings (like popular and traditional music).[8][25] Historically, most western art music has been written down using the standard forms of music notation that evolved in Europe beginning prior to the Renaissance period and reaching its maturity in the Romantic period. The identity of a "work" or "piece" of art music is usually defined by the notated version, rather than a particular performance of it (as for example with classical music).

However, other cultural classical traditions may refer to oral transmission. Treatises on the structural and theoretical considerations underlying Indian classical music have been available for millennia, notably the Natyashastra of Bharata, dated to between 200 BC and 200 AD. Some Western classical composers, notably Messiaen, relied on Indian rhythmic frameworks for their rhythmically more sophisticated compositions.[26]

In some western modern or experimental forms, the written notation of art music may depart from standard musical notation and use a variety of new types of notation to facilitate the exploratory nature of these new forms of music. In other words, while the notation may not be formal or traditional, there remains an element of formality or intellectual discipline to the construction and communication of the content of the work.