File:Artemis Orthia location en.svg The Sanctuary of Artemis Orthia, an Archaic site devoted in Classical times to Artemis, was one of the most important religious sites in the Greek city-state of Sparta.[1]

The cult of Orthia[2] (Greek Ὀρθία) was common to the four villages originally constituting Sparta: Limnai, in which it is situated, Pitana, Kynosoura and Mesoa. Chronologically speaking, it probably came after the cult to the city-goddess Athena Πολιοῦχος (Polioũkhos) "protectress of the city" or Χαλκίοικος / Khalkíoikos "of the bronze house".

The sanctuary is located in a natural basin between Limnai and the west bank of the Eurotas River, outside ancient Sparta, above the reach of all but the severest flooding. The oldest relics, pottery fragments from the late Greek Dark Ages, indicate that the cult has probably existed since the 10th century BC, but not before (Rose in Dawkins 1929:399).[3] Originally, the cult celebrated its rituals on a rectangular earthen altar, built up by the ashes of successive sacrifices. At the very beginning of the 8th century BC, the temenos was paved with river stones and surrounded by a trapezoidal wall. A wood and stone altar was then built as well as a temple. The works were financed by the wars waged by Sparta.

A second temple was built in 570 BC, during the joint reign of Leon of Sparta and Agasicles as military successes provided funds. The terrain was raised and consolidated, undoubtedly following erosion caused by the Evrotas. An altar and a temple of limestone, oriented the same way as the previous buildings, were built on a bed of river sand. The surrounding wall was also enlarged, and at this stage took on a rectangular form. The second temple was entirely rebuilt in the 2nd century BC, except for the altar, which was replaced in its turn in the 3rd century AD when the Romans built an amphitheatre to welcome tourists to the diamastigosis (see below); its concrete preserved many fragments and inscriptions of the earlier structures. 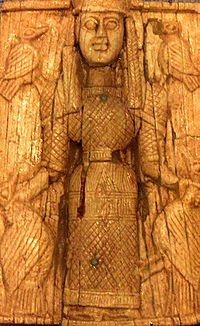 Archaic (pre-Classical) representation of the goddess on an ivory votive offering (National Archaeological Museum of Athens) may reflect the cult image.

Originally, the cult of Orthia was a pre-anthropomorphic[citation needed] and pre-Olympian religion. The inscriptions simply mentioned Orthia.[4]

The cult addressed a xoanon (archaic wooden effigy) of malevolent reputation, for it was reputedly from Tauride, whence it was stolen by Orestes and Iphigenia, according to Euripides. Orientalizing carved ivory images found at the site show the winged goddess grasping an animal or bird in either hand in the manner of the Potnia Theron; half-finished ivories from the site show that their facture was local (Rose in Dawkins 1929:400).

I will give other evidence that the Orthia in Lacedaemon is the wooden image from the foreigners. Firstly, Astrabacus and Alopecus, sons of Irbus, son of Amphisthenes, son of Amphicles, son of Agis, when they found the image straightway became insane. Secondly, the Spartan Limnatians, the Cynosurians, and the people of Mesoa and Pitane, while sacrificing to Artemis, fell to quarrelling, which led also to bloodshed; many were killed at the altar and the rest died of disease.

Whereat an oracle was delivered to them, that they should stain the altar with human blood. He used to be sacrificed upon whomsoever the lot fell, but Lycurgus changed the custom to a scourging of the ephebos, and so in this way the altar is stained with human blood. By them stands the priestess, holding the wooden image. Now it is small and light, but if ever the scourgers spare the lash because of a lad's beauty or high rank, then at once the priestess finds the image grow so heavy that she can hardly carry it. She lays the blame on the scourgers, and says that it is their fault that she is being weighed down. So the image ever since the sacrifices in the Tauric land keeps its fondness for human blood. They call it not only Orthia, but also Lygodesma (Λυγοδέσμα - Willow-bound), because it was found in a thicket of willows, and the encircling willow made the image stand upright." (Description of Greece III, 16, 9–11)[5]

According to Plutarch, writing in Life of Aristides (17, 8), the ceremony is a reenactment memorializing an episode in the Greco-Persian Wars.[6]

In addition to the flagellation of the diamastigosis, the cult entailed individual dances by young men and dances by choruses of girls. For the young men, the prize is a sickle, which implies an agricultural ritual.

The presence of ex-votos (votive offerings) attests to the popularity of the cult: clay masks representing old women or hoplites as well as lead and terracotta figures showing men and women playing the flute, lyre, or cymbals, or mounting a horse.

The archaic winged Artemis, represented in many ex-votos from the 8th century to the later sixth, lingered longest here as Artemis Orthia. Dedicatory inscriptions invoke either Orthia or Artemis Orthia, but never the mononym Artemis. 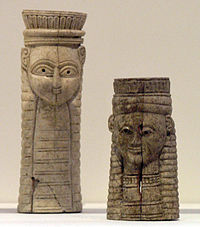 The cult of Orthia gave rise to διαμαστίγωσις / diamastigosis (from διαμαστιγῶ / diamastigô, "to whip harshly"), where the éphēboi were flogged, as described by Plutarch, Xenophon, Pausanias, and Plato. Cheeses were piled on the altar and guarded by adults with whips. The young men would attempt to get them, braving the whips. At least to the Roman era, the priestess could control the force of the flogging; according to Pausanias, she carried the xoanon during the ritual, and if it grew too heavy for her she would blame the floggers as described above.

During the Roman period, according to Cicero, the ritual became a blood spectacle, sometimes to the death, with spectators from all over the empire.[7] An amphitheatre had to be built in the 3rd century AD to accommodate the tourists. Libanios indicates that the spectacle was attracting the curious as late as the 4th century AD.

Excavation of the site

The site was brought to light by the British School of Archaeology during their digs in Laconia, 1906-10. At the time, the unexcavated site appeared to consist only of a ruined Roman theatre, largely pillaged after the foundation of modern Sparta in 1834, and about to collapse into the river. The archaeologists, under the leadership of R. M. Dawkins, quickly found evidence of Greek occupation. Dawkins writes, "The Roman theatre was easy to protect...a large quantity of ancient objects which by the light they shed on primitive Sparta, have given this dig capital significance." A long, continuous sequence of archaeological strata was revealed. While most important finds went to the local and national museum in Athens, a significant share of the excavated material ended up in the British Museum.[8]

The first campaign lasted five seasons during which Dawkins published A History of the Sanctuary in 1910. It was marked by an intense focus on stratigraphy. The 1924–1928 campaign in Sparta also included a cleanup of the Orthia site in 1928.

Other sanctuaries devoted to Artemis: