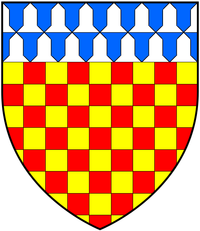 Arms of Chichester: Chequy or and gules, a chief vair 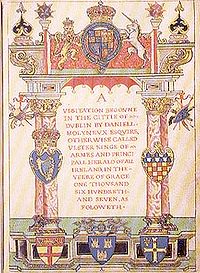 Frontispiece of the manuscript of the 1607 heraldic visitation by Ulster King of Arms Daniel Molyneux, undertaken in Dublin. On the right hand column are shown the arms of Arthur Chichester, 1st Baron Chichester of Belfast, then Lord Deputy of Ireland

Arthur Chichester, 1st Baron Chichester of Belfast (May 1563 – 19 February 1625), (known between 1596 and 1613 as Sir Arthur Chichester), was an English administrator and soldier who served as Lord Deputy of Ireland from 1605 to 1616. He was instrumental in the founding and expansion of Belfast, now Northern Ireland's capital. Several streets are named in honour of himself and his nephew and heir Arthur Chichester, 1st Earl of Donegall, including Chichester Street and the adjoining Donegall Place, site of the Belfast City Hall.

After attending Exeter College, Oxford, favoured by many Devonians, Chichester commanded HMS Larke against the Spanish Armada in 1588. In 1595 he accompanied Sir Francis Drake on his last expedition to the Americas. Later in the Anglo–Spanish War he commanded a company during the 1596 raid on Cádiz, for which he was knighted.[3][4] A year later he was with English forces in France fighting with King Henry IV against the Spanish in Picardy. He was wounded in the shoulder during the Siege of Amiens in 1597 which city was captured from the Spanish. He was knighted by the French king for his valour.

His career in Ireland began when in 1598 Robert Devereux, 2nd Earl of Essex appointed him Governor of Carrickfergus, following the death of his brother Sir John Chichester. John Chichester had been killed at the Battle of Carrickfergus in 1597, the previous year. It is said that John Chichester was decapitated, and his head used as a football by the MacDonnell clan after their victory. James Sorley MacDonnell, commander of the clan's forces at the Battle of Carrickfergus, was poisoned in Dunluce Castle on the orders of Robert Cecil to placate Chichester.[5] During the Nine Years' War Chichester commanded royal troops in Ulster. His tactics included a scorched earth policy. He encircled O'Neill's forces with garrisons, effectively starving the Earl's troops. In a 1600 letter to Cecil he stated "a million swords will not do them so much harm as one winter's famine". While these tactics were not initially devised by Chichester, he carried them out ruthlessly, gaining a hate-figure status among the Irish. O'Neill's weakening military position forced him to abandon and destroy his capital at Dungannon.

Following the signing of the Treaty of Mellifont, he succeeded Charles Blount, 1st Earl of Devonshire as Lord Deputy of Ireland from 3 February 1605.[6] A year later in 1606 he married Lettice Perrot, widow successively of Walter Vaughan of Golden Grove, Carmarthenshire, and John Langhorne of St Brides, Pembrokeshire, and daughter of Sir John Perrot, a former Lord Deputy of Ireland.

Lord Deputy Chichester saw Irish Catholicism as a major threat to the crown. He oversaw widespread persecution of Catholics, and ordered the execution of two bishops, including the aged and respected Conor O'Devany. His relations with the traditionally Catholic nobility of the Pale, in particular the quarrelsome and turbulent Christopher St Lawrence, 10th Baron Howth, were poor. In Howth's violent feuds with the new English settler families, particularly Thomas Jones, Archbishop of Dublin and his son, and Viscount Moore of Drogheda, Chichester invariably sided against Howth, but was unable to completely break his influence as he was a favourite of King James I.

Following the Flight of the Earls in 1607, Chichester was a leading figure during the Plantation of Ulster. Initially he intended that the number of Scottish planters would be small, with native Irish landowners gaining more land. However, after O'Doherty's Rebellion in Donegal in 1608, his plans changed and all the native lords lost their land. Most of the land was awarded to wealthy landowners from England and Scotland. However Chichester successfully campaigned to award veterans of the Nine Years' War land as well, funded by the City of London Livery Companies.

Chichester was instrumental in the founding and expansion of Belfast, now Northern Ireland's capital. In 1611 he built a castle on the site of an earlier 12th century Norman motte-and-bailey.[7] In 1613 he was given the title "Baron Chichester". Ill health in 1614 led to his retirement and his term of office was ended in February 1616.[8] In his final years he built a mansion in Carrickfergus and served as an ambassador to the Habsburg Empire.

In 1606 he married Lettice Perrot, widow successively of Walter Vaughan of Golden Grove, Carmarthenshire, and of John Langhorne of St Brides, Pembrokeshire, and daughter of Sir John Perrot, a former Lord Deputy of Ireland. By her he had an only son who died an infant:

He died from pleurisy in London in 1625 and was buried seven months later in St Nicholas' Church, Carrickfergus. The Barony of Chichester became extinct on his death but was revived the same year in favour of his younger brother Edward Chichester, 1st Viscount Chichester. Edward's son was Arthur Chichester, 1st Earl of Donegall.

The family's influence in Belfast is still evident. Several streets are named in its honour, including Donegall Place, site of the Belfast City Hall and the adjacent Chichester Street.