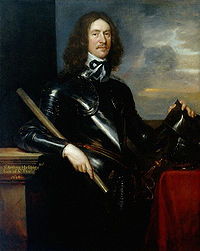 Sir Arthur Haselrig, 2nd Baronet (1601 – 7 January 1661)[1] was an English politician who sat in the House of Commons between 1640 and 1659. He was one of the Five Members of Parliament whom King Charles I tried to arrest in 1642, an event which led to the start of the English Civil War. He fought for the Parliamentarian cause in the Civil War and later tried to uphold the republic against Cromwell's autocracy, Lambert's attempt at military control and Monck's Royalist conversion in favour of the Restoration.

Haselrig was the eldest son of Sir Thomas Hesilrige, 1st Baronet (alternative spellings "Heselrig" and "Haselrigge"), of Noseley Hall, Noseley, Leicestershire, and of Frances Gorges, daughter of Sir William Gorges, of Alderton, Northamptonshire.[2] From an early age he imbibed strong puritanical principles and showed a special antagonism towards Archbishop Laud.

In April 1640, Haselrig was elected Member of Parliament for Leicestershire in the Short Parliament He was re-elected MP for Leicestershire for the Long Parliament in November 1640.[3] He was heavily involved in the Act of Attainder against Thomas Wentworth, Earl of Strafford, the Root and Branch Bill and the Militia Bill of 7 December 1641. Charles I tried to arrest him for treason on 3 January 1642, along with John Hampden, Denzil Holles, John Pym and William Strode. However the so-called "Five Members", together with the peer Edward Montagu, 2nd Earl of Manchester who was also due to be arrested, were tipped off by Robert Devereux, 3rd Earl of Essex. The king marched with his guards into the chamber of the House of Commons chamber only to find that the Five Members had fled.

Haselrig was very active in the First English Civil War on the Parliamentarian side. He raised a troop of horse for the Earl of Essex and fought at the Battle of Edgehill. He was a commander in the West under William Waller, being nicknamed his fidus Achates, and led his cuirassiers, who were known as the London lobsters. He and his troops distinguished themselves at the Battle of Lansdowne on 5 July 1643 where his men defeated Sir Beville Grenville's Pikemen, although the battle is traditionally seen as indecisive. They lost at the Battle of Roundway Down on 13 July to Prince Rupert. At both of these battles he was wounded. At the Battle of Cheriton, his men defeated Sir Henry Bard's cavalry charge, seriously weakening Hopton's army in the west. This battle was a turning point in the war and the king's secretary Sir Edward Walker said that after Cheriton, instead of an offensive war they were forced to make a defensive war.

Haselrig supported Oliver Cromwell in his dispute with the Earl of Manchester and the Earl of Essex. When the Self-denying Ordinance was approved by Parliament he gave up his commission and became one of the leaders of the Independent party in Parliament. On 30 December 1647 he was appointed governor of Newcastle, which he successfully defended, besides defeating the Royalists on 2 July 1648 and regaining Tynemouth. In October he accompanied Cromwell to Scotland, and gave him valuable support in the Scottish expedition in 1650. Between 1647 and 1650 Haselrig and his son brought a large amount of property in the north east which included the manors of Bishop Auckland, Middleham, Easingwoodborough and Wolsingham at a total cost of over £22,500.[2]

Haselrig approved of the king's execution but declined to act as a judge at his trial. He was one of the leading men in the Commonwealth, but he was antagonised by Cromwell's expulsion of the Rump Parliament, and he opposed the Protectorate refusing to pay taxes. Haselrig considered Cromwell to be a traitor to the cause after this as he was a staunch republican and opposed to all rule by a single person whether by hereditary succession or military might. Ludlow one of his opponents admitted "to do him justice .. I must acknowledge that I am under no manner of doubt concerning the rectitude and sincerity of his intentions. For he made it his buseness to prevent arbitrary power wherever he knew it to be affected, and to keep the sword subserviant to the civil magistrate".

On Cromwell's death Haselrig refused support to Richard Cromwell, and was instrumental in his downfall. He was elected MP for Leicester for the Third Protectorate Parliament in 1659[3] and became one of the most influential men in both the Council of State and Parliament. He tried to keep a republican Parliamentary administration, "to keep the sword subservient to the civil magistrate". He opposed the schemes of John Lambert who was resisting parliamentary control over the military. In one altercation Lambert complained that the army was being held at ransom; Haselrig replied that "You are only at the mercy of Parliament who are your friends" to which Lambert replied "I know not why they should not be at our mercy as well as we at theirs." Anger at the independence of the army resulted in nine leading officers, including Lambert, being cashiered. Lambert reacted by calling out the army and blocking all routes to parliament putting guards upon its doors.

After Lambert had halted Parliament, Haselrig decided to restore Parliament. The strength of the army in London called for another location, and for a variety of reasons Portsmouth was chosen. Portsmouth had strong naval traditions and had always maintained independence from the army; it benefitted from defensible fortifications on its land side and the support of Admiral Lawson ensured that the city would not fall easily to a protracted siege. Haselrig knew the area well having campaigned around Hampshire during the civil war. The newly appointed Governor Whetham was a republican who had declared that his men would support him. Whetham was a friend of General Monck in Scotland who had the best forces in Britain at his disposal and who had declared himself for parliament in October. On 4 December 1659 Haselrig met with his allies in the Red Lion Inn having arrived at 4 in the afternoon. By the next day a declaration was posted calling for citizens to "restore Parliament to their former freedom, being the peoples indubitable and undoubted birthright" Hurst Castle and the Isle of wight soon declared for Parliament. The military government, which was now named the Committee of Safety, despatched a force hoping that pro-army members would open the gates. However the Commander of the army Colonel Rich entered into negotiations and his men decided to join Haselrig. Word soon spread and soon Hull and Plymouth were recorded to be going the same way. The army council unsure of support of its troops restored the Rump Parliament by 26 December. On 29 December Haselrig marched to London entering parliament still in his riding clothes. Haselrig was at the height of his power as the major figure in a restored republic and was appointed to the Council of State on 2 January 1660. On 11 February he became a commissioner for the army.

Monck and the Restoration

However Monck had begun to march south from Coldstream on the 1 January. Lambert moved to face Monck but knowing the strength of Monck's forces and the doubtful loyalty of his own troops avoided engagement. Monck avoided answering questions as to his intentions and by 3 February entered London. Haselrig, trusting to his assurance of fidelity to the "Good Old Cause" consented to the retirement of his regiment from London. The Rump Parliament was dissolved and Haselrig found himself marginalised by the unfolding events. A new Convention Parliament came in on 31 April and by 8 May Charles II was proclaimed King. At the Restoration Haselrig's life was saved by Monck's intervention, but he was imprisoned in the Tower of London where he died on the 7 January 1661.

Clarendon described Haselrig as "an absurd, bold man." He was rash, "hare-brained," devoid of tact and had little claim to the title of a statesman, but his energy in the field and in parliament was often of great value to the parliamentary cause." He exposed himself to considerable obloquy by his exactions and appropriations of confiscated landed property though the accusation brought against him by John Lilburne was examined by a parliamentary committee and adjudged to be false.

Haselrig married firstly Frances Elmes, daughter of Thomas Elmes of Lilford Hall, Northamptonshire, by whom he had two sons and two daughters. He married secondly Dorothy Greville, sister of Robert Greville 2nd Lord Brooke, by whom he had three sons and five daughters.[2]