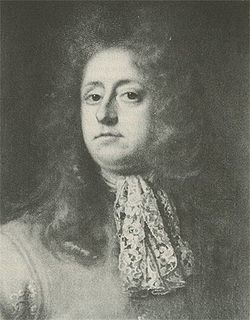 Arthur Herbert, 1st Earl of Torrington (c. 1648 – 13 April 1716) was an English admiral and politician of the late 17th and early 18th century. Cashiered as a rear-admiral by James II of England in 1688 for refusing to vote to repeal the Test Act, which prevented Catholics from holding offices, he brought the Invitation to William to The Hague, disguised as a simple sailor. As a reward he was made commander of William's invasion fleet during the Glorious Revolution.

Arthur was the son of the Attorney General and Lord Keeper of the Great Seal, Sir Edward Herbert of Aston, Montgomeryshire by his wife, Margaret, daughter of the Master of Requests, Thomas Smith of Abingdon, Berkshire (now Oxfordshire) & Parson's Green, Middlesex, and widow of Thomas Carey of Sunninghill Park, Berkshire. He was brother of Chief Justice Herbert, member for Dover, Master of the Robes, and rear-admiral of England. He was much loved by the sailors, and was reputed one of the best of the aristocratic class of naval officers. It had been generally supposed that he would readily comply with the royal wishes; for he was heedless of religion, he was fond of pleasure and expense, he had no private estates, his places (offices or employments) brought him in £4,000 a year, and he had long been reckoned among the most devoted personal adherents of James. When, however, the rear-admiral was closeted, and required to promise that he would vote for the repeal of the Test Act, his answer was, that his honour and conscience would not permit him to give any such pledge. "Nobody doubts your honour", said the King; "but a man who lives as you do ought not to talk about his conscience." To this reproach—a reproach which came from a bad grace from the lover of Catharine Sedley—Herbert manfully replied:- "I have my faults, sir; but I could name people who talk much more about conscience than I am in the habit of doing, and yet lead lives as loose as mine." He was dismissed from all his places. -- (Macaulay, Thomas Babington. History of England. 2 vols)

In May 1689 he was raised to the peerage as Baron Herbert of Torbay and Earl of Torrington.[1]

During the reign of William and Mary, he served as Lord High Admiral (1689) and then First Lord of the Admiralty (1689–1690). Torrington played an important role in the War of the Grand Alliance, commanding the English and Dutch fleets at the Battle of Beachy Head (30 June 1690 O.S), a serious defeat for the allied fleet. He was imprisoned in the Tower of London and court-martialed for failing to support the Dutch van squadron against the French, but was acquitted. Nevertheless he lost his position as First Lord of the Admiralty. The stories that Torrington was not a popular commander, because of his reputation of being a drunk and his habit of taking several prostitutes with him to sea, are in fact untrue.[2]

In connection with his 1690 operations against the French, the Earl is credited with being the first to use the expression, 'fleet in being'. Torrington proposed avoiding a set battle, except under very favorable conditions, until the arrival of reinforcements. By maintaining his fleet in being, he would force the French to remain in the area and prevent them from undertaking other operations.