Arthur I, Duke of Brittany

Arthur I (29 March 1187 – probably 1203) was 4th Earl of Richmond and Duke of Brittany between 1196 and 1202. He was the posthumous son of Geoffrey II, Duke of Brittany and Constance, Duchess of Brittany. Geoffrey was a son of Henry II of England, younger than Richard I but older than John. In 1190 Arthur was designated heir to the throne of England and its French territory by his uncle, Richard I,[1] the intent being that Arthur would succeed Richard in preference to Richard's younger brother John. Nothing is recorded of Arthur after his incarceration in Rouen Castle in 1203, and his precise fate is unknown.

Arthur was born in 1187, the son of Constance of Brittany and Geoffrey II of Brittany, who died before he was born. As an infant, Arthur was second in line to the succession of his grandfather King Henry II, after his uncle Richard. King Henry II died when Arthur was 2 years old, and Richard became the new king in his place.

While Richard I was away on the Third Crusade, Arthur's mother Constance made actions to make the Duchy of Brittany more independent. On November 11, 1190, Richard betrothed Arthur to a daughter of Tancred of Sicily as part of their treaty.[2] However, Emperor Henry VI conquered the Kingdom of Sicily in 1194, so the betrothal of Arthur came to nothing.

A marriage plan, originally aiming to establish an alliance between King Richard and Philip II Augustus of France, to marry Arthur's elder sister Eleanor to Philip's son Louis also failed. In 1196, Constance had the young Arthur proclaimed its duke as a child of nine years. The same year, Richard again nominated Arthur as his heir and summoned him, as well as his mother Constance, to Normandy, but Ranulf de Blondeville, 6th Earl of Chester, stepfather of Arthur, abducted Constance. Richard marched to Brittany to rescue Arthur, who was then secretly carried to France to be brought up with Louis. 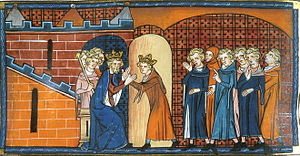 When Richard died on April 6, 1199, on his deathbed he proclaimed his brother John as his heir, fearing Arthur was too young to look after the throne. Arthur was only twelve years old at the time and under the influence of the French king. John immediately claimed the throne of England, but much of the French nobility were resentful at recognizing him as their overlord. They preferred Arthur, who declared himself vassal of Philip. Philip recognized Arthur's right to Anjou, Maine, and Poitou. Upon Richard's death Arthur led a force to Anjou and Maine. From April 18, he styled himself as Duke of Brittany, Count of Anjou and Earl of Richmond.[3]

The Treaty of Le Goulet was signed by the kings John of England and Philip II of France in May 1200 and meant to settle once and for all the claims the Norman kings of England had as Norman dukes on French lands, including, at least for a time, Brittany. Under the terms of the treaty, Philip recognised John as King of England as heir of his brother Richard I and thus formally abandoned any support for Arthur I, Duke of Brittany.[lower-alpha 1] John, meanwhile, recognised Philip as the suzerain of continental possessions of the Angevin Empire.

Philip had previously recognised John as suzerain of Anjou and the Duchy of Brittany, but with this he extorted 20,000 marks sterling in payment for recognition of John's sovereignty of Brittany.[lower-alpha 2]

Battle against John of England 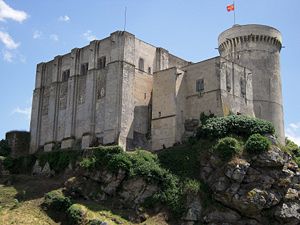 Chateau de Falaise, where Arthur was imprisoned by John I

After the signing of the Treaty of Le Goulet, and feeling offended by Philip, Arthur fled to John, his uncle, and was treated kindly, at least initially. However, he later became suspicious of John and fled back to Angers. Some unidentified source said that in April 1202, Arthur was again betrothed, this time to Marie of France, a daughter of Philip II and Agnes of Andechs-Merania.[3]

After his return to France, and with the support of Philip II, Arthur embarked on a campaign in Normandy against John in 1202. Poitou revolted in support of Arthur. The Duke of Brittany besieged his grandmother, Eleanor of Aquitaine, John's mother, in the Château de Mirebeau. John marched on Mirebeau, taking Arthur by surprise on 31 July 1202. Arthur was captured by John's barons on 1 August, and imprisoned in the Château de Falaise in Falaise, Normandy.

At the Chateau de Falaise, Arthur was guarded by Hubert de Burgh. According to contemporaneous chronicler Ralph of Coggeshall, John ordered two of his servants to mutilate the duke. Hubert de Burgh refused to let him be mutilated.[lower-alpha 3] [lower-alpha 4] The following year Arthur was transferred to Rouen, under the charge of William de Braose. Arthur vanished in April 1203. 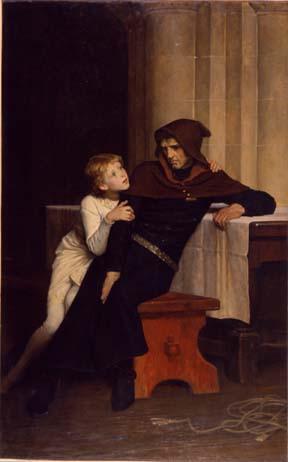 Arthur's disappearance gave rise to various stories. One account was that Arthur's gaolers feared to harm him, and so he was murdered by John directly and his body dumped in the Seine. The Margam annals provide the following account of Arthur's death:

After King John had captured Arthur and kept him alive in prison for some time, at length, in the castle of Rouen, after dinner on the Thursday before Easter, when he was drunk and possessed by the devil ['ebrius et daemonio plenus'], he slew him with his own hand, and tying a heavy stone to the body cast it into the Seine. It was discovered by a fisherman in his net, and being dragged to the bank and recognized, was taken for secret burial, in fear of the tyrant, to the priory of Bec called Notre Dame de Pres.

William de Braose was rumoured to have committed Arthur's alleged assassination.[lower-alpha 5] Many years after Arthur's disappearance, and after a conflict with King John, William de Braose's wife Maud de Braose personally and directly accused the King of murdering Arthur.[lower-alpha 6] Not only the Bretons, but even the king of France, Philip II, was ignorant of what actually happened, whether Arthur was alive or dead, if the former, where, and if the latter, how.[4] Whatever his fate, Arthur left no known issue.

The mystery surrounding Arthur's death complicated his succession. This succession was presumably influenced by both King John and King Philip II.[lower-alpha 7] There were no male heirs to the ducal crown and so his succession as duke was constrained to several choices among his sisters.

His sister Eleanor, Fair Maid of Brittany was also King John's prisoner. Eleanor also presented a complicating factor, if not a threat, to John's succession plans as King of England. She remained imprisoned for her entire life, through the reign of John's actual successor Henry III of England. While imprisoned, she never married and had no issue. Her imprisonment and the fact that she was located in England made it impossible for her to reign as hereditary Duchess of Brittany.

Arthur I was succeeded by his half-sister, Alix of Thouars, the daughter of Constance and her third husband Guy of Thouars.[lower-alpha 8] 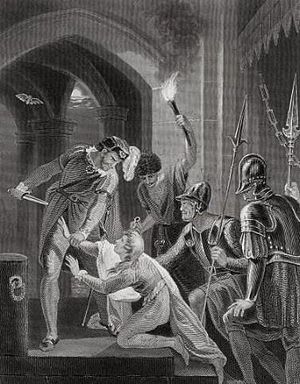 The death of Arthur is a vital ingredient in Shakespeare's history play The Life and Death of King John, in which Arthur is portrayed as a child whose innocence dissuades Hubert de Burgh from committing the murder demanded by King John. However, Arthur soon dies after jumping from his place of confinement in an escape attempt.

Arthur is also the principal character of an alternative history novel by the eccentric English writer Frederick Rolfe ('Baron Corvo'), entitled Hubert's Arthur, posthumously published by A. J. A. Symons in 1935. The novel started as a collaboration between Rolfe and Harry Pirie-Gordon, but in the event the latter only supplied the copious heraldic details pertaining to the characters. This is presented as the lengthy narrative of the aged Hubert de Burgh, who is supposed to have saved Arthur's life and accompanied him on crusade to the Holy Land, where he becomes King of Jerusalem and eventually returns to England, defeats King John and kills his son Henry Plantagenet (the historical Henry III) in single combat. The remainder of the book details the prosperous reign of King Arthur, his defeat of the Barons under Simon de Montfort, and his eventual death. Of all Rolfe's novels this one has never been reprinted, perhaps because of the strong strain of anti-semitism, which draws upon the myths of Christian boys martyred by Jews, such as St. Hugh.[citation needed]

In the novel Saving Grace by Julie Garwood, the heroine finds documents relating to Arthur's murder, committed under the orders of King John, by two of King John's barons. She is married to a Scottish Laird, Gabriel MacBain, to escape England, but is harassed by both King John's barons and the English faction hoping to take down King John, each party unsure of how much she knows.

In Randall Garrett's alternate-history fantasy stories, the Lord Darcy series, Richard does not "succumb to his illness", but survives it. John Lackland never becomes king, and the Plantagenet line, descending from Arthur, continues down to the present day.

In The Devil and King John by Philip Lindsay Arthur is killed by John in a fit of temper, but he is shown as a rebellious adolescent who did provoke John to some extent, rather than the innocent child in some versions. In his introduction Lindsay acknowledged that he had no evidence that this is what happened to Arthur, but he considered it to be as good a guess as any.

In 1912 the Breton composer Joseph-Guy Ropartz composed a symphonic poem, La Chasse du Prince Arthur (Prince Arthur's Hunt) after the poem by Brizeux. The Breton folk-rock band Tri Yann have made a song about Arthur's life.[5]