Sir Arthur Ingram (ca. 1565 – 1642) was an English investor, landowner and politician who sat in the House of Commons at various times between 1610 and 1642. Responsible for the construction, purchase and sale of many manor houses and estates in Yorkshire, the Ingram family are most associated with Temple Newsam which became the seat of the wealthy family for over 300 years.

Ingram was born at Thorpe-on-the-Hill (near Leeds)[1] some time between 1565 and 1570. The second son of Hugh Ingram of Rothwell and Ann Goldthorpe of York, he came from a poor working-class background to become the most extensive landowner in Yorkshire and one of the richest men in the country at the time.[2] He became a linen draper in London and married Anne, the daughter of a wealthy haberdasher, Richard Goldthorpe, formerly Lord Mayor of York and the MP for the city.[1][3]

Ingram was an influential man, and obtained the Controllership of the Customs for the port of London from 1601. He worked extensively as an investment consultant and trade advisor and later moved into real estate.[2] He was responsible for the sale of Castleford Mills in 1607 and Castleford Manor in 1610.[2] In 1610 he was elected Member of Parliament for Stafford in a by-election.[4]

Through an agent for the Crown, Ingram took a share in a lease on the Yorkshire alum works when it went bankrupt in 1608 (a lease granted by the Crown on Ingram's own recommendation). When the alum works failed again in 1612, Ingram secured for himself a charge of about one-fifth of pensions paid to the lessees. The treasury investigated the alum works, finding it remarkably costly in pensions, defalcations, repairs and other payments. The commission solved little but allowed Ingram an opportunity to renegotiate his lease on more favorable terms. In 1618, the works were involved in a scandal where it was proved the Earl of Suffolk had been involved in corrupt transactions with Ingram. Suffolk's wrongdoing included a litany of other offenses but the punishment for both him and Ingram was light. Rather, Ingram obtained sole lease of the works in 1621, after which the Crown's monopoly on alum continued as it had from the start: costing much and producing little.[5]

In 1612, Ingram was appointed as Secretary of the Council of the North and was knighted by James I in 1613.[1][2] He was elected MP for New Romney in 1614,[4] In 1615 he became Cofferer of the Household.[2][6] However, he was soon blackballed from court because of his working-class background and shrewd business practices.[6] He moved back to Yorkshire and became highly active in real estate development.[2][7][8] 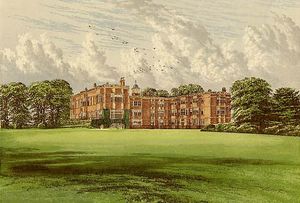 In 1619 Ingram built a new mansion on the site of the former Archbishop's Palace in York.[2] He served as High Sheriff of Yorkshire in 1620. In 1621 he was elected MP for Appleby.[4] In the same year he acquired from the Crown the ruinous Sheriff Hutton Castle in the Forest of Galtres, north of York; he employed its cut stone in building Sheriff Hutton Park nearby. In 1622 he purchased the manor house at Temple Newsam and estate from the Duke of Lennox (who had been granted it by King James I) for £12,000.[9][10] Temple Newsam is a Tudor-Jacobean house with grounds landscaped by Capability Brown and lies to the east of Leeds, just south of Halton Moor, Halton, Whitkirk and Colton. As Ingram became more prosperous, his power and ties increased.

In 1624 Ingram was elected MP for both Appleby and for York and probably chose to sit for York. He was re-elected MP for York in 1625, 1626 and 1628 and sat until 1629 when King Charles I dispensed with parliament for eleven years.[4]

In April 1640, Ingram was elected MP for Windsor for the Short Parliament and in November 1640, he became the MP for Callington for the Long Parliament.[4] He erected a new manor house at Hill Top, Knottingley shortly before his death in August 1642.[2]

Ingram was survived by three sons; the oldest, William, studied at Cambridge University and became a divine.[13] His flamboyant grandson Henry joined the court in exile of Charles II and was rewarded with the title of Viscount of Irvine after the Restoration.[10][14]