Ponsonby is often quoted as the author of the dictum "When war is declared, truth is the first casualty", published in his book Falsehood in War-time, Containing an Assortment of Lies Circulated Throughout the Nations During the Great War (1928). However, he uses this phrase in quotation marks as an epigram at the start of the book and does not present it as his own words. Its likely origin is the almost identical line spoken in 1917 by the United States Senator Hiram Johnson: "The first casualty when war comes is truth".[1]

Ponsonby was a Page of Honour to Queen Victoria from 1882 to 1887. He was educated at Eton College and Balliol College, Oxford, before joining the Diplomatic Service and taking assignments in Constantinople and Copenhagen.

At the 1906 general election, Ponsonby stood unsuccessfully as Liberal candidate for Taunton. He was elected as Member of Parliament for Stirling Burghs at a by-election of 1908.

In Parliament, Ponsonby opposed the British involvement in the First World War, and with George Cadbury, Ramsay MacDonald, E. D. Morel, Arnold Rowntree, and Charles Trevelyan, he was a member of the Union of Democratic Control, which became a prominent anti-war organization in Britain.

Ponsonby was defeated at the 1918 general election, when he stood as an "Independent Democrat" in the new Dunfermline Burghs constituency.[2] He then joined the Labour Party and returned to the House of Commons at the 1922 general election as member for the Brightside division of Sheffield.[2] 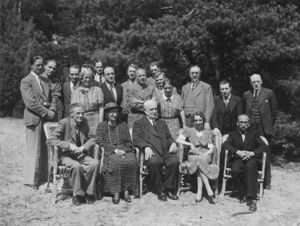 In 1930, Ponsonby was raised to the peerage with as an hereditary Baron, taking the title Lord Ponsonby of Shulbrede from his home at Shulbrede Priory in Sussex. He served as leader of the Labour Party in the House of Lords from 1931 until 1935, resigning because he was opposed to the party's policy on sanctions against Italy for its invasion of Abyssinia.

In 1927–1928, Ponsonby ran a significant Peace Letter campaign against British preparations for a new war, and from 1936 he was an active member of the Peace Pledge Union, contributing regularly to Peace News.

Ponsonby opposed the initiative of Lord Charnwood and Cosmo Gordon Lang, Archbishop of Canterbury, to ask his Majesty's Government to react against the genocidal Holodomor policies of the Soviet Government.[3][4]

In May 1940 Ponsonby resigned from the Labour Party, opposing its decision to join the new coalition government of Winston Churchill.

He wrote a biography of his father which won the James Tait Black Memorial Prize in 1942: Henry Ponsonby, Queen Victoria's Private Secretary: His Life and Letters.

Ponsonby died on 23 March 1946 and was succeeded by his son Matthew Henry Hubert Ponsonby.

On 12 April 1893 he married Dorothea Parry, daughter of Hubert Parry and Elizabeth Maude Herbert (1851–1933), herself a daughter of Sidney Herbert, 1st Baron Herbert of Lea. They had one son, Matthew, and a daughter, Elizabeth, who during the 1920s became well known as a leading figure of the Bright Young People.[5]