He before to embarking on his political career, Summerfield had become well known in Michigan as the owner of one of the largest General Motors automobile dealerships in the state; and one of the largest in the Midwest. On July 22, 1918, Summerfield married, the former Miriam Wealthy Graim, (Born in Alma, Michigan on September 7, 1898 - Died in Flint, Michigan on February 12, 1987). They had two children:

Summerfield ran unsuccessfully for the governorship of his home state of Michigan in 1946. He served as the chairman of the Republican National Committee between 1952 and 1953. At the 1952 Republican National Convention he played a key role in winning the GOP presidential nomination for General Dwight Eisenhower. As Michigan's delegate chairman Summerfield convinced the large, uncommitted Michigan delegation to support Eisenhower, thus providing "Ike" with a major boost before the voting.

In December 1952, President-Elect Eisenhower chose Summerfield as the federal Postmaster General; he served in that post from 1953 until 1961. His assistant postmaster was former U.S. Representative Ben H. Guill of Texas.

As postmaster general, Summerfield oversaw attempts to reform and modernize the Post Office and the U.S. mail system, which was still conducting many sorting and processing operations by hand. Summerfield called for an increase in postage rates to subsidize the purchase of new mechanized mail processing and sorting equipment. Some of this equipment was adopted, including the Hamper-Dumper internal mail sorting/transport system and the Mail-Flo Letter Processing System, which used conveyors to speed mail processing. However, rapidly increasing mail volume and postal deficits prevented the Post Office from completely modernizing and mechanizing all of its many post offices. To improve the Post Office's image with the public, Summerfield began a promotional campaign designed to showcase Post Office achievements. On October 7, 1954, Summerfield appeared on the ABC television network to introduce an innovative anthology series, The Mail Story, subtitled Handle with Care. The semi-documentary and dramatic program ended its run on December 30, 1954.[1]

On July 4, 1955, in order to highlight its new image as a modern organization, the Post Office adopted a new red, white, and blue color scheme for all Post Office collection boxes, trucks, delivery vans, and equipment, as well as new technology and procedures for mail delivery. As part of that effort, Summerfield supported experiments with rocket-delivered mail, using the missile mail carrier. The first and only flight of the missile mail carrier occurred on June 8, 1959, when a letter-stuffed Regulus cruise missile was successfully launched from the U.S. Navy submarine USS Barbero.

Summerfield died in West Palm Beach, Florida on April 26, 1972, at the aged of 73. Summerfield is interred in Sunset Hills Cemetery in Flint, Michigan. 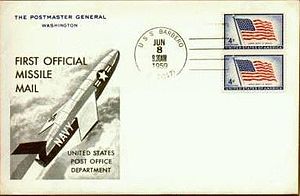 Summerfield's book, U.S. Mail The Story of the United States Postal Service (By Summerfield as told to Charles Hurd) was published in 1960.

Before man reaches the moon your mail will be delivered within hours from New York to California, to England, to India or to Australia by guided missiles.... We stand on the threshold of rocket mail.