Arthur William Brown (1881–1966) was a Canadian commercial artist, most known for his work as an illustrator for the Saturday Evening Post, American Magazine, and Redbook.[1] 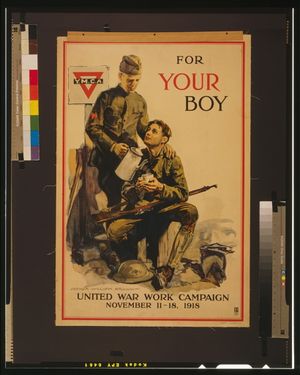 A YMCA poster created for the United War Work Campaign

In the 1890s, he attended the Hamilton Art School and studied under John Gordon. At the age of 16, he was hired as a chalk plate artist for the Hamilton Spectator. He later left Hamilton and attended the Art Students League in New York City, and studied under Walter Appleton Clark, F.W. DuMond, and F.R. Gruger. He was later hired as an illustrator by the Saturday Evening Post, where his works were featured prominently.[2]

In 1964, Brown earned the unofficial title of Dean of American Illustrators and was inducted into the Illustrator's Hall of Fame by the American Society of Illustrators.[1]