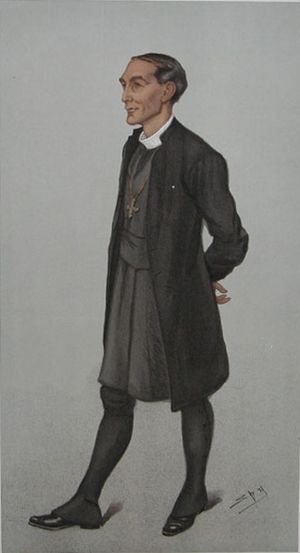 "London" – Winnington-Ingram as caricatured by Spy (Leslie Ward) in Vanity Fair, May 1901 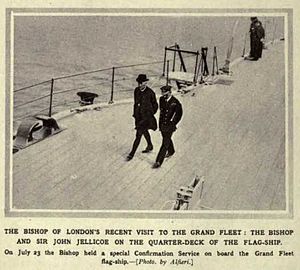 He was born in the rectory at Stanford-on-Teme, Worcestershire, the fourth son of Edward Winnington-Ingram (a Church of England priest and Rector of Stanford) and of Louisa (daughter of Henry Pepys, Bishop of Worcester).[4] Winnington-Ingram was educated at Marlborough College and Keble College, Oxford; he graduated with second-class honours in Literae Humaniores ('Greats') in 1881.[5] His younger brother Edward and his nephew (Edward's son) Arthur were both priests who became Archdeacons of Hereford.[6]

In 1897, Winnington-Ingram was raised to the episcopate as the second suffragan Bishop of Stepney.[9] In 1901, after the death of Mandell Creighton, he was nominated to the See of London,[10] and he was in the same year appointed as a Privy Counsellor.[11] As a preacher he proved very successful. He was a leader in social work in London's East End. As an administrator he has been judged inefficient in maintaining standards among the clergy in comparison with his disciplinarian-minded successor Geoffrey Fisher, a feature aggravated by his lengthy tenure.

During World War I Winnington-Ingram threw himself into supporting the war effort. He saw the war as a ‘great crusade to defend the weak against the strong’ and accepted uncritically stories of German atrocities. For a clergyman the language he used about the German people verged on xenophobia and H. H. Asquith, Prime Minister at the outbreak of the war, described his pitch as "jingoism of the shallowest kind." He spoke in aid of recruiting drives and later in the war urged his younger clergy to consider enlisting as combatants. Chaplain from 1901 to the London Rifle Brigade and London Royal Naval Volunteers, he visited the troops on both the Western Front and at Salonika and the Grand Fleet at Rosyth and Scapa Flow.[12]

For his war work he was Mentioned in Despatches and awarded the Grand Cross of the Order of the Redeemer (Greece) and the Order of St. Sava, 1st Class (Serbia).

On 22 May 1946, Winnington-Ingram was taken ill while playing golf and he died a few days later on 26 May 1946 in Upton-upon-Severn, Worcestershire.[13] His remains were buried at St Paul's Cathedral.[14] He never married, although while Bishop of Stepney he was briefly engaged[15] to Lady Ulrica Duncombe, a friend of Queen Alexandra and daughter of William Ernest Duncombe, 1st Earl of Feversham of Ryedale and Mabel Violet Graham.

He is commemorated in some of the street names in Hampstead Garden Suburb: The Bishops Avenue, Winnington Road and Ingram Avenue; and Bishop Winnington-Ingram Primary School, Ruislip.[18]

Unless otherwise indicated, all titles sourced from his sketch in Crockford's Clerical Directory 1938: