From Infogalactic: the planetary knowledge core
Jump to: navigation, search
This article is about the globe artichoke. For other uses, see Artichoke (disambiguation).

The globe artichoke (Cynara cardunculus var. scolymus)[1] is a variety of a species of thistle cultivated as a food.

The edible portion of the plant consists of the flower buds before the flowers come into bloom. The budding artichoke flower-head is a cluster of many budding small flowers (an inflorescence) together with many bracts, on an edible base. Once the buds bloom, the structure changes to a coarse, barely edible form. Another variety of the species is the cardoon, a perennial plant native to the Mediterranean region. Both wild forms and cultivated varieties (cultivars) exist.

This vegetable grows to 1.4–2 m (4.6–6.6 ft) tall, with arching, deeply lobed, silvery, glaucous-green leaves 50–82 cm (20–32 in) long. The flowers develop in a large head from an edible bud about 8–15 cm (3.1–5.9 in) diameter with numerous triangular scales; the individual florets are purple. The edible portions of the buds consist primarily of the fleshy lower portions of the involucral bracts and the base, known as the "heart"; the mass of immature florets in the center of the bud is called the "choke" or beard. These are inedible in older, larger flowers.

The total antioxidant capacity of artichoke flower heads is one of the highest reported for vegetables.[3] Cynarine is a chemical constituent in Cynara. The majority of the cynarine found in artichoke is located in the pulp of the leaves, though dried leaves and stems of artichoke also contain it. It inhibits taste receptors, making water (and other foods and drinks) seem sweet.[4]

Early history of use

The naturally occurring variant of the artichoke, the cardoon (Cynara cardunculus), which is native to the Mediterranean area,[1] has records of use as a food among the ancient Greeks and Romans. In North Africa, where it is still found in the wild state, the seeds of artichokes, probably cultivated, were found during the excavation of Roman-period Mons Claudianus in Egypt.[5] Varieties of artichokes were cultivated in Sicily beginning in the classical period of the ancient Greeks; the Greeks calling them kaktos. In that period, the Greeks ate the leaves and flower heads, which cultivation had already improved from the wild form. The Romans called the vegetable carduus (whence the name cardoon). Further improvement in the cultivated form appears to have taken place in the medieval period in Muslim Spain and the Maghreb, although the evidence is inferential only.[6] Names for the artichoke in many European languages today come from medieval Arabic أرضي شوكي Ardhi Shawki via late medieval Spain (where it is nowadays alcachofa).[7]

Le Roy Ladurie, in his book Les Paysans de Languedoc, has documented the spread of artichoke cultivation in Italy and southern France in the late 15th and early 16th centuries, when the artichoke appeared as a new arrival with a new name, which may be taken to indicate an arrival of an improved cultivated variety:

The blossom of the thistle, improved by the Arabs, passed from Naples to Florence in 1466, carried by Filippo Strozzi. Towards 1480 it is noticed in Venice, as a curiosity. But very soon veers towards the northwest...Artichoke beds are mentioned in Avignon by the notaries from 1532 onward; from the principle [sic] towns they spread into the hinterlands ... appearing as carchofas at Cavaillon in 1541, at Chateauneuf du Pape in 1553, at Orange in 1554. The local name remains carchofas, from the Italian carciofo ... They are very small, the size of a hen's egg ... and are still considered a luxury, a vaguely aphrodisiac tidbit that one preserved in sugar syrup.[8]

The Dutch introduced artichokes to England, where they grew in Henry VIII's garden at Newhall in 1530. They were brought to the United States in the 19th century, to Louisiana by French immigrants and to California by Spanish immigrants. 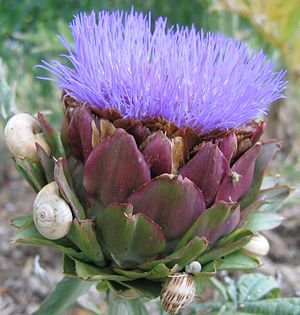 Artichoke head with flower in bloom

Today, globe artichoke cultivation is concentrated in the countries bordering the Mediterranean basin. The main European producers are Italy, Spain, and France. In the United States, California provides nearly 100% of the U.S. crop, and about 80% of that is grown in Monterey County; there, Castroville proclaims itself to be "The Artichoke Center of the World", and holds the annual Castroville Artichoke Festival. Most recently, artichokes have been grown in South Africa in a small town called Parys located along the Vaal River.

Artichokes can be produced from seeds or from vegetative means such as division, root cuttings, or micropropagation. Though technically perennials that normally produce the edible flower during only the second and subsequent years, certain varieties of artichokes can be grown from seed as annuals, producing a limited harvest at the end of the first growing season, even in regions where the plants are not normally winter-hardy. This means home gardeners in northern regions can attempt to produce a crop without the need to overwinter plants with special treatment or protection. The recently introduced seed cultivar 'Imperial Star' has been bred to produce in the first year without such measures. An even newer cultivar, 'Northern Star', is said to be able to overwinter in more northerly climates, and readily survives subzero temperatures.[10]

Commercial culture is limited to warm areas in USDA hardiness zone 7 and above. It requires good soil, regular watering and feeding, and frost protection in winter. Rooted suckers can be planted each year, so mature specimens can be disposed of after a few years, as each individual plant lives only a few years. The peak season for artichoke harvesting is the spring, but they can continue to be harvested throughout the summer, with another peak period in midautumn.

When harvested, they are cut from the plant so as to leave an inch or two of stem. Artichokes possess good keeping qualities, frequently remaining quite fresh for two weeks or longer under average retail conditions.

Apart from food use, the globe artichoke is also an attractive plant for its bright floral display, sometimes grown in herbaceous borders for its bold foliage and large, purple flower heads. 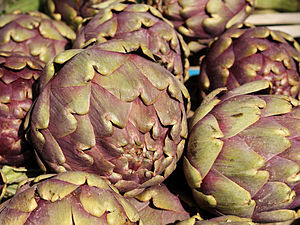 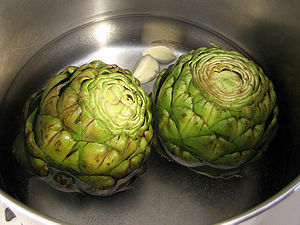 In the US, large globe artichokes are frequently prepared by removing all but 5–10 mm (0.2–0.4 in) or so of the stem. To remove thorns, which may interfere with eating, around a quarter of each scale can be cut off. To cook, the artichoke is boiled or steamed. A cooked, unseasoned artichoke has a delicate flavour, reminiscent of fried eggwhite. The core of the stem tastes similar to the artichoke heart, and is edible.

Salt may be added to the water if boiling artichokes. Leaving the pot uncovered may allow acids to boil off. Covered artichokes, in particular those that have been cut, can turn brown due to the enzymatic browning and chlorophyll oxidation. Placing them in water slightly acidified with vinegar or lemon juice can prevent the discoloration.

Leaves are often removed one at a time, and the fleshy base eaten, with hollandaise, vinegar, butter, mayonnaise, aioli, lemon juice, or other sauces. The fibrous upper part of each leaf is usually discarded. The heart is eaten when the inedible choke has been peeled away from the base and discarded. The thin leaves covering the choke are also edible. 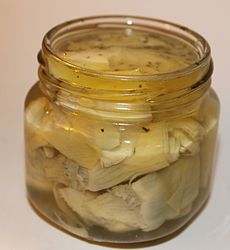 In Italy, artichoke hearts in oil are the usual vegetable for "spring" section of the "Four Seasons" pizza (with olives for summer, mushrooms for autumn, and prosciutto for winter).[12] A recipe well known in Rome is Jewish-style artichokes, which are deep-fried whole.[13]

Stuffed artichoke recipes are abundant. A common Italian stuffing uses a mixture of bread crumbs, garlic, oregano, parsley, grated cheese, and prosciutto or sausage. A bit of the mixture is then pushed into the spaces at the base of each leaf and into the center before boiling or steaming.[14] A similar recipe is popular in coastal Croatia.[citation needed]

In Spain, the more tender, younger, and smaller artichokes are used. They can be sprinkled with olive oil and left in hot ashes in a barbecue, sauteed in olive oil with garlic, with rice as a paella, or sautéed and combined with eggs in a tortilla (frittata).

Often cited is the Greek, aginares a la polita (artichokes city-style, referring to the city of Constantinople), a hearty, savory stew made with artichoke hearts, potatoes, and carrots, and flavored with onion, lemon, and dill.[15][16] The finest examples are to be found on the island of Tinos, and in Iria and Kantia, two small villages in Argolida in the Peloponnese of southern Greece.[citation needed]

Another way to use artichokes is to completely break off all of the leaves, leaving the bare heart. The leaves are steamed to soften the fleshy base part of each leaf to be used as the basis for any number of side dishes or appetizing dips, or the fleshy part is left attached to the heart, while the upper parts of the leaves are discarded. The remaining concave-shaped heart is often filled with meat, then fried or baked in a savory sauce. Frozen artichoke hearts are a time-saving substitute, though the consistency and stronger flavor of fresh hearts when available is preferred. 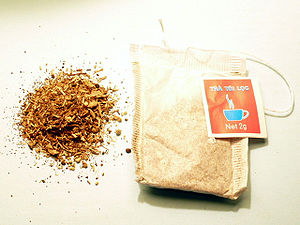 Artichokes can also be made into an herbal tea. "Artichoke tea" is produced as a commercial product in the Da Lat region of Vietnam. The flower portion is put into water and consumed as an herbal tea, called alcachofa in Mexico. It has a slightly bitter woody taste.

Artichoke is the primary flavor of the 33-proof (16.5%-alcohol) Italian liqueur Cynar produced exclusively by the Campari Group. It can be served over ice as an aperitif or as a cocktail mixed with orange juice, especially popular in Switzerland. It is also used to make a 'Cin Cyn', a slightly less-bitter version of the Negroni cocktail, by substituting Cynar in place of Campari.

Artichoke leaf extract has been investigated for its potential to lower cholesterol levels for people with hypercholesterolaemia, but no convincing medical evidence indicates it is effective.[18]