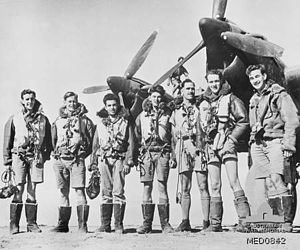 A No. 462 Squadron bomber crew in September 1942. While this was an Australian squadron, only the man third from the right is Australian; the others are from Britain, Newfoundland and New Zealand

These units complemented another feature of the BCATP, under which personnel from the Royal Air Force (RAF), Royal Australian Air Force (RAAF), Royal Canadian Air Force (RCAF) and Royal New Zealand Air Force (RNZAF) were placed in a common pool, and assigned to Article XV and RAF squadrons – in Europe, the Mediterranean Theatre, Africa and South-East Asia – according to operational needs.

Negotiations regarding the BCATP, between the four governments concerned, took place in Ottawa, Canada during late 1939. The Air Training Agreement (sometimes known as the "Ottawa Agreement" or the "Riverdale Agreement", after the UK representative at the negotiations, Lord Riverdale) was officially signed on 17 December 1939.

Under Article XV of the Agreement, graduates from Dominion air forces were to be assigned to squadrons either formed by their own air forces, or with a specific national designation, under the operational control of a local air force, in most cases the RAF.[1][2][3] These became known as "Article XV squadrons." In addition, Articles XVI and XVII stipulated that the UK government would be responsible for the pay and entitlements of aircrews trained under the BCATP. Nevertheless, these personnel and any squadrons formed for service with the RAF, under Article XV, would belong to the three Dominion air forces. This was largely an initiative of the Canadian Prime Minister, Mackenzie King, during the negotiations with Riverdale.[4]

During the war, 44 Canadian, 17 Australian and six New Zealand Article XV squadrons were formed. In practice – and technically in contravention of Article XV – most personnel from Dominion air forces, while they were under RAF operational control, were assigned to British units.[3] This was generally due to practical staffing considerations. Similarly, many of the Article XV squadrons contained few airmen from their nominal air force when they were first formed. However, by the end of the war this had generally been rectified.[5] Canada made a greater insistence on its airmen going specifically to RCAF operational units overseas, ensuring that the identity of its national squadrons was preserved. In January 1943 Canada was also able to form their bomber squadrons into a separate wholly RCAF formation within Bomber Command (No. 6 Group), commanded by a Canadian air vice-marshal. This was something the Australians and New Zealanders did not achieve.[3]

Several other RAAF and RCAF units, which were not covered by Article XV, were also under RAF operational control (see below). Initially, there was no cross-posting of personnel to or from these squadrons by the RAF and other Dominion air forces, although this requirement was relaxed later in the war.

The remaining dominion, South Africa, was not a signatory to the BCATP and the South African Air Force (SAAF) did not form any Article XV squadrons. However, South Africa provided training facilities for some Article XV personnel, and many SAAF units took part in the East African, North African and Italian Campaigns. Furthermore, as the war progressed, personnel from other Dominion air forces were transferred to SAAF units and vice versa, in North Africa, the Mediterranean and Italy.

No. 75 (New Zealand) Squadron RAF had a status similar to the Rhodesian squadrons, and was not officially an Article XV squadron, although it was staffed primarily by RNZAF aircrew during the war and was officially transferred to the RNZAF in late 1945. 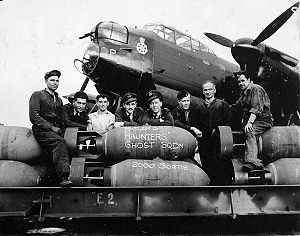 Aircrew and groundcrew of a No. 428 Squadron RCAF Lancaster bomber

A further four squadrons served outside North America during the war: No. 162 Squadron RCAF, which in 1944 was transferred from RCAF Eastern Air Command to RAF Coastal Command, from airfields in Iceland and Scotland and; three Air Observation Post (AOP; artillery spotter) squadrons, composed of RCAF and Royal Canadian Artillery personnel: No. 664 Squadron RCAF; No. 665 Squadron RCAF and; No. 666 Squadron RCAF.

Some non-Article XV RCAF squadrons were re-numbered to become Article XV squadrons when they were transferred from North America to Europe. These were:

However, most of the RCAF Article XV squadrons were formed overseas. Domestically the Home War Establishment of the RCAF, which consisted of Eastern and Western Air Commands, had at its peak 37 squadrons.

Following the end of the war and termination of the BCATP, the RCAF squadrons covered by Article XV retained their numbers. Furthermore, home-based, non-Article XV squadrons were renumbered in the 400-series. During an expansion of the RCAF in the early 1950s the numbers 444 to 449 were used,[citation needed] and – following the 1968 unification of the three service branches – a Canadian Army helicopter squadron became known as 450 Squadron (a name that overlapped the RAAF numbers).[6]

Members of No. 460 Squadron posing with the Lancaster bomber G for George at RAF Binbrook in August 1943

Australia formed 17 Article XV squadrons, out of a total of 79 RAAF squadrons, during World War II. While 18 squadrons had been originally planned for service with the RAF, No. 465 Squadron was never formed.[1][7]

The remaining 57 RAAF squadrons served under the operational control of the RAAF or United States Army Air Forces, in the South West Pacific Theatre during World War II.

When some Article XV squadrons and RAF units were transferred to RAAF operational control, from 1943 onwards, they retained their original numbers.

All the Australian Article XV squadrons were disbanded after the end of the war. Since 2005 four of the squadrons have been re-formed by re-designating RAAF intelligence and air traffic control units.

The RAAF Article XV squadrons were:

Five other RAAF squadrons were also under RAF operational control for the whole or part of the war:

On 17 April 1941, a secondary agreement was signed by the British and New Zealand governments, to form a total of six Article XV squadrons for service with the RAF, from RNZAF personnel.

No. 75 (New Zealand) Squadron RAF, a heavy bomber unit, was not officially an Article XV squadron although it was composed mainly of RNZAF aircrew and the entire unit was transferred from the RAF to the RNZAF following the end of World War II. 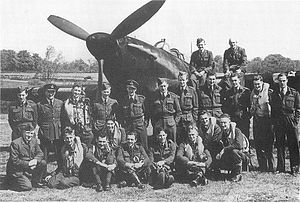 Hurricane night fighter pilots from No. 486 Squadron at RAF Wittering in 1942