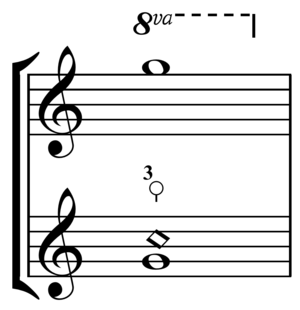 Artificial harmonic, as written (below) and as sounding (top). The round note (below) is pressed with one finger, and the square note is lightly touched with another one.

To produce an artificial harmonic, a stringed instrument player holds down a note on the neck with one finger of the non-dominant hand (thereby shortening the vibrational length of the string) and uses another finger to lightly touch a point on the string that is an integer divisor of its vibrational length, and plucks or bows the side of the string that is closer to the bridge. This technique is used to produce harmonic tones that are otherwise inaccessible on the instrument. To guitar players, one variety of this technique is known as a pinch harmonic.

This technique, like natural harmonics, works by canceling out the fundamental tone and one or more partial tones by deadening their modes of vibration. See node. 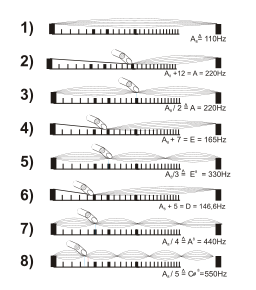 Playing a natural harmonic on a string.
File:Table of Harmonics.svg
Table of harmonics of a stringed instrument with colored dots indicating which positions can be lightly fingered to generate just intervals up to the 7th harmonic.
Main article: Overtone

When a string is plucked or bowed, the string vibrates at several frequencies. The vibration along the entire length of the string is known as the fundamental, while vibrations occurring between points along the string (known as nodes) are referred to as overtones. The fundamental and overtones, when sounded together, are perceived by the listener as a single tone, though the relative prominence of the frequencies varies among instruments, and contribute to its timbre.

Harmonics are produced on the instrument by lightly touching a string (as opposed to fretting it) at any of several points along its length. The fundamental tone will not vibrate; specific overtones, however, will, resulting in a chimelike tone. Harmonics produced by this method based on open-string fundamentals are termed "natural." If the string is fretted, the harmonics are termed "artificial." Natural harmonics may only be sounded at the strings' nodes. The nodes for natural harmonics fall at the following points along the guitar's neck: