Artists of the Tudor court 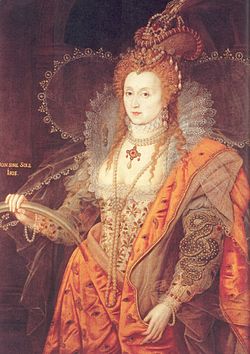 The Rainbow Portrait, an image of Elizabeth I as the "Queen of Love and Beauty" by Isaac Oliver c. 1600, epitomizes the elaborate iconography associated with later Tudor court portraiture[1]

The artists of the Tudor court are the painters and limners engaged by the monarchs of England's Tudor dynasty and their courtiers between 1485 and 1603, from the reign of Henry VII to the death of Elizabeth I.

Typically managing a group of assistants and apprentices in a workshop or studio, many of these artists produced works across several disciplines, including portrait miniatures, large-scale panel portraits on wood, illuminated manuscripts, heraldric emblems, and elaborate decorative schemes for masques, tournaments, and other events. 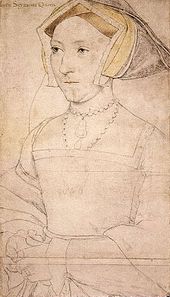 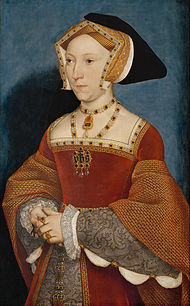 The Tudor period was one of unusual isolation from European trends for England. At the start the Wars of the Roses had greatly disrupted artistic activity, which apart from architecture had reached a very low ebb by 1485. The Yorkist dynasty overthrown by the Tudors had been very close to their Burgundian allies, and English diplomats had their portraits painted by the finest Early Netherlandish painters - Edward Grimshaw by Petrus Christus and Sir John Donne by Hans Memling (both National Gallery, London[2]). However these were both painted abroad. In the Tudor period foreign artists were recruited and often welcomed lavishly by the English court, as they were in other artistically marginal parts of Europe like Spain or Naples.[3] The Netherlandish painters remained predominant, though French influence was also important on both Lucas Horenbout and Nicholas Hilliard, respectively the founder and the greatest exponent of the distinctively English tradition of the portrait miniature.

With the virtual extinction of religious painting at the Reformation, and little interest in classical mythology until the very end of the period, the portrait was the most important form of painting for all the artists of the Tudor court, and the only one to have survived in any numbers. How many of these have been also lost can be seen from Holbein's book (nearly all pages in the Royal Collection) containing preparatory drawings for portraits - of eighty-five drawings, only a handful have surviving Holbein paintings, though often copies have survived.[4] Portraiture ranged from the informal miniature, almost invariably painted from life in the course of a few days and intended for private contemplation,[5] to the later large-scale portraits of Elizabeth I such as the Rainbow Portrait, filled with symbolic iconography in dress, jewels, background, and inscription.[6]

Much energy was also expended on decorative painting of fixtures and fittings, often of a very temporary nature. In theory the "Serjeant Painters" of the King, a lower rank of painter, did most of this, probably to the designs of the more elevated "King's Painters" (or Queen's), but it is clear that they too spent time on this, as did court artists all over Europe (see Royal Entry). There was also the Master of the Revels, whose Office was responsible for festivals and tournaments, and no doubt called upon the artists and Serjeant Painters for assistance.

Jewellery and metalwork were regarded as extremely important, and far more was spent on them than on painting. Holbein produced many spectacular designs for now-vanished table ornaments in precious metals, and Hilliard was also a practising goldsmith. The main artistic interests of Henry VIII were music, building palaces and tapestry, of which he had over 2,000 pieces, costing far more than he ever spent on painters. The Flemish set with the Story of Abraham still at Hampton Court Palace is one grand set from late in his reign.

Detail of Georg Hoefnagel's 1568 watercolour of the south frontage of Nonsuch Palace, one of the only two good images - which differ considerably. The stucco reliefs are shown in blue-ish grey.

Elizabeth spent far less, hardly building anything herself, but took a personal interest in painting, keeping her own collection of miniatures locked away, wrapped in paper on which she wrote the names of the sitter. She is reputed to have had paintings of her burnt that did not match the iconic image she wished to be shown.

The most progressive and spectacular palace of the Tudor period, Nonsuch Palace, begun by Henry VIII in 1538 a little way south of London, was covered inside and out with prodigous quantities of figurative sculpted stucco reliefs - the whole scheme covered over 2,000 square metres (21,000 sq ft).[7] There was also probably much decorative painting. As for the similar work at the Château de Fontainebleau, which Nonsuch was certainly intended to compete with, and outshine, Italians were brought in to provide authentic Mannerist work, however much the general plan remains English. The scattered fragments and images that have survived suggest that the awestruck accounts of visitors were not exaggerated.[8]

A community of artists

Many of the artists active at the Tudor court were connected by ties of family, marriage, and training. Lucas Horenbout (often called Hornebolt in England), who began painting and illuminating for Henry VIII in the mid-1520s, was accompanied in his workshop by his sister Susannah, who was also an illuminator. It is generally accepted[10] that Lucas Horenbout taught Hans Holbein the Younger the techniques of painting miniatures on vellum when Holbein was engaged by Henry VIII in the early 1530s.

Lucas and Susanna Horenbout's father, Gerard Horenbout - possibly he was the Master of James IV of Scotland - was an active member of the Ghent-Bruges school of manuscript illustrators and also was employed briefly at the Tudor court.[11] In Bruges, Gerard was associated with Sanders Bening or Benninck and his son Simon, with whom he worked on the illustrations for the Grimani Breviary. Simon Bening's eldest daughter Levina Teerlinc was also trained as an illuminator. She entered the service of Henry VIII at the close of 1546 following the deaths of Holbein (1543) and Lucas Horenbout (1544), and would remain as court painter to Henry's son Edward VI[12] and as painter and lady-in-waiting to both his daughters, Mary I and Elizabeth. Levina Teerlinc, in turn, taught the art of limning to Nicholas Hilliard, an apprentice goldsmith who would marry the daughter of Queen Elizabeth's jeweler and rise to become the supreme miniaturist of the age. John Bettes the Elder apprenticed his son, John the Younger to Hilliard. Hilliard's most famous student, Isaac Oliver, later limner to Anne of Denmark and Henry, Prince of Wales, was married to the niece of Marcus Gheeraerts the Younger.[13] Gheeraerts was also the brother-in-law of Lucas de Heere's apprentice John de Critz the Elder,[13] who took the dynasty into the Stuart period, and was succeeded as Serjeant-Painter by his son. De Heere was also a religious refugee from Flanders; although the upheavals of the Protestant Reformation acted to reduce artistic contacts, especially with Italy, England could also benefit from them. 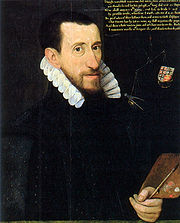 George Gower's 1579 self-portrait shows his tools as an artist outweighing his arms as a gentleman; he was the first serjeant painter who was also a portraitist[17][18]

The holders of the office were:[19] 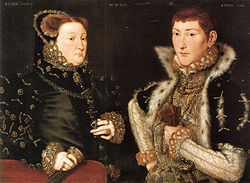 This portrait was misidentified for 250 years.

Many surviving images have been badly worn over the years, or incompetently "restored". Inscriptions are often later than the paintings themselves, and may reflect wishful thinking; many anonymous Tudor ladies were identified as "Mary I", or, especially, one or other of Henry VIII's queens, by the owners of pictures. Anne Boleyn in particular has been said to be the subject of dozens of pictures; even now there is no certain image of her done from life, and the most plausible,[22] is a later copy and among the least informative. The only probable portrait of Catherine Howard, a miniature by Holbein in the Royal Collection, is only identified by circumstantial evidence (see Gallery).[23]

A well-known painting (left) was identified by George Vertue in 1727 as Lady Frances Brandon and her second husband Adrian Stokes, an attribution that stood unquestioned until the sitters were properly identified as Mary Nevill, Baroness Dacre and her son Gregory Fiennes, 10th Baron Dacre and the artist as Hans Eworth in 1986.[24]

Attribution to artists is even more challenging; not all artists signed their work, and those who did may not have done so consistently. Many pictures have been cut down, extended, or otherwise altered in ways that damage or destroy inscriptions. Artists' workshops often churned out copies of the master's work to meet the demand for portraits, as symbols of devotion to the Crown or simply to populate the fashionable "long galleries" lined with portraits.

Today, attributions are made on the basis of style, sitter, accepted date, and related documentation such as receipts or bills for payment and inventories of collections or estates. It is now generally accepted that the artist known as "The Monogrammist HE" is Hans Eworth,[25] but other identifications remain elusive. Some of the most well-known images of the period, such as the portrait of Elizabeth I when a Princess, age 13, have been attributed to many artists over the years, but remain cautiously labelled "?Flemish School" in recent catalogues.[26] Much scholarly debate also circles around identification of possible portraits of Lady Jane Grey.[27]

The royal accounts for the period survive, but are not always easy to interpret. Payments often covered expensive materials, and in many cases the wages of assistants had to be paid out of them. Some regular annuities, usually supplemented by payments for specific works, are given below. But recipients were expected to give works to the monarch, at New Year or on their birthday.

The sums spent on metalwork, building palaces, and by Henry on tapestries, dwarfed these figures.