From Infogalactic: the planetary knowledge core
Jump to: navigation, search
For other uses of "Artsruni", see Artsruni (disambiguation).

Artsruni (Armenian: Արծրունի; also transliterated as Ardzruni) was an ancient Armenian noble family that claimed descent from Sennacherib, King of Assyria (705 BC–681 BC). Although it mirrors the Bagratuni claim of Davidic descent and the Mamikonian claim of descent from the royal Han Dynasty, it is usually interpreted as a piece of genealogical mythology. The origin of this claim is attributed to Moses of Chorene according to whom Sennacherib's sons fled to Armenia after murdering him and founded the clans of the Artsruni and Gnuni. Chorene in turn was in all likelihood inspired by Biblical tradition: 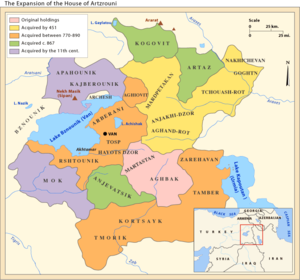 The Expansion of the House of Artsruni

Genealogist and historian Cyril Toumanoff favored an Orontid origin of the Artsruni family.[2] Professor James Russell proposed the idea that the Artsrunis derived their name from the Urartian word artsibini (eagle) which survived in Armenian as artsiv (արծիվ). The eagle was a totemic animal for the Artsrunis and in a legend the progenitor of the Artsrunis is said to have been abandoned as a child but rescued by an eagle.[3]

The first attested member of the family is thought to be Mithrobarzanes in 69 B.C, the viceroy of Tigranes the Great in Sophene.[2] During the reign of the Arshakuni, the family ruled the princely estates of Greater and Lesser Aghbak in Vaspurakan, southeast of Lake Van, gradually annexing the surrounding territory.

In the middle of the 4th century the family was deposed. Chavash survived, and recovered power. In 369 the state was led by Merujan Artsruni who guided Persian troops to Armenia and defeated the General (sparapet) Mamikonian. The latter recovered power soon after, however, and Merujan was killed.

Around 772 the Artsruni presided over the families of Amatuni, Rshtuni, Teruni of Dariunq (before a possession of the Bagratuni) and ruled the regions of Maku, Artaz, Great Zab Valley and Van river. In 908 they forged the principality of Vaspurakan.

Gagik I of Vaspurakan claimed the title of "King of Armenia" from the Bagratuni Dynasty until his death in 936 or 943.

In the beginning of the 11th century, the Artsruni settled westwards in Cappadocia, retreating from eastern invaders. In 1021, Seneqerim-Hovhannes of Vaspurakan was given Sebaste, Evdokia, and possibly Amasia as fiefdom from the Byzantine emperor Basil II in return for his entire kingdom.[4] He and 14,000 of his retainers settled in the Theme of Sebasteia, while the Kingdom of Vaspurakan became the Byzantine theme of Vasprakania, which lasted for fifty years until 1071.[5]

Umberto Eco introduced the character of Ardsruni, a nobleman and alchemist in Cilicia, in his fantastic novel Baudolino.