He was son of Pedro Alessandri Vargas, son of an Italian immigrant, and Susana Palma Guzmán. His father was dedicated to the agricultural labor of the estate in which he lived. At the age of 12 he entered the Sacred Hearts High School, run by French priests, where his brothers were studying and his father had studied.

He started his law career by beginning studies at the University of Chile[1] at the age of 20, graduating in 1893. In 1891, while studying, he participated in the newspaper "La Justicia", which was in opposition to the President of the time, José Manuel Balmaceda. After graduating as a lawyer, he married Rosa Ester Rodríguez Velasco, with whom he had 9 children.

He began his political life in 1897, entering the Liberal Party, and assuming the position of representative of Curicó, where he would be re-elected for almost 20 years. In 1915, already showing his first presidential aspirations, he challenged the senator of the province of Tarapacá, Arturo del Río. Alessandri won a disputed and violent election, from where he earned the nickname of León de Tarapacá (Lion of Tarapacá), due to his charisma, his popularity with the people and his public-speaking abilities.

In 1920 he ran for President of the Republic for the Liberal Alliance , defeating by a narrow margin his opponent of the Coalition (now named the National Union since it incorporated the Conservative Party) Luis Barros Borgoño. With his speeches favoring the working class, he caused great fear in the more conservative sectors of Chilean society, which saw its interests in jeopardy. Since the opposition controlled the National Congress, Alessandri favored strengthening the executive power, which lacked political weight before the Congress (Parliamentary Era).

During most of 1924, Chile had been politically paralyzed by a conflict between the President and the conservatively controlled Congress, who refused to enact the laws that he submitted. On September 3, 1924 a group of 56 military officers protested for their low salaries, in the incident known as the saber-rattling (ruido de sables). The next day the same group of young military officers led by Colonel Marmaduque Grove and Major Carlos Ibáñez del Campo, created the "military committee" to defend themselves from the government. On September 5, the "military committee" demanded of President Alessandri the dismissal of three of his ministers, including the Minister of War; the enactment of a labor code, the passage of an income tax law, and the improvement of the military salaries. Alessandri had no option but to appoint General Luis Altamirano, the Army Inspector General, as head of a new cabinet. On September 8, General Altamirano appeared in front of Congress to demand the passage of eight laws, including Alessandri's labor code. Congress didn't dare to protest, and the laws were passed in a matter of hours.

At that point, Alessandri felt that he had become just a pawn of the military and on September 9, he resigned, and requested asylum at the US Embassy. Congress refused to accept his resignation, and instead granted him a six-month constitutional leave of absence. He left the country immediately for Italy. On September 11, a military Junta — the September Junta — was established to rule the country in his absence. 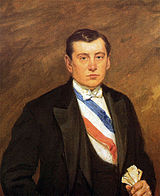 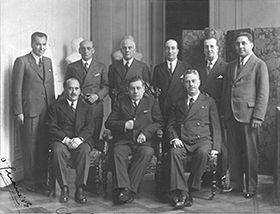 Arturo Alessandri (sitting in center) together with his Ministers of State, in April 1934. 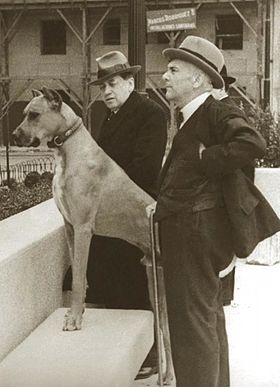 The September Junta was not homogeneous, and quickly a progressive wing, headed by Marmaduke Grove and Carlos Ibáñez del Campo, developed contacts with the Comité Obrero Nacional and others labour organizations who advocated for Alessandri's return. This led to a coup in January 1925, directed by Colonel Grove who handed out the power to General Pedro Dartnell as interim president while waiting for Alessandri's return. Dartnell formed the January Junta, before retroceding the power to Alessandri on March 20, 1925. Alessandri had a new Constitution drafted, and approved by plebiscite by 134,421 voters on August 30. The Constitution, which was promulgated on September 18, 1925, reinforced presidential powers over the legislative. Furthermore, Alessandri created a Central Bank, initiating the first rupture with laissez faire policies[2]

His second government began with the support of left-wing and radical groups. However, this second group began to distance itself from the President. In March 1925, Alessandri's government repressed a demonstration, leading to the Marusia massacre, soon followed by La Coruña massacre. This break with the working classes caused him to try to maintain a right-wing-radical alliance until 1937, when it took a turn towards the left. In order to face the threats of a coup, Alessandri relied on the republican forces, entrusted with repressing any intent to revolt and never to get involved in politics. They were created shortly before Alessandri's return, as a consequence of the civil movement. They functioned in secret and then publicly, marching in a great parade May 7, 1933 in front of the President, who saluted them. They auto-disbanded in 1936, having considered their mission complete. The President asked the Parliament on several opportunities for the state of constitutional exception, resulting in illegal actions, such as the famous burning of the Topaze Magazine issue No. 285, which depicted a caricature of Alessandri he considered offensive.

That time was also marked by the appearance of new violent occurrences, such as the rural rebellion of Ránquil and their bloody repression, and the Nazi-inspired National Socialist Movement of Chile of Jorge González von Marées. In the economic sphere, the recovery of the crisis of 1929 was begun with the work of the Treasury Minister Gustavo Ross, a pragmatic liberal who implemented a "towards in" approach to growth. With respect to nitrates, he dissolved COSACH and created the COVENSA (Corporation of Nitrate and Iodine Sale), a multi-faceted distributor and not a producer. He balanced the fiscal deficit with new taxes and resumed payment of the external debt, with losses for holders of Chilean bonds. When they reached a surplus, they focused on public works. The construction of the National Stadium in Santiago, inaugurated in December 1938, stands out.

His role in the 1938 Seguro Obrero massacre has always been subject of controversy. Two facts favor the evidence of his responsibility: first, the Chilean armes forces are (or were) known for their high degree of discipline and would never have carried out such act of violence "without orders from above." Second, the massacre took place in a building merely 30 meters away from the presidential palace. The proximity of the massacre to his office and the discipline of the troops strongly suggest that this event was sanctioned from the highest office in the land.

Public life after the presidency

His political life did not end with his presidency. Due to the death of the communist Senator of Curico, Talca, Linares and Maule, Amador Pairoa, he participated in a complementary Senatorial election and won, returning to the Senate on November 8. In 1949 he was reelected but this time for Santiago, while also chosen to be President of this body.

He was of vital importance in the presidential elections of 1942 and 1946, in the first by causing a division of votes of the liberals, supporting Juan Antonio Ríos, and in the second by presenting himself as a preliminary candidate of the liberals. He later yielded his candidacy to his son Fernando, resulting in the division of the presidential candidates of the right and conservative support for Dr. Eduardo Cruz-Coke, in turn favoring the victory of Gabriel González Videla. While President of the Senate of Chile, Alessandri died at the age of 82, on August 24, 1950, and was replaced by his son Fernando Alessandri. One of his other sons, Jorge Alessandri, was president of Chile from 1958 to 1964.