Arvydas Romas Sabonis (born December 19, 1964) is a Lithuanian retired professional basketball player and businessman. Recognized as one of the best European players of his era, he won the Euroscar Award six times, and the Mr. Europa Award twice. He played in a variety of leagues, and spent seven seasons in the National Basketball Association (NBA) in the United States. Sabonis played the center position and also won a gold medal at the 1988 Summer Olympics in South Korea for the Soviet Union, and later earned bronze medals at the 1992 and 1996 games while playing for Lithuania. He retired from professional basketball in 2005.

Sabonis is considered one of the best big man passers as well as one of the best overall centers in the history of the game. Bill Walton once called Sabonis a 7'3" Larry Bird due to his unique court vision, shooting range, rugged in-game mentality, and versatility.[1]

On August 20, 2010, Sabonis was inducted into the FIBA Hall of Fame in recognition of his great play in international competition.[2] On April 4, 2011, Sabonis was named to the Naismith Memorial Basketball Hall of Fame,[3] and he was inducted on August 12, 2011. At that time, he was the tallest player to ever enter the Naismith Memorial Basketball Hall of Fame; one year later, he would be surpassed by 7'4" Ralph Sampson. On October 24, 2011, Sabonis was voted to be the next president of the Lithuanian Basketball Federation, replacing Vladas Garastas who was the leader of LBF since 1991. He resigned from the position on October 2, 2013, but came back on October 10, 2013.

Born in Kaunas, Lithuanian SSR, Soviet Union (now Kaunas, Lithuania), Sabonis began playing basketball at age 13. By the time he was 15 years old he was a member of the Soviet national junior team.[4]

Sabonis made his professional debut in 1981 with one of the oldest basketball teams in Lithuania, BC Žalgiris, in his hometown of Kaunas. He won three consecutive Soviet League titles and reached the 1986 Euroleague finals with the team.

Sabonis was not allowed to play in the NBA by Soviet authorities until 1989. However, he did go to Portland to rehabilitate his injury with Blazers trainers. He also practiced with the team.

In the 1988 Summer Olympics, Sabonis led the Soviet Union to a gold medal with a win against a United States team that featured future NBA All-Stars David Robinson, Mitch Richmond and Danny Manning[4] in the semi-finals. The team later beat Yugoslavia in the finals.[4] 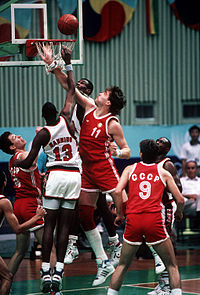 Sabonis, a member of the Soviet Union national team, taking on David Robinson and Danny Manning during the semifinal clash with Team USA at the 1988 Olympics. The Soviets scored a famous 82-76 victory with Sabonis contributing 13 points and 13 rebounds.

The 1985–1988 stretch of a heavy playing schedule and lack of rest took a significant toll on Sabonis' future health and durability. Various leg injuries weren't given much time to heal due to the Cold War climate that surrounded international competition as well as BC Žalgiris – CSKA Moscow games. In a 2011 interview, Sabonis expressed an opinion that overuse by the coaches of the Soviet national program was a major contributing factor to his first Achilles' tendon injury back in 1986.[5] Another key moment for his future health took place in 1988 when Sabonis had a surgical Achilles procedure performed in Portland but was rushed back on the floor with the USSR Olympic team before a full recovery. The decision to include a limping Sabonis on the USSR roster for the 1988 Olympic games was protested at the time by Portland medical staff and was later heavily criticized.[6] Eventually Sabonis would develop chronic knee, ankle and groin issues that substantially limited his mobility and explosiveness by the mid-1990s.

In 1992, after playing with CB Valladolid for three seasons, Sabonis joined Real Madrid and won two Spanish League titles and a Euroleague title in 1995. During the 1994–95 regular season with Real Madrid, he averaged 22.8 points, 13.2 rebounds, 2.6 blocked shots, and 2.4 assists per game.[4]

After the 1994–95 European season, Sabonis and Portland contacted one another about a move to the NBA. Before signing Sabonis, Portland's then-general manager Bob Whitsitt asked the Blazers team physician to look at Sabonis' X-rays. Illustrating the impact of Sabonis' numerous injuries, Whitsitt recalled in a 2011 interview that when the doctor reported the results, "He said that Arvydas could qualify for a handicapped parking spot based on the X-ray alone."[7] Nevertheless, the Blazers signed Sabonis. He had a successful rookie campaign, averaging 14.5 points on 55% shooting and 8.1 rebounds while playing less than 24 minutes per game.[4] Sabonis was selected to the All-Rookie First Team and was runner-up in both Rookie of the Year and Sixth Man of the Year votings.[4] His postseason averages were up to 23.6 points and 10.2 rebounds.[4] In the first playoff series of his NBA career, Portland lost to Utah in five games.

During Sabonis' first leg in Portland the Blazers always made the playoffs (part of a 21-year streak); between 1998 and 1999 the Oregon franchise changed large parts of its roster in order to compete for the title (after six consecutive first round losses), with center Sabonis the only player remaining in the starting five. Kenny Anderson and Isaiah Rider were traded for Damon Stoudamire and Steve Smith. In both those years the Blazers reached the Western Conference Finals; in 1999 they were swept by the eventual champions, the San Antonio Spurs, while the next year the team (starting Sabonis, Smith, Stoudamire, Rasheed Wallace and recently added Scottie Pippen) lost to the Los Angeles Lakers (at the beginning of the Shaq-Kobe three-peat) in 7 games.

He won the Euroscar Award twice while playing with the Blazers. He also became a fan favorite.[8]

The question that surrounds Sabonis' NBA career revolves around how good he could have been had he played in the NBA during his prime.[9][10] Sabonis was nearly 31 when he joined the Blazers, by which time he had already won multiple gold medals, suffered through numerous injuries and had lost much of his mobility and athleticism. In Bill Simmons' "Book of Basketball", Arvydas Sabonis the international player is idealized while Arvydas Sabonis the Blazer is described as "lumbering up and down the court in what looked to be concrete Nikes" and ranking "just behind Artis Gilmore on the Moving Like a Mummy Scale."[11] In ESPN's David Thorpe's view, Sabonis would be the best passing big in NBA history and possibly top 4 center overall, had he played his entire career there.[12] In Clyde Drexler's view, if Sabonis had been able to spend his prime in Portland next to the plethora of other Trail Blazers' All Stars (Drexler, Terry Porter, Buck Williams and "Cliff" Robinson), Trail Blazers would "have had four, five or six titles. Guaranteed. He was that good. He could pass, shoot three pointers, had a great post game, and dominated the paint."[13]

After the 2000–2001 NBA season, Sabonis refused to sign an extension with Trail Blazers and retired from the NBA. In his own words, he "was tired mentally and physically." Instead, he returned to Europe where he signed a one-year deal at nominal salary with Žalgiris, expecting to join the team for most important games down the stretch. However, he ended up missing that season in its entirety resting and recovering from injuries. Sabonis rejoined Trail Blazers for one final season in 2002–2003.[14]

Sabonis came back to Žalgiris to play his final season in 2003–2004. He led the team to the Top 16 stage of the Euroleague that year and was named the Regular Season MVP and the Top 16 MVP. He also became the team's president.[15] Sabonis would officially retire in 2005.

Sabonis was awarded a silver medal at the 2013 EuroBasket tournament as the LKF president.[16]

Sabonis is married to Ingrida Mikelionytė, the first Miss Lithuania, fashion model, and movie actress.[4] They have a daughter named Aušrinė and three sons: Domantas, Tautvydas, and Žygimantas. Tautvydas plays for the Unicaja Málaga junior team,[17] and was a member of the Lithuania under-19 national team that won the 2011 FIBA Under-19 World Championship.[5] The other two sons also represent Lithuanian national teams in FIBA youth tournaments of their age groups; in August 2011, Domantas was touted as Lithuania's top under-15 player.[5] During the European U-16 championship in 2012, Domantas averaged 14.1 points and 14.4 rebounds per game.[18] Domantas went on to play at Unicaja, but did not play under a professional contract; this enabled him to sign to play college basketball at Gonzaga beginning in the 2014–15 season.[19]

In September 2011, Sabonis suffered a heart attack while playing basketball in Lithuania. Doctors said that the heart attack was not life-threatening.[20]

Pop/Rock band Margot & the Nuclear So and So's recorded a song dedicated to Arvydas Sabonis on their 2012 release Rot Gut, Domestic. He appeared on the Lithuanian cover of the video game NBA Live 2001.