Ascot /ˈæskət/ is an affluent small town in east Berkshire, England, about 25 miles (40 km) west of London.[1] It is most notable as the location of Ascot Racecourse, home of the prestigious Royal Ascot meeting. The village comprises three areas: Ascot itself, North Ascot and South Ascot. 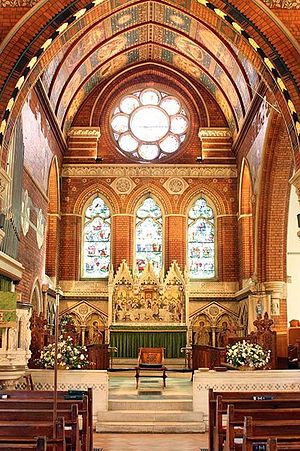 Chancel of All Saints' parish church

The Church of England parish church of All Saints, Ascot Heath is a red brick Gothic Revival building designed by T.H. Rushforth and built in 1864.[2] It has a richly-decorated interior. The east window of its chancel is a Jesse window with stained glass made by C.E. Kempe & Co in 1907.[2] Above it is a rose window by Hardman & Co.[2]

The Church of England parish church of All Souls, South Ascot is another red-brick Gothic Revival building. It was designed by J.L. Pearson and built in 1896–97.[2] It has a central tower with a pyramidal roof. Its nave has aisles of four bays.[2] The ceilings of the chancel, baptistery and the crossing under the tower are rib vaulted.[2] All Souls' is a Grade II* listed building.[3]

Ascot Priory was founded in 1861 for the Society of the Most Holy Trinity.[2] It has buildings designed by the architects Charles Buckeridge, William Butterfield, George Gilbert Scott and Leonard Stokes.[2]

The Roman Catholic church of St Francis is also a red-brick Gothic Revival building.[2] It was designed by the Roman Catholic priest and architect A.J.C. Scoles, built in 1889 and has an apsidal chancel.[2]

Independent senior schools in the area include Heathfield School (an all girls boarding school; alumnae include Tamara Mellon, Isabella Blow and Sienna Miller), St. George's School (a private girls senior school recently attended by Princess Beatrice of York), St Mary's School, Ascot, a Catholic all-girls boarding school (which Caroline, Princess of Hanover attended),located in South Ascot and the Licensed Victuallers' School, which is located down the road from Ascot Racecourse. Papplewick is also based in Ascot. The local state secondary school in the Ascot area is Charters School in nearby Sunningdale, which received a 'Grade 1 Outstanding' assessment from the Schools watchdog Ofsted in 2009.

Facilities tend to be geared towards the racecourse, but there is a small range of shops in the wide High Street. Most of the expected facilities one would expect to find in a small town are here, including a supermarket, petrol station and many cafes (including a Starbucks and a Costa, a Subway, Tesco Express and Budgens). Most buildings are post-war with flats above the ground floor retail space. Heatherwood Hospital (filming location for Carry on Matron) is at the western edge of the town. Ascot has a station on a bi-section of the railway line from London's Waterloo station to Reading, Bagshot, Aldershot and Guildford, originally built by the London and South Western Railway and now operated by South West Trains. As a consequence of the frequent service on this line, Ascot is now a commuter centre with its residents in both directions (westwards to Reading and eastwards to London). 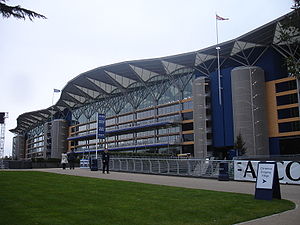 The new grandstand at Royal Ascot

The centrepiece of Ascot's year is held in June: Royal Ascot is without doubt the world's most famous race meeting, steeped in history dating back to 1711. The royal family attend the meeting, arriving each day in a horse-drawn carriage. It is a major event in the British social calendar. Although this has placed Ascot onto the British social map, it has many direct effects on the local community, not least of which are the associated traffic problems. The course is still owned by the crown.

Ascot Racecourse employs over 70 full-time staff, which increases temporarily to 6,000 during Royal Ascot week. The village has a variety of businesses located at the Ascot Business Park, opened in 2008, including the UK headquarters of global toy manufactuter Jakks Pacific, in addition to numerous small and medium enterprises. The Chartered Institute of Building, a professional body for those working in the construction industry and built environment, is also based in Ascot.

Ascot also has an Army Cadet Force unit, called 4 Platoon Ascot. The unit, being badged as Irish Guards (due to the unit belonging to A Company, Berkshire ACF; a company currently badged to the Household Division), means that the unit regularly sees Irish Guards events such as the St. Patricks Day Parade, and even has the privilege of taking part in an Irish Guards ACF skills competition, run by the battalion. It parades at 19:15 until 21:30 on a Monday and Wednesday night at Licensed Victuallers' School and actively recruits from the local and surrounding area. The unit used to parade at Ascot Racecourse, however they were evicted due to an appeal made out by the Racecourse owners. They now temporarily parade at the Sixth Form centre inside the school. The unit now has a new Detachment Commander – Staff Sergeant (SSI) Richard Pelling.