Ascot Racecourse ("ascot" pronounced /ˈæskət/) is a British racecourse, located in Ascot, Berkshire, England, which is used for thoroughbred horse racing. It is one of the leading racecourses in the United Kingdom, hosting nine of Britain's 32 annual Group 1 horse races.

Ascot today stages twenty-six days of racing over the course of the year, comprising eighteen flat meetings held between the months of May and October inclusive. It also stages important jump racing throughout the winter months. The Royal Meeting held each June, remains a major draw, its highlight being The Gold Cup. The most prestigious race is the King George VI and Queen Elizabeth Stakes run over the course in July. 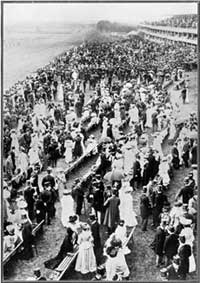 In 1813 Parliament passed an Act to ensure that the grounds would remain a public racecourse. A new grandstand was opened in 1839 at a cost of £10000.[2] A further Act of Parliament of 1913 (Ascot Authority Act 1913 c.lxxxiv) establishing the Ascot Authority which entity manages the racecourse to this day. From its creation until 1945 the only racing that took place at Ascot was the Royal Meeting, a four-day event. Since that date, more fixtures have been introduced to the grounds, notably steeplechase and hurdles in 1965. 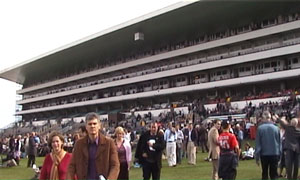 Ascot racecourse closed for a period of twenty months on 26 September 2004, for a £185 million redevelopment funded by Allied Irish Bank and designed by Populous and Buro Happold. As owner of the Ascot estate, Her Majesty Queen Elizabeth reopened the racecourse on Tuesday 20 June 2006.

Upon re-opening the new grandstand attracted criticism for failing to provide sufficiently raised viewing for patrons to watch the racing, and devoting too much space to restaurants, bars and corporate hospitality facilities. At the end of 2006 a £10 million programme of further alterations was announced to improve the viewing from lower levels of the grandstand using an innovative steel composite product ("SPS" sandwich plate system) to reprofile the existing concrete terraces. However, the upper levels provide far less accommodation for the everyday racegoer than was present in the former stand.[3]

In March 2009 it was confirmed that the main sponsors of Ascot, William Hill would be ceasing their sponsorship deal, citing that the decision by the BBC to reduce live race coverage as the main reason in its decision making process.[4]

In July 2009 Ascot Racecourse also hosted the third round of the UAE President's Cup.[5]

The Royal Ascot is the centrepiece of Ascot's year and dates back to 1711 when it was founded by Queen Anne. Every year Royal Ascot is attended by Elizabeth II and other members of the British Royal Family such as The Prince of Wales, arriving each day in a horse-drawn carriage with the Royal procession taking place at the start of each race day and the raising of the Queen's Royal Standard. It is a major event in the British social calendar, and press coverage of the attendees and what they are wearing often exceeds coverage of the actual racing. There are three enclosures attended by guests on Royal Ascot week. 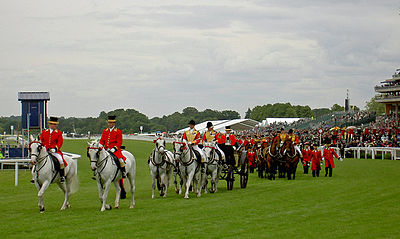 The Royal carriages depart after The Queen's arrival at the races

The Royal Enclosure is the most prestigious of the three enclosures, with recent visits from the Queen and Royal Family members. Access to the Royal Enclosure is restricted, with high security on the day. First-time applicants must apply to the Royal Enclosure Office and gain membership from someone who has attended the enclosure for at least four years. For existing badgeholders, an invitation is sent out by Her Majesty's Representative[6] to request badges. The badgeholder's name is written onto the badge and can be used only by that person; the colours of the badges vary each day for one-day applicants. Those in the Royal Enclosure have the options of fine dining and hospitality, and a selection of bars. The dress code is strictly enforced. For women, only a day dress with a hat is acceptable, with rules applying to the length and style of the dress. In addition, women must not show bare midriffs or shoulders. For men, black or grey morning dress with top hat is required.

Over 300,000 people make the annual visit to Berkshire during Royal Ascot week, making this Europe’s best-attended race meeting. There are sixteen group races on offer, with at least one Group One event on each of the five days. The Gold Cup is on Ladies' Day on the Thursday.

Prize money for The St James's Palace Stakes and Coronation Stakes was increased by £100,000 to £350,000, which put each race on equal footing with the Queen Anne Stakes, King's Stand Stakes and Gold Cup.

The Windsor Forest Stakes was renamed, with the Queen’s consent, The Duke of Cambridge Stakes, recognising the new title given to Prince William, and saw a 25% increase in its value to £125,000.

Ascot now stages the new climax of the British flat racing season, designed to increase the sport's public profile and to rival the Arc weekend and Breeders' Cup to attract the best horses. The first Champions' Day was staged on 15 October 2011 and was generally regarded as a success, though overshadowed by controversy over tough new regulations on the use of the whip. The meeting includes the Queen Elizabeth II Stakes, the Champion Stakes moved from Newmarket, the British Champions Long Distance Cup won by Gold Cup winner Fame and Glory, the British Champions Sprint Stakes won by Deacon Blues (also a Royal Ascot winner) and the British Champions Fillies' and Mares' Stakes won by Epsom Oaks winner Dancing Rain.

The racecourse is also home to Royal Ascot Cricket Club, which was founded in 1897 and their ground is situated in the middle of the racecourse. Ascot United F.C. are located towards the eastern side of the site.[7] A new clubhouse, stand and floodlighting have recently been erected.

The racecourse is the setting for a scene in the musical My Fair Lady and the subject for the song "Ascot Gavotte".

The racecourse was used as a filming location in the James Bond film A View to a Kill (1985), where Bond (then played by Roger Moore) was beginning his mission to defeat the villainous Max Zorin (Christopher Walken), whose horse was racing there.

The James Bond production crew returned to Ascot Racecourse for Skyfall (2012), where it stood in for Shanghai Pudong International Airport.[8]

The stand, completed in 2006 and designed by architects Populous and engineers Buro Happold and built by Laing O'Rourke