Ascott-under-Wychwood is a village and civil parish in the Evenlode valley about 4.5 miles (7 km) south of Chipping Norton, Oxfordshire. The 2011 Census recorded the parish's population as 560.[1]

Ascot d'Oilly Castle was built in about 1129–50 and a stone tower was added to it in the 13th century. The castle bailey is now occupied by the manor house, which is mainly 16th and 17th century but contains some 13th century buttressed and other stonework.[2]

The upper stages of the bell tower were built in the 15th century.[3] The building was restored in 1857–59 under the direction of the Oxford Diocesan architect G.E. Street.[3] Holy Trinity is a Grade II* listed building.[4]

The tower has a ring of six bells. Five of these including the tenor bell were cast in 1744 by Henry III Bagley[5] of Chacombe, Northamptonshire, who at the time had also a bell-foundry at Witney. The treble was cast in 1905 by Mears and Stainbank of the Whitechapel Bell Foundry.[5] There is also a Sanctus bell cast in 1797 by Thomas I Mears.[5]

In 2001 the Church of England Benefice of Ascott-under-Wychwood, Chadlington and Spelsbury merged with that of Enstone and Heythrop to form the Chase Benefice.[6] 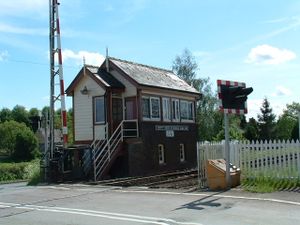 The Oxford, Worcester and Wolverhampton Railway was built in 1845 and opened Ascott-under-Wychwood railway station to serve the village. The OW&WR is now the Cotswold Line and the station is served by First Great Western trains.

The village school was designed by the architect C.C. Rolfe and built in 1871.[3]

In 1873 a farmer dismissed several men of Ascott-under-Wychwood because they had formed a branch of the National Union of Agricultural Workers. He hired labourers from the village of Ramsden to work as strikebreakers but a group of women from Ascott-under-Wychwood tried to dissuade the Ramsden labourers from working. 16 of the women were arrested, tried by magistrates in Chipping Norton and given short sentences of imprisonment in Oxford Castle. Their convictions were met with rioting in Chipping Norton, questions in Parliament and a royal pardon from Queen Victoria. The 16 are commemorated as the Ascott Martyrs.[7] In 1874 at least four of the women emigrated with their families to New Zealand, where they now have numerous descendants.[8] In 1973 on the centenary of the women's ordeal a commemorative bench was erected in the village.[9]

Ascott-under-Wychwood has a community shop, which was opened in 2003.[13]