Ash in the parish of Musbury in the county of Devon is an historic estate, long the residence of the ancient Drake family, the heir of which remarkably was always called John, only one excepted, for ten generations.[2] It was formerly believed to have been the birthplace of John Churchill, 1st Duke of Marlborough (1650-1722), whose mother was Elizabeth Drake, but was in fact probably in ruins at the time of his birth. The future Duke was however baptised in 1650 in the Chapel at Ash, which had been licensed by the Bishop of Exeter in 1387.[3] Ash was "burnt and demolished" during the Civil War and "lay long in ruins" during which time the family moved one mile away to Trill, Axminster.[4] John IX Drake (1625-1669), the wartime occupant who had suffered so greatly for the Royalist cause received some recompense at the end of the troubles by being created a baronet by King Charles II on the Restoration of the Monarchy in 1660.[5] Ash was rebuilt "to a greater perfection than it was of before" by Sir John Drake, 2nd Baronet (1647–1684).[6] The last in the male line was Sir William Drake, 6th Baronet (ca. 1695–1733), who died without progeny and bequeathed all his estates to his widow Anne Williams (d.1793), who remarried to George Speke, MP, and had by him a daughter Anne Speke (before 1741–1797), who brought the Drake estates, including Ash and the advowson of Musbury, to her husband Frederick North, 2nd Earl of Guilford (1732–1792), who sold them piece-meal to various persons.[7] Ash House survives today as a grade II* listed private residence in much the same form as depicted by Swete in 1795.[8]

The Drake family of Ash rejected a claim by Admiral Sir Francis Drake (c.1540-1596) of Buckland Abbey, whom they considered to be below the rank of gentry, that he was descended from their ancient Drake family of Ash, and a famous physical confrontation broke out in the court of Queen Elizabeth I between Admiral Sir Bernard Drake (c.1537-1586) of Ash and Admiral Sir Francis Drake of Buckland Abbey when the latter made claim to the armorials of Drake of Ash.[9]

200px
135px
Canting arms of Drake (from Latinized form Draco, "a dragon"[30]) of Ash: Argent, a wyvern wings displayed and tail nowed gules.[31][32] Left: Detail from top of 1611 monument in Musbury Church; right 19th century stained glass, Musbury Church, showing crest: A dexter cubit arm couped at the elbow proper holding a battle-axe sable[33] The Drake motto is: Aquila non captat muscas ("The eagle does not catch flies"). The Drake wyvern gules was adopted by John Churchill, 1st Duke of Marlborough for both his heraldic supporters, in recognition of his maternal descent from the Drakes of Ash
File:DrakeMonument MusburyChurch Devon.PNG
Monument to the Drake family of Ash, south aisle of Musbury Church. It depicts the following persons: left: John VI Drake (d.1558), with his wife Amy Grenville (d.1577); centre: Admiral Sir Bernard Drake (c.1537-1586), his son, with his wife Gertrude Fortescue (d.1601); right: John VII Drake (d.1628), who erected the monument in 1611, son of Sir Bernard, with his wife Dorothy Button (d.1631). Also shown four times are the arms of Drake: Argent, a wyvern wings displayed and tail nowed gules. Gilded inscribed biographical tablets appear under each couple of kneeling figures
145px
180px
Right: Monumental brass in Filleigh Church, North Devon, depicting Sir Bernard Drake (d. 1586), who erected the monument to which it was originally affixed in memory of his brother-in-law, Richard Fortescue (d. 1570). The arms of Drake of Ash are shown in the dexter escutcheon, in a mutilated condition: Argent, a wyvern wings displayed and tail nowed gules. The sinister escutcheon shows the quarterings of the arms of Drake's wife, Gertrude Fortescue. Left drawing of reconstructed brass

The earliest record of the Drake family of Devon is in an undated "very old deed" in Latin quoted by Westcote to have been witnessed by "Walterus Draco" and "Wymondus de Dennex" and others.[34] Thus Draco (from Greek δράκων (drakon))[35] was the Latinized form of the name "Drake", meaning in Latin "dragon", referred to in the family's canting arms of a wyvern displayed gules.

Heer lieth the body of John Drake of Aish Esq.r and Amie his wife whoe was the daughter of Sr Roger Graynfeild Kt. by whom hee had issue six sones where of lived three at his death viz Barnard, Robart and Richard. He died the 4th of October 1558 and she died the 18th of Februarie 1577

His third son as mentioned above was Richard Drake (1535-1603) of Esher , MP, an Equerry of the Stable and Groom of the Privy Chamber to Queen Elizabeth I.

Heer is the monument of Sr Barnard Drake Kt. who had to wife Dame Garthrud the daughter of Bartholomew Fortescue of Filly Esqr. by whom hee had three sonnes and thre daughters where of whear five living at his death viz John, Hugh, Marie, Margaret and Helen. He died the Xth of April 1586 and Dame Garthrud his wief was here bured the XIIth of Februarie 1601 unto the memorie of whome John Drake Esqr. his sonne hath set this monument Anno 1611 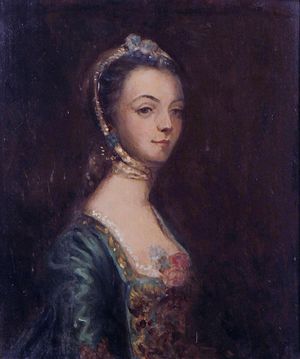 The last in the male line was Sir William Drake, 6th Baronet (ca. 1695–1733), who died without progeny and bequeathed all his estates to his widow Anne Williams (d.1793), who remarried to George Speke, MP, of Whitelackington in Somerset, and had by him a daughter Anne Speke (before 1741–1797), who brought the Drake estates, including Ash and the advowson of Musbury, to her husband Frederick North, 2nd Earl of Guilford (1732–1792), who sold them piece-meal to various persons.[63]

Rev John Swete (d.1821) of Oxton House, Kenton in Devon, the Devon topographer and arbiter of landscape gardening, visited Ash on 13 February 1795, as part of one of his tours around the county. His watercolour painting of the house and corresponding journal entry survives, in the Devon Record Office. He was familiar with Prince's text and noted that the door and windows of the chapel were then blocked up and in contrast to Prince's description wrote:

"We find all its beauty passed away - the park destroy'd, the ponds filled up - except in one long parallelogram at the entrance, and the garden more abundant in weed than flowers or choice fruit."