The Ashbourne portrait is one of the numberless portraits that have been falsely identified as portrayals of William Shakespeare. At least 60 such works had been offered for sale to the National Portrait Gallery in the 19th century within the first forty years of its existence; the Ashbourne portrait was one of these.[1] The portrait is now a part of the collection of the Folger Shakespeare Library in Washington, DC.

The identity of the artist is unknown.[2] At some point the portrait was altered to cater to public demand for more pictures of the bard and to conform to 19th century ideas of Shakespeare.[3] The hair over the forehead was scraped out and painted over to create a bald patch. It was also lengthened at the sides, an appearance associated with Shakespeare. The date was also altered to fit Shakespeare's age. The coat of arms was painted over. In this form the painting bore the date 1611 and purported to show Shakespeare at the age of 47.[4]

In 1940, Charles Wisner Barrell argued on the basis of x-ray evidence that the portrait originally depicted Edward de Vere, 17th Earl of Oxford and that this was evidence that Oxford was the true author of Shakespeare's plays. In 1979 the coat of arms was rediscovered following restoration. It was identified as that of Hugh Hamersley (1565–1636), Lord Mayor of London in 1627.

File:William-shakespeare-by-g-f-storm-mezzotint-mid-19th-century.jpg
The portrait as it appeared in G.F. Storm's mezzotint.

It was first brought to light by Clement Usill Kingston in 1847.[5] Kingston was a schoolmaster and amateur painter living in the town of Ashbourne, Derbyshire, after which the portrait came to be named. He wrote to Abraham Wivell, an authority on Shakespeare portraits, explaining the circumstances in which he claimed to have found it. According to Kingston, "a friend in London sent me word that he had seen a portrait of Shakespeare, that he was positive it was a genuine picture, and that the owner only valued it as being a very fine painting. Being too poor to purchase it himself, he advised me by all means to have it." He immediately purchased it. Kingston told Wivell that the design on the book held in the subject's hand was a combination of "the crest of the Shakespeare family and the tragic mask". After examining the work, Wivell enthusiastically endorsed it.[6]

It was subsequently reproduced in mezzotint by G.F. Storm. In this form it was widely reproduced during the 19th century, having entered the canon of Shakespeare portraits.

In 1910 M.H. Spielmann devoted two articles to a critical analysis of the portrait, with regard to provenance, attribution and identification. He dismissed Kingston's claim that the Shakespeare "family crest" could be seen on the book. He also rejected a suggestion that the subject was portrayed in the character of Hamlet. He concluded that the aristocratic nature of the portrait did not conform to Shakespeare's status as a playwright, and that the painting's historical subject was a mystery. However, he accepted that Shakespeare could be the portrait's subject.[7]

In 1932, the writer Percy Allen argued that the painting originally depicted Edward de Vere, 17th Earl of Oxford, but had been later retouched. In 1940, Charles Wisner Barrell investigated the portrait using X-rays and concurred with Allen's view. Art historian William Pressly, who catalogued the Folger's paintings,[9] and directed the 1988 restoration of the work, states that the controversy surrounding the sitter's identity was resolved in 1979, when restorative work on the painting revealed conclusively[10] that it had been begun as a portrait of Sir Hugh Hamersley. The Folger Library dates the painting to 1612, and while stating that most researchers identify the painting's subject as Sir Hugh Hamersley, notes that some Oxfordians contend it depicts Edward de Vere.[11] It currently hangs in the Folger Shakespeare Library. 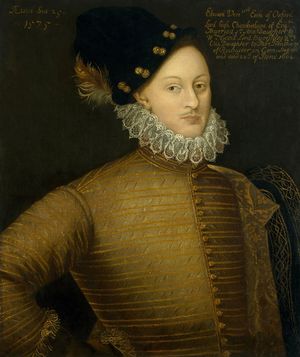 Percy Allen argued that this portrait of Edward de Vere matched the physiognomy of the Ashbourne portrait.

In 1932, Percy Allen published The Life Story of Edward de Vere as "William Shakespeare". Allen was a supporter of J. Thomas Looney's theory that the works of Shakespeare were written by de Vere, the 17th Earl of Oxford. He argued that the features of the man in the Ashbourne portrait corresponded to those of de Vere and that the costume suggested a date earlier than 1611. He believed that the portrait dated from 1597, but had later been retouched as part of "an elaborate plot".[12]

In 1940, Charles Wisner Barrell, a former director of Motion Pictures for the Western Electric Company,[13] an American follower of Looney's and Allen's views, examined the portrait using X-ray and infra-red photography, and proved what Allen had suspected, namely that the painting had indeed been tampered with. He supported Allen's conclusion that it was a retouched portrait of Edward de Vere. On the basis of what was taken to be the artist's monogram, C.K., beneath a coat of arms, he concluded that the portrait was the work of Cornelius Ketel, who had been active in England and had reportedly done one of Oxford's portraits. He also suggested that the coat of arms belonged to Oxford's wife, Elizabeth Trentham.[14][15] Ketel had in fact been commissioned in 1577 to paint a series of 19 portraits for the Cathay Company,[16] in which Oxford had invested and lost a large sum of money.[17]

Barrell's identification received wide exposure, and caused a sensation. [18] Barrell believed he had proven that there was literally a cover-up, a conspiracy to conceal the identity of the Edward de Vere he believed to be the real author of Shakespeare's works.[19] In 1945 Percy Allen consulted the psychic Hester Dowden, who communicated with the spirit of Oxford. Oxford confirmed that "it is a portrait of me; you are right; it bears my wife's blazon". He could not recall the name of the artist but he was "a fashion at the time".[20]

In late 1948/early 1949 a further series of X rays was made at the National Gallery of Art by Stephen S. Pichetto. These failed to reveal a "C. K." beneath the coat of arms. It is conjectured that if they were there, they probably stood for "Clement Kingston", the original owner who profited from the "discovery" of a new portrait ostensibly depicting Shakespeare.[21] In 1948 Barrell sued Giles E. Dawson, the curator of Books and Manuscripts for the Folger Shakespeare Library in Washington, D.C for suggesting in a letter that Barrell had doctored his x-ray pictures.[22] Though he had promised to supply the Folger library with copies of the photographs he had commissioned, he never did so, and their present whereabouts are unknown.[23] Folger director Joseph Quincy Adams, according to Dawson, also believed Barrell had tampered with his evidence.[24] The suit was dismissed in 1950.

File:HughHamersley.jpg
A portrait of Hamersley at the Haberdasher's hall, London

In 1979, the Folger commissioned Peter Michaels to restore the portrait. In removing the overpaint, he uncovered the coat of arms, and his assistant Lisa Oehrl made a sketch of it, unaware of the sitter's identity. It was Lilly Lievsay, Folger cataloguer of manuscripts, and Folger curator Laetitia Yeandle who, on the basis of this drawing, linked the image of the sketch conclusively to the armorial coat of Hamersley.[25] The restorative work also clarified the date, which had been tampered with to yield the year 1611 (when Shakespeare was 47). Beneath the second 1 of that date a 2 is clearly visible, indicating it was executed in 1612, 8 years after Oxford's death,[26] when Hamersley was 47 years old. Above the date is written aetatis suae.47 (aged 47).[27] He had not, at that time, been granted his coat of arms, and art historian William Pressly conjectures that they were either included in anticipation of the honour, or painted in later.[28]

The original alterations to the Hamersley painting, to make it look like what people would expect of a portrait of Shakespeare, is thought to be the handiwork of Clement Kingston, who was also a painter.[29] Some Oxfordians, though disappointed, quickly accepted the results, and claimed partial credit for the new findings.[30]

The identity of the sitter is, however, still believed to be de Vere by some Oxfordians. Oxfordian Barbara Burris published articles arguing that the Folger had deliberately erased the CK monogram and "that the fashions the sitter wears in the painting date to about 1580, when Hamersley would have been 15 and Oxford 30, and when Ketel [who returned to Holland in 1581] was working in England."[31]