The earliest Europeans to explore Ashe County were Bishop Augustus Gottlieb Spangenberg - head of the Moravian Church in America - and his associates, Timothy Horsefield, Joseph Mueller, Henry Antes, Johan Merck, and Herman Loesch. Bishop Spangenberg wrote about his journey in Ashe in a diary that has been preserved by the Moravian church. He was given 100,000 acres (400 km2) in Virginia as a place for his fellow Moravians to settle. The only one of Spangenberg's group to return and permanently settle in Ashe County was Herman Loesch. Other early settlers were David Helton, William Walling, William McLain and Daniel Boone, the famous pioneer. With the exception of Boone, these men and their families all settled in Ashe in 1771.

During the Revolutionary War one skirmish was fought in Ashe County. It is called the "Battle of the Big Glades". The battle was fought in July 1780 between a force of Americans, led by Captain Robert Love, and a force of 150 British Loyalists on their way to Charlotte to join Lord Cornwallis, the British commander in the Southern colonies. The Americans won the skirmish.

In the 1780s, Ashe County was considered a part of the "State of Franklin". It consisted of three counties - Washington, Greene, and Sullivan. Ashe was considered to be a part of Washington County. The "State of Franklin" marked the beginnings of the State of Tennessee. Ashe County did not formally become a part of North Carolina until 1785. In late 1799 composed of 977 square miles, Ashe was finally pronounced an official county of the United States and of North Carolina. Many family surnames noted in the 1800 Ashe County Census, Blevins, Hart, Bare, Stamper, Miller, Burkett, Gambill, Baldwin, and Ballou as a sample, are still present today. Ashe County was named in honor of Samuel Ashe, a Revolutionary patriot, a superior court judge, and the Governor of North Carolina from 1795 to 1798. From 1807 to 1913 the county went through numerous boundary changes. In 1849, to form Watauga County, the southwestern part of Ashe County was combined with parts of Caldwell County, Wilkes County, and Yancey County. Ten years later in 1859, the eastern part of the remainder of Ashe County became Alleghany County.

Ashe County is located in extreme northwestern North Carolina. The county is bordered by two states: Virginia on the north; and Tennessee to the west. The county is located entirely within the Appalachian Mountains region of North Carolina. Most of the county is located atop a rolling plateau that ranges from 2,500 feet (760 m) to 3,000 feet (910 m) above sea level. On the county's southeastern border the land drops to about 2,300 feet (700 m) toward the Foothills region of North Carolina in neighboring Wilkes County, North Carolina. Numerous mountains and hills dot the plateau. The highest being The Peak at 5,195 feet. In total five mountains tower 5,000 feet plus. Among the highest peak is Mount Jefferson, which is a State Natural Area and rises to 4,665 feet (1,422 m), and towers more than 1,600 feet (490 m) above the towns of Jefferson and West Jefferson.

The county's main river is the New River, which is one of the oldest rivers in the world, and one of the few major rivers in the southeastern United States to flow primarily north instead of south, east, or west. There are 34 recorded creeks and streams that flow into the New River in Ashe County. In 1998 the river was designated an "American Heritage River" by President Bill Clinton, and it is famed for its beautiful rural scenery, clear water, fly fishing, and kayaking and canoeing.

Ashe County generally is known for its mountain scenery, and the tourism industry is an important mainstay of the county's economy. The Blue Ridge Parkway runs along the county's southeastern border. Ashe County has historically consisted of rural farmland, with numerous cattle and poultry farms. However, cattle farming in recent decades has given way to the industry of raising Christmas trees. Many cattle farmers have switched to growing Christmas trees, and in 1997, 2007, 2008, and 2012, an Ashe County Christmas tree was selected as the official White House Christmas Tree by the National Christmas Tree Association.[4] The tree was put on display in the Blue Room (White House). As of 2014 Ashe County grows more Christmas Trees than any other County in the Eastern United States.

Ashe County, North Carolina has a considerably different climate than most of the Southeastern United States. Summers typically average around 80 degrees Fahrenheit. Temperatures rarely exceed 90 degrees Fahrenheit, but temperatures such as they did in 2012 can reach the mid-90s. 100+ has never been observed. Summer nights are cool, and temperatures often dip to near 60 Fahrenheit even in July. In winter there is snow, averaging about 30 inches for the towns of Jefferson & West Jefferson. Considerably more snow falls on the peaks and the western slopes of the Appalachian Mountains. During the 2009-2010 snow season Jefferson received some 60+ inches of snow. For the past two seasons (2013-2014 & 2014-2015) West Jefferson has averaged 27 inches of snow. Snow has been observed as early as around October 1st and as late as around May 1st. Ashe County is also a very windy location especially in winter when several times per year the Jefferson Airport sees the wind gusting 60 to 85 MPH. In addition it does get very cold in Ashe County. In 2015 the temperature dipped below Zero Fahrenheit on four occasions. The coldest being Negative Eight Fahrenheit. The average winter high is in the 40s with an average low near 20 Fahrenheit. Often feeling more like the northeastern United States when wind chill factors are also observed.

The racial makeup of the county was:

2.42% of the population was Hispanic or Latino of any race.

The racial makeup of the county was:

4.8% of the population was Hispanic or Latino of any race.

There were 11,755 households out of which 23.1% had children under the age of 18 living with them, 54.5% were married couples living together, 9.3% had a female householder with no husband present, and 31.7% were non-families. 27.5% of all households were made up of individuals and 13.0% had someone living alone who was 65 years of age or older. The average household size was 2.29 and the average family size was 2.75.

The Jefferson Post is the newspaper of record for Ashe County and is a twice-weekly publication based in West Jefferson. It has existed in its current form for 23 years. The publication is owned by Civitas Media.

Also based in West Jefferson, Ashe Mountain Times covers all of Ashe County. The newspaper is owned by Jones Media publishing company and is a sister publication of the Watauga Democrat in Boone, North Carolina.[11] 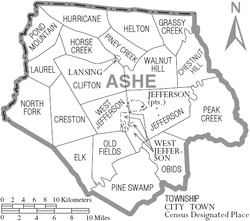 Ashe County has been home to, produced, or been visited by, several prominent people. Among them are Monte Weaver from Helton, a famous baseball player, who pitched for the Washington Senators and pitched a World Series game in 1933. After being traded from the Senators, he pitched for the Boston Red Sox, before being called into service in World War Two. Weaver died in 1994. Albert Hash a well-known and beloved fiddler and instrument maker at one time resided in Lansing. Helen Keller visited an Ashe County native, Marvin Osborne, in 1944 when he was wounded in France in World War Two. Loretta Lynn sang at the Central Food Market in West Jefferson in the late 1960s(The Central Food building formally housed a locally owned auto parts store and is now the location of a local restaurant). Roni Stoneman was a visitor to Ashe Park in the 1980s. In 1998, then-President Bill Clinton and his Vice-President, Al Gore, held a ceremony on the banks of the scenic New River to designate it as an American Heritage River.[12] After the ceremony, both men had lunch at the historic Glendale Springs Inn, also located in Ashe County.[13] Fiddle player G. B. Grayson was born in Ashe County in 1887.[14]