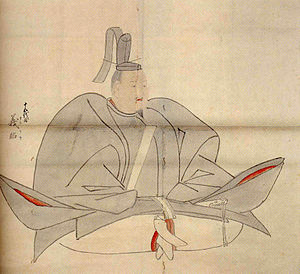 Ashikaga Yoshiaki
In this Japanese name, the family name is Ashikaga.

The absence of an effective central authority in the capital of Japan had lasted until the warlord Oda Nobunaga's armies entered Kyoto in 1568, re-establishing the Muromachi Shogunate under the puppet shogun Ashikaga Yoshiaki to begin the Azuchi-Momoyama period. Ashikaga Yoshihide, the fourteenth shogun, was deposed without ever entering the capital.

Most historians consider 1573 to have been the year in which the Ashikaga shogunate ended. The power of the Ashikaga was effectively destroyed on August 27, 1573 when Nobunaga drove Yoshiaki out of Kyoto. Yoshiaki became a Buddhist monk, shaving his head and taking the name Sho-san, which he later changed to Rei-o In.[4]

Some note that Yoshiaki did not formally relinquish his empty title; and for this reason, the empty shell of the shogunate could be said to have continued for several more years. Despite a renewed central authority in Kyoto and Nobunaga's attempt to unify the country, the struggle for power among warring states continued until unification and final peace was achieved long after his assassination in 1582.

Significant events shape the period during which Yoshiaki was shogun:

The span of years in which Yoshiaki was shogun are more specifically identified by more than one era name or nengō.[7]