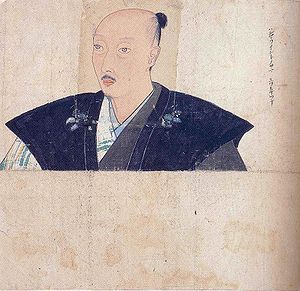 Ashikaga Yoshiharu
In this Japanese name, the family name is Ashikaga.

Ashikaga Yoshiharu (足利 義晴?, April 2, 1511 – May 20, 1550) was the twelfth shogun of the Ashikaga shogunate who held the reins of supreme power from 1521 through 1546 during the late Muromachi period of Japan.[1] He was the son of the eleventh shogun Ashikaga Yoshizumi.[2]

Not having any political power and repeatedly being forced out of the capital of Kyoto, Yoshiharu eventually retired in 1546 over a political struggle between Miyoshi Nagayoshi and Hosokawa Harumoto making his son Ashikaga Yoshiteru the thirteenth shogun.

From a western perspective, Yoshiharu is significant, as he was shogun in 1542, when the first contact of Japan with the European West took place. A Portuguese ship, blown off its course to China, landed in Japan.

Significant events shape the period during which Yoshiharu was shogun:[6]

The years in which Yoshiharu was shogun are more specifically identified by more than one era name or nengō.[7]