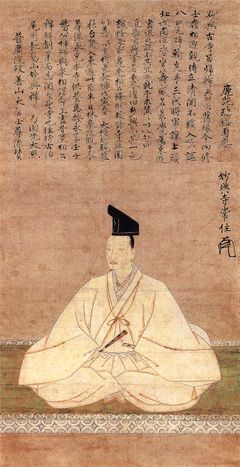 Ashikaga Yoshinori
In this Japanese name, the family name is Ashikaga.

Yoshinori, who had been a Buddhist monk since the age of ten,[3] became Seii Taishogun on the day of Yoshimochi's death. From amongst the handful of possible Ashikaga candidates, his name was selected by the shogunal deputy (Kanrei), Hatakeyama Mitsuie, who drew lots in the sanctuary of Iwashimizu Hachiman Shrine in Kyoto; and it was believed that Hachiman's influence had affected this auspicious choice.[4]

Significant events which shaped the period during which Yoshinori was shogun:

Yoshinori strengthened the power of the shogunate by defeating Ashikaga Mochiuji in the Eikyo Rebellion of 1438. During the period, Chinese contacts were increased and Zen Buddhism gained influence, which had broad cultural consequences.[1] For example, the Hon-dō or main hall at Ikkyu-ji is today the oldest standing T'ang style temple in the Yamashiro (southern Kyoto Prefecture) and Yamato (Nara Prefecture) Provinces. It was built in 1434 and was dedicated by Yoshinori.[11]

In 1432, trade and diplomatic relations between Japan and China were restored. Both had been discontinued by Yoshimochi. The Chinese emperor reached out to Japan by sending a letter to the shogunate via the kingdom of the Ryūkyū Islands; Yoshinori responded favorably.[4][12]

According to Mansai Jugo Nikki (満済准后日記), the system of the Tosen-bugyō (唐船奉行) was established in 1434 to mediate overseas trade. The functions of the Tosen-bugyō included: (1) defending trading ships in Japanese waters, (2) procuring export goods, (3) mediating between the Muromachi shogunate and shipping interests, and (4) managing record-keeping. It is significant that the Muromachi shogunate was the first to appoint the executive officers of the samurai class to high positions in its diplomatic bureaucracy. After Yoshinori's time, the totosen (渡唐船) (the fleet of ships going from Japan to Ming China) consisted of the ships belonging principally to three different kinds of owners: the Muromachi shogun, temples, and the shugo daimyo.[7]

Yoshinori was notorious for his oppressive measures and unpredictable dictatorial whims.[13] Yoshinori was assassinated by the Akamatsu family of military governors who invited him to a Noh performance at their residence and assassinated him during the evening play.[14] Yoshinori was 48 at the age of his assassination which was organized by Akamatsu Mitsusuke, who had learned that Yoshinori planned to bestow on a youthful male favorite three provinces belonging to Mitsusuke;[15] shortly thereafter, it was determined that his 8-year-old son, Yoshikatsu, would become the new shogun.[16]

Although the Ashikaga line continued through this seventh shogun, the power of the shoguns gradually eroded and the shogunate fell into decline.[17] The mere fact of that assassination and treason had become a reality served to undercut the previous military ethic of loyalty.[18]

The years in which Yoshinori was shogun are more specifically identified by more than one era name or nengō.[19]