From Infogalactic: the planetary knowledge core
Jump to: navigation, search
This article is about the country house and estate in Hertfordshire. For management college, see Ashridge Business School. For the village in Buckinghamshire, see Asheridge. 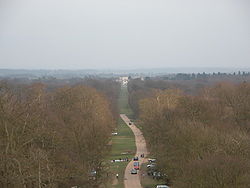 View from Bridgewater Monument to the house

Ashridge is a country estate and stately home in Hertfordshire, England in the United Kingdom; part of the land stretches into Buckinghamshire and it is close to the Bedfordshire border. It is situated in the Chiltern Hills, an Area of Outstanding Natural Beauty, about 2 miles (3.2 km) north of Berkhamsted and 20 miles (32 km) north west of London. Surrounding villages include Aldbury, Pitstone, Ivinghoe, Little Gaddesden, Nettleden, Frithsden and Potten End.

The estate comprises 5,000 acres (20 km2) of woodlands (known as Ashridge Forest), commons and chalk downland which supports a rich variety of wildlife. It also offers a good choice of waymarked walks through outstanding country. The estate is currently owned by the National Trust.

It should not be confused with Asheridge, which is a hamlet about five miles (8 km) south-west, the other side of Berkhamsted.

In mediæval times Ashridge was the location of Ashridge Priory, a college of the monastic order of Bonhommes founded in 1283 by Edmund, 2nd Earl of Cornwall, who had a palace here.[1] During the Dissolution of the Monasteries the priory was surrendered to Henry VIII who eventually bequeathed the property to his daughter, Elizabeth. The priory church was demolished during the reign of Elizabeth I.[2]

In 1848 the estate passed to the Earls Brownlow, another strand of the Egerton family,[5] and then in 1921 it was split, with the land passing to the National Trust, while the house and garden was acquired by speculators. In 1928 Urban Hanlon Broughton purchased the house as a gift for the Conservative Party intended to commemorate Andrew Bonar Law.[6] The house was turned into a "College of Citizenship", a political training and education centre.[7] During World War II, the building and grounds were temporarily requisitioned by the Charing Cross Hospital.[8]

In 1959 Ashridge College was re-launched to provide management training, and is now Ashridge Business School.[9]

Part of the estate became Ashridge Golf Club in 1932, and had Henry Cotton as its club professional in the late 1930s, including his most successful year 1937.[10] 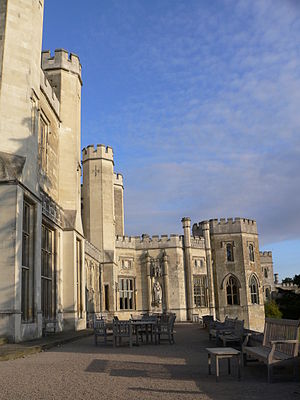 Decorative crenellations on the house 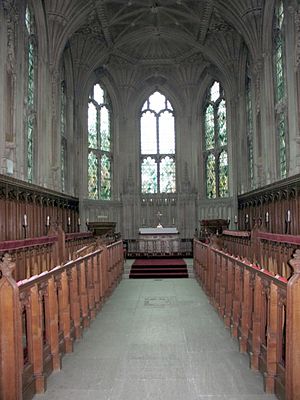 The 7th Earl of Bridgewater commissioned the architect James Wyatt to build the neo-Gothic Ashridge House as his home. Wyatt died in 1813 and the project was completed the following year by his nephew Jeffry Wyatt (later known as Sir Jeffry Wyatville).[11] The present house is regarded as one of the finest examples of early Gothic Revival architecture and is now a Grade I listed building.[12][13][14]

Ashridge house was built on the site of the 13th-Century priory building which had been demolished in 1800. Some parts of the old priory were incorporated into the house by James Wyatt, including the undercroft of the monastic refectory, featuring two aisles, seven bays and a rib-vaulted ceiling, which he repurposed as a beer cellar below the dining room and drawing room.[15]

The mansion is built of ashlar faced with Totternhoe stone with a castellated parapet and low-pitched slate roofs. It features a variety of casement windows including pointed arch and ogee lights typical of the early Gothic Revival style. Before his untimely death, James Wyatt completed the north-facing front entrance and the central block, containing the state apartments and western courtyards. Jeffry Wyatt added private apartment blocks at an angle to the main building and an orangery with a turret in 1815-17. The main entrance features a projecting porte-cochère and octagonal turrets, added by Jeffry Wyatt c.1814.[15]

Inside the mansion are a number of richly decorated state rooms; of the interior features, only the hall, the staircase tower and the chapel are Gothic in design. The high staircase hall features a stone stair with iron railing, surrounded by niches containing statues by Sir Richard Westmacott. At the centre of the fan-vaulted ceiling is a large dial connected to the weather vane on the roof which displays the current wind direction. The Brownlow Hall contains a giant frieze of the goddess Venus surrounded by putti with an armorial centrepiece and three early-Twentieth Century murals. Redecoration of the interiors was commissioned by Lady Marian Alford and executed in the neoclassical style in 1855-63 by Sir Matthew Digby Wyatt, including a replica of Guido Reni's Aurora ceiling and aedicular door surrounds. Among the alterations carried out after the conversion of the mansion into a college, the conservatory was altered by Clough Williams-Ellis in 1919 to form a dining-room. The boundary between Hertfordshire and Buckinghamshire originally passed through the dining room, though the house is now entirely in Hertfordshire.[13][15]

The house incorporates a Gothic Revival Chapel designed by James Wyatt, completed by Jeffry Wyatt in 1817. The most notable exterior feature of the chapel is its spire which was demolished in 1922 by Lord Brownlow as it had become structurally unsound. The spire which can be seen today is in fact a fibreglass replica which was erected in 1969. The chapel interior features a pair of Fourteenth-Century carved doors, fan-vaulted coving supporting a canted panelled ceiling; a set of carved oak choir stalls designed by Jeffry; and an array of Rayonnant lancet windows.[13] The windows were originally fitted with stained glass panels depicting scenes from the Bible; the glass was imported by the 7th Earl from Germany, having been originally designed in the Sixteenth Century for Steinfeld Abbey and Mariawald Abbey. The glass was auctioned off at Sotheby's in 1928 and acquired by the Victoria and Albert Museum.[16] One glass panel featuring the Blessed Virgin was placed in the nearby Church of Ss Peter and Paul at Little Gaddesden; another, depicting St Peter was in Christ Church, Croydon in London. Beneath the chapel is a vaulted medieval wellhouse with a 224-foot (68 m) well.[15]

During World War II, the building and the lawn in front of it was used as a secondary site for Charing Cross Hospital.[8]

Outside the house stands the timber-frame and brick Fourteenth-Century Monks' Barn in the Monks' Garden. It was remodelled in 1816 by Jeffry Wyatt who added a covered walkway. In 1884 Mathew Digby Wyatt added the red brick Fern House.[15]

Today the house is used as a management training college and is not normally open to the public, although special tours are offered during the summer.[17] 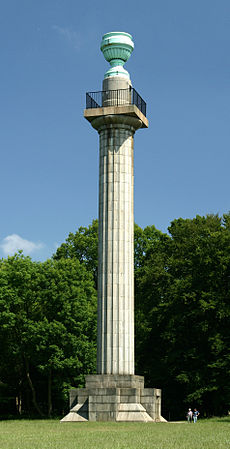 The Grade II* listed[18] Bridgewater Monument (grid reference SP970131) is a tower on the Ashridge estate, built in 1832 in memory of Francis Egerton, 3rd Duke of Bridgewater (1736–1803), "the father of inland navigation".[19] It is 108 feet (33 m) tall, with 172 steps inside, designed by Sir Jeffry Wyattville in a Doric style. It overlooks the village of Aldbury and the Grand Union Canal.

It was built away from Ashridge House as his mother wanted "not to see or be reminded of my infernal son".[20]

Ashridge Commons & Woods (grid reference SP975135) is a 640.1 hectare (1581.7 acre) Biological Site of Special Scientific Interest. The site was notified in 1987 under the Wildlife and Countryside Act 1981 and lies on the Buckinghamshire and Hertfordshire border and is home to much semi-natural vegetation. As well as this, the site has extensive areas of woodland, grass and plantations. The site supports bird-breeding community which as both country and national different species of birds.[21] Ashridge Woods are also well known for their Bluebell woods.[22]

Ashridge Common has been featured many times in film and television series due to its distinction as an area of natural beauty. Scenes for Sleepy Hollow, Jonathan Creek and Harry Potter and the Goblet of Fire were filmed in Ashridge's Frithsden Beeches wood.[23] The Ashridge House, which is now Ashridge Business School has been featured in films such as The Dirty Dozen.[24]