From Infogalactic: the planetary knowledge core
Jump to: navigation, search
This article is about the Italian town. For the type of embroidery, see Assisi embroidery. For the 1886 meteorite, see Assisi (meteorite).

Assisi (Italian pronunciation: [asˈsiːzi], from the Latin: Asisium) is a town and comune of Italy in the province of Perugia in the Umbria region, on the western flank of Monte Subasio.

It was the birthplace of St. Francis, who founded the Franciscan religious order in the town in 1208, and St. Clare (Chiara d'Offreducci), the founder of the Poor Sisters, which later became the Order of Poor Clares after her death. The 19th-century Saint Gabriel of Our Lady of Sorrows was also born in Assisi.

Around 1000 BC a wave of immigrants settled in the upper Tiber valley as far as the Adriatic Sea, and also in the neighborhood of Assisi. These were the Umbrians, living in small fortified settlements on high ground. From 450 BC these settlements were gradually taken over by the Etruscans. The Romans took control of central Italy by the Battle of Sentinum in 295 BC. They built the flourishing municipium Asisium on a series of terraces on Monte Subasio. Roman remains can still be found in Assisi: city walls, the forum (now Piazza del Comune), a theatre, an amphitheatre and the Temple of Minerva (now transformed into the Church of Santa Maria sopra Minerva). In 1997, the remains of a Roman villa were also discovered containing several well preserved rooms with frescoes and mosaics in a condition rarely found outside sites such as Pompei.

In 238 AD Assisi was converted to Christianity by bishop Rufino, who was martyred at Costano. According to tradition, his remains rest in the Cathedral Church of San Rufino in Assisi.

The Ostrogoths of king Totila destroyed most of the town in 545. Assisi then came under the rule of the Lombards as part of the Lombard and then Frankish Duchy of Spoleto.

The thriving commune became an independent Ghibelline commune in the 11th century. Constantly struggling with the Guelph Perugia, it was during one of those battles, the battle at Ponte San Giovanni, that Francesco di Bernardone, (Saint Francis of Assisi), was taken prisoner, setting in motion the events that eventually led him to live as a beggar, renounce the world and establish the Order of Friars Minor.

The city, which had remained within the confines of the Roman walls, began to expand outside these walls in the 13th century. In this period the city was under papal jurisdiction. The Rocca Maggiore, the imperial fortress on top of the hill above the city, which had been plundered by the people in 1189, was rebuilt in 1367 on orders of the papal legate, cardinal Gil de Albornoz.

In the beginning Assisi fell under the rule of Perugia and later under several despots, such as the soldier of fortune Biordo Michelotti, Gian Galeazzo Visconti and his successor Francesco I Sforza, dukes of Milan, Jacopo Piccinino and Federico II da Montefeltro, lord of Urbino. The city went into a deep decline through the plague of the Black Death in 1348.

The city came again under papal jurisdiction under the rule of Pope Pius II (1458–1464). 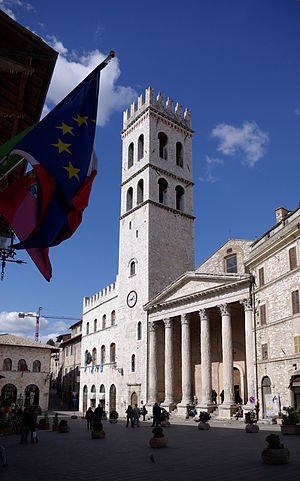 Temple of Minerva in the Piazza del Comune.

In 1569 construction was started of the Basilica of Santa Maria degli Angeli. During the Renaissance and in later centuries, the city continued to develop peacefully, as the 17th-century palazzi of the Bernabei and Giacobetti attest.

Now the site of many a pilgrimage, Assisi is linked in legend with its native son, St. Francis. The gentle saint founded the Franciscan order and shares honors with St. Catherine of Siena as the patron saint of Italy. He is remembered by many, even non-Christians, as a lover of nature (his preaching to an audience of birds is one of the legends of his life).

Assisi was hit by two devastating earthquakes, that shook Umbria in September 1997. But the recovery and restoration have been remarkable, although much remains to be done. Massive damage was caused to many historical sites, but the major attraction, the Basilica di San Francesco, reopened less than 2 years later.

UNESCO collectively designated the Franciscan structures of Assisi as a World Heritage Site in 2000. 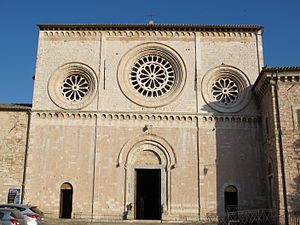 The town is dominated by two medieval castles. The larger, called Rocca Maggiore, is a massive presence meant to intimidate the people of the town: it was built by Cardinal Albornoz (1367) and expanded by popes Pius II (polygonal tower, 1458) and Paul III (the cylindrical bastion near the entrance, 1535-1538). The smaller of the two was built in Roman era: it has been only partially reserved, a small portion and three towers being open to the public. 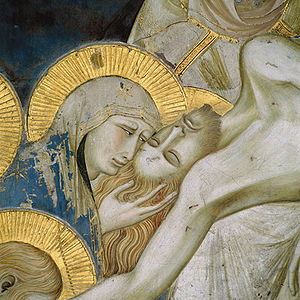 Assisi has had a rich tradition of art through the centuries and is now home to a number of well known artistic works.[2]

Artists Pietro Lorenzetti and Simone Martini worked shoulder to shoulder at Assisi. The Basilica of San Francesco d'Assisi includes a number of artistic works. Simone Martini's 1317 fresco there reflects the influence of Giotto in realism and the use of brilliant colors. Lorenzetti's fresco at the lower church of the Basilica includes a series of panels depicting the Crucifixion of Jesus, Deposition from the Cross, and Entombment of Christ. The figures Lorenzetti painted display emotions, yet the figures in these scenes are governed by geometric emotional interactions, unlike many prior depictions which appeared to be independent iconic aggregations. Lorenzetti's 1330 Madonna dei Tramonti also reflects the ongoing influence of Giotto on his Marian art, midway through his career.[3][4]

Festival Calendimaggio, held on 1–5 May, is a re-enactment of medieval and Renaissance life in the form of a challenge between the upper faction and the lower faction of the town. It includes processions, theatrical presentations, flag-weavers and dances.

Assisi Embroidery is a form of counted-thread embroidery which has been practised in Assisi since the 13th century.

Today the town has many groups coming to enjoy the simple peace of St. Francis. One such group has restored an 11th-century room and added altars to the world's religions. Other organizations, such as Assisi Performing Arts, complement Assisi's tranquility with music and other cultural events.

Assisi was the home of several saints. They include:

Assisi railway station, opened in 1866, forms part of the Foligno–Terontola railway, which also links Florence with Rome. The station is located at Piazza Dante Alighieri, in the frazione of Santa Maria degli Angeli, about 5 kilometres (3.1 mi) southwest of the city centre.

Assisi is twinned with: