From Infogalactic: the planetary knowledge core
Jump to: navigation, search
For the Rediffusion in general, see Rediffusion.

Associated-Rediffusion, later Rediffusion, London, was the British ITV contractor for London and parts of the surrounding counties, on weekdays between 1954 and 29 July 1968. Transmissions started on 22 September 1955 and the company is credited with being the first Independent Television company to launch.

The company was originally a partnership between British Electric Traction (BET) and its subsidiary Broadcast Relay Services Ltd. (trading as Rediffusion), and Associated Newspapers, owner of the Daily Mail. In the aftermath of the heavy financial losses made by the new ITV system in its initial years, Associated Newspapers sold the majority of its share to BET and Rediffusion, although the company did not drop the word "Associated" from its name until 1964. Associated Newspapers, later realising the potential of ITV, was a significant investor in the ITV franchise contractor for southern and south-east England, Southern Television.

Captain Thomas Brownrigg RN (Retired), the general manager of Associated-Rediffusion from 1955, had a very clear idea of what his new commercial television station was to be like - the BBC Television Service, with advertisements. To this end, the station had a heraldic-style on-air clock, referred to as "Mitch" by staff (after chief station announcer Leslie Mitchell, who had not only made the first announcement when A-R went on the air in 1955, but had done the same when the BBC TV service started in 1936).[citation needed]

Associated-Rediffusion officially began broadcasting on 22 September 1955 at 19:15 GMT, with actress Marjie Lawrence uttering the first words. That night the BBC, which had held the monopoly on broadcasting in United Kingdom, aired a melodramatic episode of their popular radio soap opera The Archers on the BBC Home Service in which core character Grace Archer was fatally injured in a fire. This was seen as a ploy to keep viewers and listeners away from the new station. Britain's first female newsreader Barbara Mandell appeared during the first full day of transmissions on 23 September 1955. The London weekend contractor ATV launched two days later.

This strategy was intended to allay fears that the new service would be aimed at the bottom of the market. Associated-Rediffusion sought to make ITV respectable. It did introduce popular game shows, but also provided quality programming across all genres gained large audiences both in its own London area and, as the ITV network grew, for its programmes shown across the country.

Boris Ford became Associated-Rediffusion's first head of schools broadcasting (1957–58), during which time he persuaded Benjamin Britten to compose his church opera Noye's Fludde for a series of programmes.[1] Ford was dismissed before the opera was produced, allegedly for administrative shortcomings and inexperience.[2] However, A-R continued its association with Britten, producing a highly successful telecast of his opera The Turn of the Screw in 1959.[3]

Rebranding and loss of franchise

In 1964, the directors had a change of heart, pensioning off Captain Brownrigg to the south coast and a directorship of the TV Times, and rebranding the station as "Rediffusion, London", with a very hip 1960s style, the face of Swinging London in the shiny prosperous new Britain. However, the new Rediffusion did not survive for long - in October 1967 the Independent Television Authority announced that there was no place for Rediffusion in the redrawn franchise pattern. Following changes to the ITV network structure, which resulted in the abandonment of the Midlands and North weekend franchises held by ABC Television, ABC lost all its franchises along with the rights to take over the Midlands, held by ATV, or the London Weekend franchise, awarded to the London Television Consortium. To preserve the sizeable ABC, the ITA proposed ABC and Rediffusion should form a new company: Thames Television. This was not a merger or "shot gun marriage" as is commonly stated and is an urban myth. ABPC, the parent company of ABC and BET, the parent company of Rediffusion, created Thames as a separate entity. Thames would use the resources and staff of ABC's Teddington Studios and Rediffusion's Television House. Rediffusion's parent company, BET, took a 49% stake in Thames, and was under-represented in the management of the new company. When Rediffusion objected to this, the ITA replied that either Thames took the new contract, or ABC took over. Rediffusion chose the former, and went off the air on 29 July 1968. Employees based at Wembley went to work for London Weekend Television whilst those at Television House were employed by Thames. Some managerial and presentation staff re-located to the new Yorkshire Television in Leeds.

The vast majority of Rediffusion's programme library was either lost or destroyed following the creation of Thames. Surviving titles from the Rediffusion archive are held by the BFI National Archive at Berkhamsted, Hertfordshire. Most titles are the intellectual property of Archbuild Limited, with the exception of some of Rediffusion's musical output such as Ready Steady Go! which is owned by Dave Clark International. Some Rediffusion shows have been rediscovered in recent years. In the late 1980s, a series of five At Last the 1948 Show compilations was found in the archives of Swedish broadcaster, SVT.

In the 1990s, the name "Associated-Rediffusion Television" and the adastral trademark were acquired by the British journalist Victor Lewis-Smith, and are now used by his own production company. Productions have included: 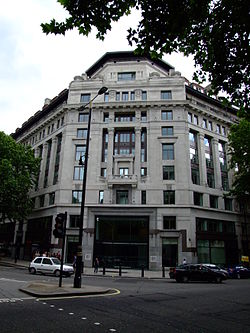 The company's administrative headquarters and transmission facilities were at Television House in Kingsway, London. Most programmes were produced at Wembley Studios in north-west London. However, a small basement studio at Television House, Studio 9, was occasionally used for current affairs programmes and was home to Ready Steady Go! during its first few years.

Television House had been known as Adastral House when it was the headquarters of the Air Ministry. This gave its name to A-R's logo, the 16-point Adastral Star, which appeared not only at the start and end of each commercial break but also between each advertisement. (The motto of the Royal Air Force is "per ardua, ad astra" - "through adversity to the stars".) The station's archives were also kept at these properties, with the original programme library situated on the roof of Television House with some storage in the film vaults at Wembley Studios.

Following Rediffusion's loss of franchise and the creation of Thames Television, the Wembley studios were leased to the newly formed London Weekend Television by order of the ITA, and the company officially took control of the premises on Monday 6 May 1968 for a contractual minimum term of three years. London Weekend Television subsequently vacated the studios in the late summer of 1972. Since then, the studios have been independently run, and are now known as Fountain Studios. Television House was used as Thames' headquarters until their Euston Road studios were built in 1970, and was since sold off.

When Rediffusion originally launched, as Associated Rediffusion, presentation consisted of a simple animated ident, featuring the station name, and a spinning star called the Adastral. This first ident was accompanied by a five note electronic fanfare, achieved by tapping out the morse code for 'A-R'. To accompany the ident, a timepiece was created based on a heraldic coat of arms and nicknamed 'Mitch' after Head of Presentation Leslie Mitchell.[4][5]

In 1964, Associated Rediffusion rebranded itself as Rediffusion London, using a black and grey ident featuring the same as previous, but with the new name now in a stripe and in a sans serif font. A new and simpler clock was designed featuring a 24-hour display at the bottom of the face and an adastral at the centre. The original timepiece 'Mitch' was given to the Science Museum, where it became the first ITV exhibit, and now resides in the National Media Museum, Bradford.[4]

Rediffusion used a number of continuity announcers throughout its 13 years on air, with Redvers Kyle and Muriel Young being the most recognised.

Rediffusion also offered a low-bandwidth cable TV and radio distribution system. This was based on connecting homes with multiple twisted-pair cables. Each pair carried a single TV or radio channel. Selection of TV or radio station was by means of a rotary switch, usually mounted on a wall or window frame close to the point of entry of the cable into the home. From this a two-wire cable led to the TV or radio. The TVs used on this system were stripped-down TV sets with no tuner or RF front-end and the radios were modified speakers with no RF section. Rediffusion abandoned this system of TV and radio distribution some time in the 1970s or early 1980s.

BET and Rediffusion Limited had strong links with the former British colonies. These included holding the concessions for wired and over-the-air radio and television stations. A subsidiary company, Overseas Rediffusion, operated these stations and also sold advertising time and programming for them. Stations included the radio station Rediffusion Barbados,[6] Singapore, Malaysia, Malta, Thailand and the wired television service Rediffusion Television in Hong Kong, the latter now known as Asia Television.

The Rediffusion retail chain, renting and servicing TVs, radios, VCRs and hi-fi systems, was common on high streets until it was bought by Granada Rentals in 1984.