The Associated British Corporation (otherwise known as ABC Television Britain) was one of a number of commercial television companies established in the United Kingdom during the 1950s by cinema chain companies in an attempt to safeguard their business by becoming involved with television which was taking away their cinema audiences. In this case, the parent company was the Associated British Picture Corporation (ABPC), which initially did not wish to become involved with the new broadcasting system, but were persuaded to do so by the Independent Television Authority (ITA) and the manager of their Pathé News subsidiary Howard Thomas, who became the new company's managing director.

When Kemsley-Winnick, one of the consortia that had been awarded a franchise in the new Independent Television network in 1954 collapsed, the ITA approached ABPC to step into the breach. Accordingly, the Corporation agreed to assume the franchises to broadcast on Saturdays and Sundays to the Midlands and the North of England. The contract agreeing to do so was signed on 21 September 1955, the day before Independent Television (ITV) began in London.

This gave the new ABC five months to begin broadcasting in the Midlands, the service beginning on 18 February 1956. Soon afterwards, they were also up and running in the North - they began broadcasting there for the first time on 5 May 1956. They were aided in part by the failure of the original contractor; Kelmsley-Winnick had ordered over £1 million (equivalent to £23.4 million today)[1] of production equipment from manufacturer Pye which they sold to ABC at a much discounted price.[2]

Structural changes in the regional contract areas meant that ABC no longer had a contract to re-apply for. The Northern area (renamed Lancashire) became a seven-day operation as did the Midlands. Existing weekday contractors (Granada and ATV respectively) were correctly considered the favourites. ABC consequently submitted two applications: one for the service for London at the weekend, the other for the Midlands seven-day operation although they favoured the first contract.

It was expected that ABC would be awarded the weekend London licence, but the strength of another application (from the London Weekend Television Consortium) ruled this out. This led to a situation where a successful company could be closed down through no fault of its own. To prevent this, the governing body of ITV, the Independent Television Authority, ordered a merger with the existing London weekday company Rediffusion, with ABC having majority control of the new operation.

Despite protests from Rediffusion, the two companies eventually became Thames Television. ABC ceased weekend broadcasting in the North and Midlands regions on 28 July 1968, and resumed on 30 July in the London region as weekday company Thames. 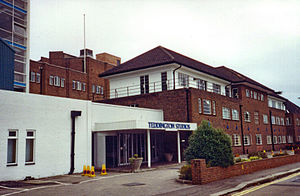 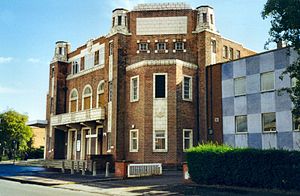 ABC operated three production sites and had a further sales office. The main production facilities were the former Warner Studios located in Teddington, Middlesex. Although outside of their contract area, ABC operated a London base as many performers could not venture outside of the capital to record programmes as they were often committed to runs of theatre plays in the West End. Upon the merger with Rediffusion this site became the main production base for the new company Thames Television.

In the Midlands they formed a joint venture with Midlands weekday licensee ATV to oversee the running of a production and transmission facility to be used by both. Alpha Television purchased a former cinema in Aston, near Birmingham and extended it by the construction of additional studios and office space; the site was known as the Alpha Studios.

ABC operated a northern studio centre in Manchester and a sales office based in Television House in the centre of the city. The production facility was converted from a former Capitol cinema in Didsbury. ABC vacated both premises during 1968. For their pre-filmed series, The Avengers (from 1965), ABC used their parent company's facilities in Elstree.

When ABC first went on the air, they utilised the branding of their sister company ABC Cinemas. This featured a triangular shield with the letters ABC upon it, and a bar across it with the caption 'Television'.[3] This lasted from the stations launch in 1956 until c.1958. The ITA had criticised ABC's original presentation style for being bland and too much attached to the existing ABC Cinemas chain.[citation needed]

As a result, ABC created a new brand ident featuring three arrows pointing to the bottom of the screen to reveal the letters ABC in turn and leaving a triangle behind and on top of the letters. At the end of this, the three triangles would snap together into the new ABC logo. This ident lasted until 1964 when the lettering font was altered slightly from a serif font to the latest bold used by the company, with this revision lasting until the company's demise.[3][4]

The logo uses the notion of threes, three triangles making another triangle, with the points of a triangle often being labelled 'A', 'B' and 'C' in geometry. The tune that was used for all of ABC's idents was a vibraphone playing 'la-te-doh' (or a tonic triad of 'A-B-C'). Out of this look, ABC Television developed a strong corporate identity[original research?], effectively becoming the first British TV station to recognise the importance of corporate branding[citation needed].

Networked programmes from ABC included the drama series Police Surgeon, The Human Jungle, Redcap, The Avengers, the Armchair Theatre series of single plays, the Habatales cartoons, the popular shows Thank Your Lucky Stars and Oh Boy!, the children's science fiction serial Emerald Soup, plus the gritty dramas, Undermind, Callan and Public Eye (both of which continued as Thames productions after 1968), Target Luna and its sequels: Pathfinders in Space, Pathfinders to Mars, and Pathfinders to Venus.