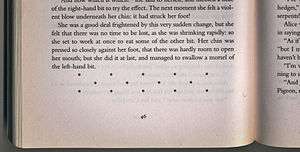 Asterisks used to illustrate a section break in Alice's Adventures in Wonderland.

An asterisk (*; from Late Latin asteriscus, from Ancient Greek ἀστερίσκος, asteriskos, "little star")[1][2] is a typographical symbol or glyph. It is so called because it resembles a conventional image of a star. Computer scientists and mathematicians often vocalize it as star (as, for example, in the A* search algorithm or C*-algebra). In English, an asterisk is usually five-pointed in sans-serif typefaces, six-pointed in serif typefaces,[citation needed] and six- or eight-pointed when handwritten. It can be used as censorship. It is also used on the internet to correct one's spelling, in which case it appears after, or before the correct word.

The asterisk is derived from the need of the printers of family trees in feudal times for a symbol to indicate date of birth. The original shape was seven-armed,[citation needed] each arm like a teardrop shooting from the center.

In computer science, the asterisk is commonly used as a wildcard character, or to denote pointers, repetition, or multiplication.

When toning down expletives, asterisks are often used to replace letters. For example, the word 'fuck' might become 'f*ck' or even '****'.

Fans critical of Barry Bonds, who has been accused of using performance-enhancing drugs during his baseball career, invoked the asterisk notion during the 2007 season, as he approached and later broke Hank Aaron's career home run record.[7] Opposing fans would often hold up signs bearing asterisks whenever Bonds came up to bat. After Bonds hit his record-breaking 756th home run on August 7, 2007, fashion designer and entrepreneur Marc Ecko purchased the home run ball from the fan who caught it, and ran a poll on his Web site to determine its fate. On September 26, Ecko revealed on NBC's Today show that the ball will be branded with an asterisk and donated to the Baseball Hall of Fame. The ball, marked with a die-cut asterisk, was finally delivered to the hall on July 2, 2008 after Marc Ecko unconditionally donated the artifact rather than loaning it to the hall as originally intended.

Many programming languages and calculators use the asterisk as a symbol for multiplication. It also has a number of special meanings in specific languages, for instance:

In the B programming language and languages that borrow syntax from it, like C, PHP, Java, or C#, comments (parts of the code not intended to be compiled into the program) are marked by an asterisk combined with the slash:

Some Pascal-like programming languages, for example, Object Pascal, Modula-2, Modula-3, and Oberon, as well as several other languages including ML, Wolfram Language (Mathematica), AppleScript, OCaml, Standard ML, and Maple, use an asterisk combined with a parenthesis:

CSS, while not strictly a programming language, also uses the slash-star comment format.

In fluid mechanics, an asterisk in superscript is sometimes used to mean a property at sonic speed.[8]

In linguistics, an asterisk is placed before a word or phrase to indicate that it is not used, or there are no records of it being in use. This is used in several ways depending on what is being discussed.

In historical linguistics, the asterisk marks words or phrases that are not directly recorded in texts or other media, and that are therefore reconstructed on the basis of other linguistic material (see also comparative method).

In the following example, the Proto-Germanic word ainlif is a reconstructed form.

A double asterisk indicates a form that would be expected according to a rule, but is not actually found. That is, it indicates a reconstructed form that is not found or used, and in place of which another form is found in actual usage:

Since a word marked with an asterisk could mean either "unattested" or "impossible", it is important in some contexts to distinguish these meanings. In general, authors retain asterisks for "unattested", and prefix ˣ, **, or a superscript "?" for the latter meaning.

Asterisks (or other symbols) are commonly used in advertisements to refer readers to special terms/conditions for a certain statement, commonly placed below the statement in question. For example: an advertisement for a sale may have an asterisk after the word "sale" with the date of the sale at the bottom of the advertisement, similar to the way footnotes are used.

The asterisk has many uses in mathematics. The following list highlights some common uses and is not exhaustive.

as a unary operator, denoted in prefix notation

as a unary operator, written as a subscript

as a unary operator, written as a superscript

as a binary operator, in infix notation

The asterisk is used in all branches of mathematics to designate a correspondence between two quantities denoted by the same letter – one with the asterisk and one without.

In fine mathematical typography, the Unicode character U+2217 ∗ ASTERISK OPERATOR (in HTML, &lowast;) is available. This character also appeared in the position of the regular asterisk in the PostScript symbol character set in the Symbol font included with Windows and Macintosh operating systems and with many printers. It should be used in fine typography for a large asterisk that lines up with the other mathematical operators.

Replacement for cross/crescent/star on ambulances.

In many scientific publications, the asterisk is employed as a shorthand to denote the statistical significance of results when testing hypotheses. When the likelihood that a result occurred by chance alone is below a certain level, one or more asterisks are displayed. Popular significance levels are <0.05 (*), <0.01 (**), and <0.001 (***).

On a Touch-Tone telephone keypad, the asterisk (called star, or less commonly, palm or sextile)[11] is one of the two special keys (the other is the number sign (pound sign or hash or, less commonly, octothorp[11] or square)), and is found to the left of the zero. They are used to navigate menus in Touch-Tone systems such as Voice mail, or in Vertical service codes.

The Unicode standard states that the asterisk is distinct from:

The symbols are compared below (the display depends on your browser's font).