Sir Astley Paston Cooper, 1st Baronet (23 August 1768 – 12 February 1841) was an English surgeon and anatomist, who made historical contributions to otology, vascular surgery, the anatomy and pathology of the mammary glands and testicles, and the pathology and surgery of hernia.[1] 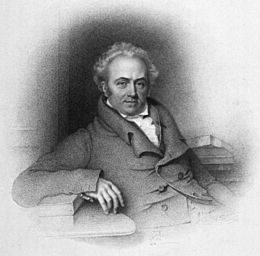 Cooper was born at Brooke Hall in Brooke, Norfolk on 23 August 1768 and baptised at the parish church on 9 September. His father, Dr Samuel Cooper, was a clergyman of the Church of England; his mother Maria Susanna Bransby was the author of several novels. At the age of sixteen he was sent to London and placed under Henry Cline (1750–1827), surgeon to St Thomas' Hospital. From the first he devoted himself to the study of anatomy, and had the privilege of attending the lectures of John Hunter. In 1789 he was appointed demonstrator of anatomy at St Thomas' Hospital, where in 1791 he became joint lecturer with Cline in anatomy and surgery, and in 1800 he was appointed surgeon to Guy's Hospital on the death of his uncle, William Cooper.

In 1802 he received the Copley Medal for two papers read before the Royal Society of London on the destruction of the tympanic membrane; and in 1805 he was elected a Fellow of that society. In the same year he took an active part in the formation of the Medical and Chirurgical Society of London, and in 1804 he brought out the first, and in 1807 the second, part of his great work on hernia, which added so largely to his reputation that in 1813 his annual professional income rose to 21,000 pounds sterling. In the same year he was appointed professor of comparative anatomy to the Royal College of Surgeons and was very popular as a lecturer.

In 1817 he performed his famous operation of tying the abdominal aorta for aneurism; and in 1820 he removed an infected sebaceous cyst from the head of George IV. About six months afterwards received a baronetcy, which, as he had no son, was to descend to his nephew and adopted son, Astley Cooper.[2] He was subsequently appointed sergeant surgeon to George IV, William IV and Queen Victoria. He served as president of the Royal College of Surgeons in 1827 and again in 1836, and he was elected a vice-president of the Royal Society in 1830. In 1821, he was elected a foreign member of the Royal Swedish Academy of Sciences. He died on 12 February 1841 in London, and is interred, by his own desire, in the crypt of the Chapel of Thomas Guy, St Thomas Street (on the site now shared by King's College London and Guy's Hospital).[3] A statue by Edward Hodges Baily was erected in St Paul's Cathedral.

Cooper lived at Gadebridge House in the market town of Hemel Hempstead. Due to his influence, among others who were also residents of the area, his vigorous lobbying ensured that the London to Birmingham main railway line was constructed to the south of the town instead of through it, a more natural course. This led to the citizens of Hemel Hempstead having no railway station in their town, instead being obliged to use the one situated at Boxmoor.

Today, Cooper is remembered in the area with a number of local street names (Astley Cooper Place in the village of his birth, Brooke, Norfolk), (Astley Road and Paston Road in Hemel Hempstead), and The Astley Cooper School, formerly Grovehill school, being renamed after him in 1984. The grounds of his former home are now a public park.

Sir Astley's greatest contribution has probably been in the field of vascular surgery, particularly on cerebral circulation. He was the first to demonstrate experimentally the effects of bilateral ligation of the carotid arteries in dogs and to propose treatment of aneurysms by ligation of the vessel. In 1805 he published in the first volume of Medico-Chirurgical Transactions his attempt to tie the common carotid artery for treating an aneurysm in a patient. In 1808 he tried the same with the external iliac artery for a femoral aneurysm and in 1817 he ligated the aorta for an iliac aneurysm.

Cooper was an indefatigable and original anatomist and identified several previously undescribed anatomical structures, many of which were named after him:

He also described a number of new diseases, which likewise became eponymous:

His chief published works were:

He contributed articles to Rees's Cyclopædia, undoubtedly on Surgery, but the topics are not known.