Aston is a village and civil parish in the East Hertfordshire district of Hertfordshire, England. According to the 2001 census it had a population of 844. Located in Hertfordshire on a ridge between the new-town of Stevenage and the Beane Valley, the village of Aston is just 10 minutes drive from the A1(M). 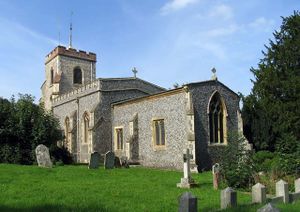 A mile north of Aston lies Aston End, a hamlet which has strong social and geophysical ties with the village. Hooks Cross, another hamlet in the Parish, straddles the A602, Stevenage to Hertford road. Aston is known locally for its conviviality and, despite its modest size, boasts a great many clubs, societies and interest groups as well as hosting a very successful annual school fete. During the reign of Edward the Confessor (1024–66), the manor (i.e. the land) of "Estone" was held by three vassals of Stigend, Archbishop of Canterbury. Their names are not known but some land is recorded as that of Wulf the Dane.

By the time Domesday Book was completed (1086), the small community of Estone, now Aston, was made up of about twenty-five families and included a priest. So it seems that there was a church at that time and it was almost certainly on the site of the present Aston St Mary's.

King William I gave 185 manors, including that of Estone, to his ruthless and ambitious half-brother Odo, Bishop of Bayeux. Odo's deceptions, and his burning aspiration to become Pope, so offended the King that he was sentenced to perpetual imprisonment. His treasures and estates, including Estone, reverted to the Crown

The manor, now in Royal possession, was presented by King Henry I in dower to his second wife, eighteen-year-old Adelicia, upon their marriage in 1121.

In that same year Henry founded the Abbey at Reading. After the King died in 1135, the Dowager Queen visited Reading Abbey on the first anniversary of her husband's death and bestowed on the Abbot and Monks of the Monastery the gift of "Easton" Manor.

Easton, so named at this time, remained under monastic control for three hundred years until the Dissolution (1536–39), when King Henry VIII proclaimed himself supreme head of the Church. The Abbot of Reading, along with two of his clerks, was publicly and brutally murdered for refusing to surrender the Abbey. Distributing the spoils amongst his courtiers, Henry gave the manor of "Aston", for the tenth part of a Knight's fee, and a rent of seventeen shillings and eleven pence, to the local favourite Sir Philip Boteler, Sheriff of Hertford

Sir Philip ruled at Woodhall in the contiguous parish of Watton. To establish himself on his new territory, he chose the site of a ruined building, probably of monastic origin and, using some of the structure and stone from the ruin, he built the manor house which we now know as Aston Bury.

During World War II, Aston House, opposite the church (demolished in the 1960s) was occupied by the Special Operations Executive, engaged in the design, testing and production of explosives and secret weapons for use in sabotage operations and guerilla warfare. See SOE's Secret Weapons Centre STATION 12 - Author Des Turner, for full story.